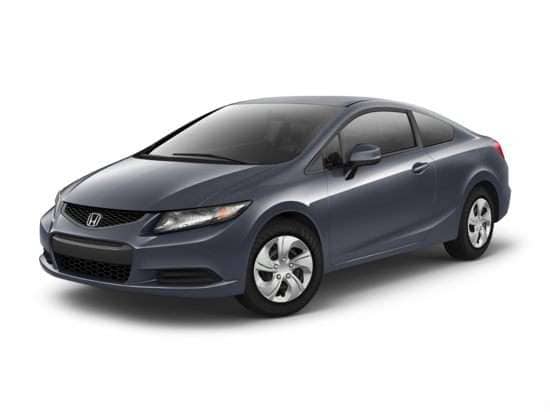 The 2013 Honda Civic is offered as a 2-door coupe or 4-door sedan. Both are sold in LX, EX, EX-L, and sporty Si trim levels. Additionally, the Civic Sedan can be purchased in HF (High Fuel), Hybrid and Natural Gas trim levels.

All 2013 Civic models except for the Si, Hybrid, and Natural Gas versions are equipped with a 140-horsepower, 1.8-liter 4-cylinder engine. The Civic LX comes standard with a 5-speed manual gearbox, while the EX, HF, and EX-L models get a standard 5-speed automatic transmission. Civic Natural Gas models have a version of the standard engine designed to operate on compressed natural gas (CNG), and it produces 110 horsepower. The 2013 Civic Si has a 2.4-liter 4-cylinder engine making 201 horsepower. A 6-speed manual gearbox is the only transmission for the Si model.

Civic Hybrid models pair a 1.5-liter 4-cylinder gasoline engine with an electric assist motor and a Lithium-ion battery pack. Combined, the hybrid powertrain makes 110 horsepower, fed to the front wheels through a continuously variable transmission (CVT). The Civic Hybrid is what is called a “mild hybrid,” meaning that unlike most hybrid cars on the market, it cannot operate solely on electricity from its battery pack at low to moderate speeds.

According to the EPA, the 2013 Civic LX, EX, and EX-L models are rated to get 32 mpg* with the automatic transmission. The Civic LX with a manual transmission gets 31 mpg, as does the Civic Natural Gas using a gasoline gallon equivalent calculation**. The two most fuel-efficient models in the Civic lineup are the Civic HF at 33 mpg, and the Civic Hybrid at 44 mpg. The least fuel-efficient model is the performance-oriented Civic Si, which is rated to return 25 mpg.

* All mpg ratings expressed as the number for combined driving

Thanks in part to its revised structure, the 2013 Honda Civic is named a “Top Safety Pick Plus” according to the Insurance Institute for Highway Safety, which gives the Civic its top rating of “Good” in the new small overlap frontal-impact test. As this model summary is written, the NHTSA has not performed crash tests on the 2013 Civic models.

For the 2013 model year, Honda adds Bluetooth connectivity with music streaming capability, SMS text messaging capability, a USB port, an iPod connection, Pandora Internet radio, and a reversing camera as standard equipment on every Civic. Models with the optional navigation system get a multi-view reversing camera as a replacement for the standard unit. Honda plans to offer a Lane Departure Warning system and a Forward Collision Warning system for the Civic Hybrid.