Nothing lasts forever in the automotive business.  After years of dominating the affordable compact performance scene, the Honda Civic Si has in recent times found itself facing stiff competition from a host of vehicles built by companies that had finally clued in to the fact that scores of entry-level shoppers were willing to pay a bit more for a hot ride.

Seeing the Civic Si move from segment leader to merely one choice amongst many surprisingly had little effect on Honda's development program for the vehicle.  When the redesigned 2012 Honda Civic debuted this past year, bringing with it the next-generation Si model, loyal buyers found themselves looking at less of an evolution of the previous car and more a maintenance of the status quo - albeit one that had decidedly more of an economy feel to it than Civic Si shoppers were used to.

Honda's decision to hold its ground has put the 2012 Honda Civic Si Coupe in an awkward position in an area of the new car market that has rocketed onward and upward in terms of power, poise, and premium features.

The 2012 Honda Civic Si Coupe dives head-first into a crowded pool of compact cars with a performance edge.  When looking at two-door automobiles in its price range, the Hyundai Genesis Coupe, the Subaru BRZ / Scion FR-S twins, and the Chevrolet Camaro and Ford Mustang V-6 all come to mind.  Each of these models at least equals the Civic Si in terms of horsepower, with several eclipsing the Honda by over 100 ponies.  Broadening the search to include hatchbacks and sedans introduces contenders such as the Mazda MAZDASPEED3, the Subaru WRX, the Nissan Sentra SE-R, the Volkswagen GTI, and the upcoming Ford Focus ST.  These vehicles may in some cases cost slightly more than the Si, but they are clearly making a play for the same buyers who might consider getting behind the wheel of a Civic.

The 2012 Honda Civic Si Coupe features a starting MSRP of $22,355.  The Si Coupe can be had in several different trims that refer to its equipment level: the Summer Tires edition (MSRP $22,555), the Honda Satellite-Linked Navigation System with Voice Recognition edition (MSRP $23,855) and the top-tier model that combines each of these trim levels together (MSRP $24,055).

Our week-long test vehicle was a Canadian-market Honda Civic Si Coupe.  In Canada, the Si Coupe starts at the U.S. model's highest trim level, and is priced at an MSRP of $25,990 CAD.

The 2012 Honda Civic Si Coupe's redesign brought with it several changes to the vehicle's visual personality.  The Civic Si Coupe's front fascia has been given a chunkier, more aggressive look compared to last year's sleek lines, an effect that highlights the two-door's short hood.  A more pointed greenhouse with an abrupt rear hatch slope also helps the Civic Si stand apart from older editions of the car.

The wider grille opening set into the front bumper is quite attractive, and the somewhat scalloped sheet metal that cuts in just before the rear wheel wells is also a nice touch, but when seen from behind the back bumper's somewhat overworked side skirts and high center cut give the Si Coupe an awkward stance.  In fact, dropping the car's ride height would have done wonders to improve the first impression made by the car.  Essentially, while the Honda Civic Si Coupe offers several pleasing viewing angles, it doesn't come together as a cohesive package that can be enjoyed from all vantage points.

The 2012 Honda Civic Si Coupe's passenger compartment comprises a frustrating blend of inexpensive plastics, nearly-there ergonomics, and difficult to use features.  It's impossible to ignore the vehicle's split gauge package, which centers an analog tachometer directly in front of the driver while mounting a digital speedometer, fuel monitor, and other readouts inside a rectangular pod that sits on top of the dashboard.  Nestled to the left of the speedometer is a VTEC readout, which lights up sequentially until the Civic Si Coupe's variable valve timing has been activated high in the rev range, while to right drivers will find a small vehicle information screen that can be paged through via the use of steering wheel-mounted buttons.

The LCD screen found on top of the dash provided a glimpse into fuel mileage, offered a somewhat unusual bar graph representing the amount of power currently being generated by the engine (expressed as a percentage), a blank screen, and a wallpaper image that could be loaded in by the driver, if desired.  A particularly glaring omission from the Civic Si's gauge package was the lack of an engine temperature monitor.  Surely, in a performance car an allowance could have been made for more than a simple blue light that illuminated while the motor was 'cold.'  We would have gladly sacrificed the engine output percentage screen for such a useful measurement.

Another feature that was notable by its absence was the lack of automatic climate control in our high trim level Si Coupe.  Hanging underneath the dash near the centerline of the car (slightly angled towards the driver) were two simple dials and a smattering of buttons for interacting with the Civic's heating and cooling features, but no 'auto' button was to be found.

Set directly above the climate controls was a small navigation screen that also doubled as an interface for the automobile's sound system and Bluetooth / hands-free calling features.  The navigation system was not difficult to use via the touchscreen, but the stereo took a little bit more work to master.  Voice commands were completely out of the question - we were unable to get the Civic Si Coupe to understand anything we said other than 'Help,' and even that phrase had to be carefully enunciated to the ceiling in order to generate a positive response from the system.  We also found it impossible to link a Bluetooth device to the car, with each attempt ending with the discovery that the necessary button on the touchscreen was grayed out.  This may have been related to the number of devices already paired with the Honda - it was, after all, a press car - but we were unable to suss out the exact reason for the lack of pairing success.

Perhaps the most irritating aspect of the navigation screen was its inability to automatically dim itself at night.  While all of the other lights inside the Honda Civic Si Coupe grew less bright once the exterior lights had switched on, we were forced to hit a small day/night button to the left of the screen, then push a tab on the touchscreen, and finally hit OK before the LCD panel would switch over to a more acceptable brightness.  This occurred each and every time we drove the vehicle after dark.

The Honda Civic Si Coupe's seats were grippy and supportive up front, offering enough bolstering to keep most riders in place while cornering.  The rear row of accommodations, like most coupes in its class, was not a pleasant place to be, even for shorter riders, due to the low roofline that cut significantly into headroom.  The back seats did serve as a good spot for carrying cargo, however.

The 2012 Honda Civic Si Coupe trades in its previously rev-happy, small-displacement four-cylinder engine for a somewhat larger four-banger borrowed from the Acura TSX.  The Si Coupe now comes with a 2.4-liter motor that is good for 201 horsepower and 170 lb-ft of torque, with the latter figure representing a 22 percent increase over the production of the 2011 model's engine.  Fuel mileage improves to 22-mpg in stop and go driving and 31-mpg on the highway, and a six-speed manual transmission is the only available gearbox for the compact two-door.

The 2012 Honda Civic Si Coupe clearly benefits from the increased grunt of its new engine, especially considering that torque delivery now comes at a significantly lower rpm than ever before.  Whereas the 2011 Civic Si required drivers to rev its motor all the way up to nearly 8,000 rpm, the current engine's 7,000 rpm redline and more accessible twist make the 2012 version of the car much easier to drive smoothly within city speed limits.

That being said, the Si Coupe's performance personality doesn't actually reveal itself until the tachometer has swept over to the rightmost side of the gauge and the VTEC lights have fully illuminated, meaning that it's still necessary to push the car hard in order to wring out every last bit of fun from its power plant.  The Civic Si certainly provides 'adequate' acceleration, but it doesn't feel nearly as fast as competitors like the Subaru WRX or the MAZDASPEED3 - and objectively, it's not, falling short of both when measuring acceleration times to 60-mph or on the quarter mile.

Other aspects of the Honda Civic Si Coupe's drivetrain shine brighter than what is contained under the hood, especially its excellent six-speed manual transmission (also on loan from the TSX).  The shifter's throws are so precise and short that they can be executed with the soft touch of two fingers, if desired, making it one of the more pleasant gearboxes in its segment.  Unfortunately, engine over-run with the clutch pedal depressed dampens the transmission's sporty feel.  The vehicle also offers an effective limited-slip front differential that does a commendable job of applying the Coupe's traction to the pavement even when the pedal is pinned around corners.

Handling for the Civic Si Coupe feels buttoned down, with the suspension system sticking the car to the road during more spirited sessions behind the wheel.  Braking was also quite solid.  As with most front-wheel drive compacts, understeer will rear its head when the car is asked to negotiate a corner more quickly than it would like, but the limits for the Coupe's chassis are quite high.  Unfortunately, the price paid for this level of competence is a stiff ride that manifests itself when driving on bumpy roads, occasionally filling the cabin with a small booming sound as the rear wheels travel over particularly rough patches of road.

The 2012 Honda Civic Si Coupe comes with the standard number of airbags required to ensure maximum passenger protection: dual-stage forward units, seat-mounted side airbags mounted to the vehicle's front seats, and side curtain airbags that deploy along the entire length of the passenger compartment.  Electronic stability control, traction control, and anti-lock brakes are included free of charge, and the Civic has been rated a Top Safety Pick by the Insurance Institute for Highway Safety.

The 2012 Honda Civic Si Coupe is in danger of becoming a museum piece, an automobile that once led the same pack that it now finds itself straggling behind.  The Civic platform has suffered from shortsighted decisions made by Honda during the depths of the financial crisis, sending the vehicle in the opposite direction of its competitors which are almost across the board capable of offering a more upscale interior, better power, and equal handling prowess.  Driving the Civic Si Coupe is by no means unpleasant, but it certainly doesn't inspire drivers the way a high performance model should, nor does it live up to the raw and uncompromising edginess of past Si editions.

A near-term refresh is in the cards, as Honda has acknowledged that the Civic is in need of an update in order to regain its status as not just an appealing compact performance car but also a vehicle that entry-level shoppers would be proud to park in the driveway.  With so many attractive competitors out there, the Civic Si Coupe doesn't quite make the impression required to convince buyers to part with their fun-seeking dollars.

What We Like About The 2012 Honda Civic Si Coupe 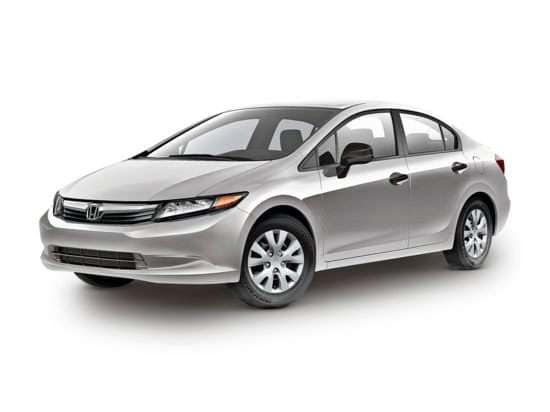