The new standard by which sport compact cars must be measured

Photo 1 -- Exterior Front
By Christian Wardlaw
Sometimes, even the great ones lose their way. Ernest Hemmingway, Marilyn Monroe, Elvis Presley, Kurt Cobain – all talented, tormented pop culture figures who met untimely ends. Neither fame, nor fortune, nor fan adoration could save them from themselves. The same could be said of the Honda Civic Si, which has “died” on three separate occasions in its short 20-year lifespan, despite being among the most loved, cherished and revered nameplates in the history of Japanese automobiles.

Honda, known more for technological innovation, environmental responsibility, and relentlessly reliable cars and – more recently – trucks, falters infrequently. But after the sweet Civic Si Coupe, the pinnacle of the Si dynasty, was cancelled after the 2000 model year, Honda followed up with a funky looking, English-built hatchback that had its shifter jutting out of the dashboard, rally-style. No, this stumble wasn’t a hip crusher like the Civic CRX/del Sol debacle of the early 1990s, but the shine came off the Si badge just the same.

Now, for 2006, in celebration of the 20th anniversary of the Civic Si, Honda unleashes a completely redesigned version of its performance icon, based on a two-door coupe body style and sporting enough fun-to-drive hardware that it instantly becomes the new standard by which sport compact cars must be measured.

To distinguish the 2006 Honda Civic Si from other Civic coupes, it gets a functional rear wing spoiler that cuts drag and reduces lift, a chrome-dipped oval exhaust tip, a red-lettered “Si” badge on the decklid, and a decal just forward of the rear wheel wells that reads “i-VTEC DOHC.”

The 2006 Honda Civic Si receives subtle changes to announce its performance-tuned intent. The headlights get amber-colored trim, the lower air dam is reshaped to direct cool air to the brakes, and the wheels are an appealing twin-spoke design. Color choices include white, black, silver, and gray, plus two exclusive colors: Habanero Red Pearl and Fiji Blue Pearl. The only interior color is black.

Powered by Honda’s so-called K-Series engine, the 2006 Honda Civic Si has a 2.0-liter, DOHC, i-VTEC motor under the hood that makes 197 horsepower at 7,800 rpm and 139 lb.-ft. of torque at 6,200 rpm. Redline is 8,000 rpm, and a warning light flashes in the gauge cluster when that limit is approaching. Meeting LEV2-LEV emissions in the U.S., this engine is estimated to deliver 22 mpg in the city and 31 mpg on the highway. Premium fuel is required.

For the first time in North America, Honda installs a six-speed manual transmission in the 2006 Civic Si. Power flows to the front wheels, where, in tight turns, a helical limited-slip differential transmits torque to the outside wheel to decrease the tendency for the inside wheel to spin and break traction. An automatic transmission is not available on the 2006 Honda Civic Si.

Inside the 2006 Honda Civic Si, new seats with stiff bolsters, special suede-like trim, sporty red stitching, and an “Si” logo embroidered onto the backrest do a terrific job of holding the driver in place during hard cornering. The driver’s seat features a manual height adjuster, and with the standard tilt and telescopic steering wheel, it’s easy to find a perfect driving position. Getting into the back seat from the passenger’s side is relatively easy, thanks to a tilt and slide front chair and a large door opening. But for larger adults, the Civic Si’s rear quarters should be used only for short distances.

It might look radical, but the 2006 Honda Civic Si’s interior layout is extremely functional. Gauges are split between a digital display located at the base of the windshield and a traditional cluster viewed through the steering wheel. In the digital display, which acts much like a heads-up system, vehicle speed, remaining fuel, and engine temperature are shown. A rev-limit indicator located here will flash when revs pass 7,400 rpm on the way to the engine’s 8,000 rpm redline.

Located front and center is a huge tachometer that blinks when the 2006 Honda Civic Si’s engine revs beyond 7,400 rpm and then goes solid red when the driver exceeds the 8,000 rpm redline. Warning lights for various vehicle functions are hidden in the darkened fields on either side of this single gauge – we wish Honda supplied a conventional analog speedometer, too.

The 2006 Honda Civic Si focuses as much on safety as it does performance. Standard equipment includes dual-stage, dual-threshold front airbags; seat-mounted front side airbags; front and rear side curtain airbags; antilock brakes with independent electronic rear brake distribution; and active head restraints. Honda expects the 2006 Civic Si to receive five-star frontal crash-test ratings from NHTSA and a “Good” rating from the Insurance Institute for Highway Safety (IIHS) in the 40-mph offset crash test. Furthermore, Honda predicts that the Civic Si will get a ‘Good” rating from the IIHS for side-impact protection, with NHTSA assigning a four-star front occupant side-impact score and a five-star rear occupant side-impact score.

Incredibly, Honda expects the starting price of the 2006 Civic Si to be less than $20,000 when the car goes on sale December 1, 2005. It comes fully equipped out of the box, but there are a handful of optional features available. Extra-cost items include the navigation system with XM satellite radio, the Michelin Pilot Exalto PE2 performance tires, and any other dealer-installed items like 18-inch wheels and tires. Plus, as the featured car at the Specialty Equipment Marketing Association (SEMA) convention this November, you can bet on a wide variety of aftermarket parts to pimp this ride.

Wow, the 2006 Honda Civic Si is really nailed down. Its power band feels flatter than the Acura RSX Type S, with more torque coming on earlier in the game, and the blinking rev-limiter light is a nice touch. The helical limited-slip differential effectively scrubs understeer in tight hairpins, and the summer performance tires stick to the road like Rove on Bush. The six-speed gearbox is tighter and more pleasurable to use than the EX Coupe’s five-speed unit, and the pedals are set up for easy heel-and-toe action. Steering feels better too, quicker and with added heft off-center, though the electric drive-by-wire nature of the system produces little actual road feel. In terms of braking, the Civic Si feels like it can stop on a dime, and the suspension provides a taut ride, producing excellent communication with the road.

On the track, the stock Civic Si’s body dove, squatted, and leaned more than a track-ready set of wheels, taxing the Michelin summer tires to some degree, but these character traits detracted not at all from the fun and aren’t discernable on real roads in the real world. And to the car’s credit, we drove it as hard as we could and experienced only a hint of brake fade on the final two laps – and then only when braking hard from near triple-digit speeds. We even checked the Michelins’ front sidewalls after the flogging, and the shoulders of the tread still looked great. Heel-and-toe shifting is easy, the shift lever falls readily to hand, and there aren’t any uncomfortable spots where the driver’s legs brace for turns. The Civic Si’s thickly bolstered seats hold the driver still, and sightlines are good even if the A-pillars are a tad thick for track work. And, the car will even rotate a bit if you trail brake into a tight corner.

With the introduction of the 2006 Civic Si, Honda celebrates the performance model’s 20th anniversary. The Civic Si first debuted as a 91-horsepower hatchback in 1986, riding on 13-inch, 70-series rubber. A 1989 redesign brought a 108-horsepower engine and 14-inch wheels running P185/60 tires. The 1992 model rode on those same size tires, stopped now with four-wheel-disc brakes and powered by a 125-horsepower motor equipped with VTEC technology. The 1999 Honda Civic Si Coupe – the best of the breed until this year – whipped up 160 ponies and included a sport suspension riding on P195/55R15 treads. The 2002 model returned the Si to its hatchback origins, adding ABS and 16-inch wheels to the mix. The motor didn’t make more horsepower, but torque was greater and peaked at lower rpm. The 2002 Civic Si also had a funky console-mounted shifter, like a rally car. 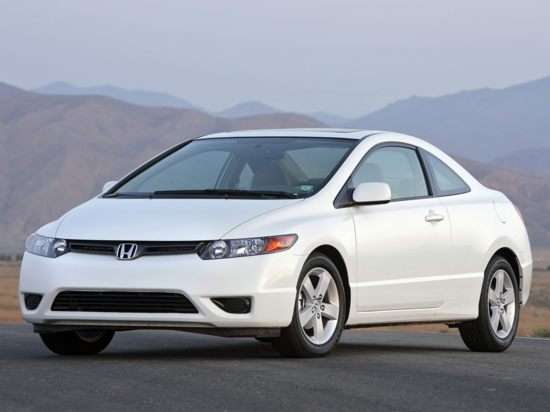