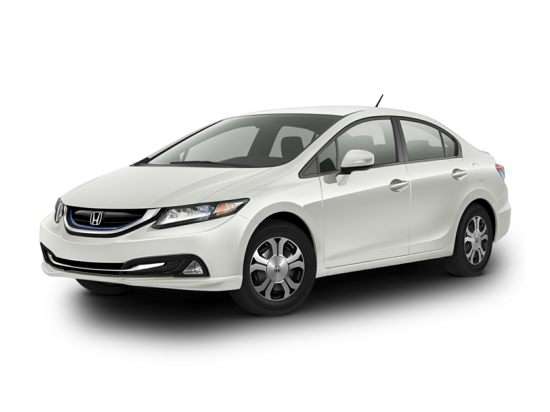 Changes for the 2013 Honda Civic Hybrid:

Like the rest of the 2013 Honda Civic Sedan lineup, the Civic Hybrid model has restyled front and rear ends, interior improvements including upgraded materials, a longer list of standard features, recalibrated steering, refined suspension tuning, new SmartVent side-impact airbags, and a stronger Advanced Compatibility Engineering II body structure. The 2013 Civic Hybrid is equipped with a longer list of standard features, and is the only Civic offered with Lane Departure Warning and Forward Collision Warning systems*.

Honda sells two versions of its 2013 Civic Hybrid, one without leather seats, and one with leather seats. Models with leather seats include heated front seats, heated side mirrors with integrated turn signal indicators, and a leather-wrapped steering wheel. Either Civic Hybrid can be upgraded with a navigation system that adds a multi-angle reversing camera and real-time traffic information.

The 2013 Honda Civic Hybrid is what’s known as a mild hybrid, meaning that it cannot operate at low speeds on battery power alone. Instead, the Civic Hybrid’s 1.5-liter gasoline engine is always operational, except as the car coasts to a stop and when the car is idling in traffic or at an intersection. The gas engine is assisted by an electric motor powered by a Lithium-ion battery pack that is recharged by a regenerative braking system. A continuously variable transmission (CVT) delivers the combined 110 horsepower to the Civic Hybrid’s front wheels.

As a part of the upgrades bestowed upon the Civic Hybrid for 2013, Honda engineers strengthened the car’s underlying structure, employing what the automaker calls Advanced Compatibility Engineering II (ACE II). Thanks in part to this update, the Insurance Institute for Highway Safety named the Civic Hybrid a “Top Safety Pick Plus,” reflecting the car’s excellent performance in the Institute’s new small overlap frontal-impact crash test. Unfortunately, as this model summary is written, the National Highway Traffic Safety Administration has not performed crash tests on the updated 2013 Civic Hybrid.

New standard features for the 2013 Civic Hybrid include Bluetooth music streaming, SMS text messaging, Pandora Internet radio, and a reversing camera. When the optional navigation system is added to the car, a multi-view reversing camera replaces the standard single-view unit. Honda also plans to offer a Forward Collision Warning system and a Lane Departure Warning system for the Civic Hybrid.