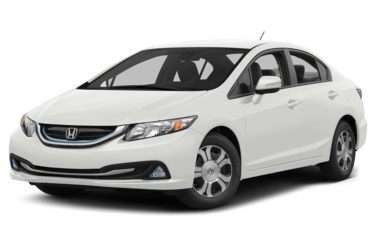 All About Honda Civic Hybrid

The first generation of the Honda Civic Hybrid, from 2001 until 2005, featured a five-speed manual transmission, although that gearbox was phased out at the end of the first generation in favor of a CVT automatic transmission. The combined power yield of the gasoline engine and electric motor was 93 horsepower, and achieved a 0-60 acceleration time of 10.9 seconds. The drivetrain also used nickel-metal hydride batteries. The manual transmission version of the Civic Hybrid earned EPA fuel economy ratings of 46 mpg in the city and 51 mpg on the highway. It was calculated to be about 40 percent more efficient than the traditional gasoline version of the Civic. These fuel economy gains were due mostly to the hybrid drivetrain, but the Civic Hybrid also employed a feature that shut off the gasoline engine when the car was stopped, preventing it from wasting fuel at idle. The Civic Hybrid also featured some exterior refinements from the regular Civic to improve aerodynamics, including a different front air dam and spoiler, improved underbody panels, and a new electric power steering system. The tires were also changed for lower rolling resistance.

In 2006, the second generation of the Honda Civic Hybrid was introduced, to coincide with the new eighth generation Honda Civic. The second generation of the Civic Hybrid remained in production until 2011. The hybrid powertrain system was similar to that of the previous generation, but there were some upgrades, such as lightweight alloy wheels with an aerodynamic design, a more powerful electric motor that yielded slightly higher horsepower (for a total of 110 horsepower), as well as a revised battery design that had more capacity but was smaller. EPA fuel economy ratings increased to 49 mpg city and 51 mpg highway. (These ratings decreased in the 2008 model year, but it was due to the way the EPA calculated its projections, rather than due to changes in the car itself.) The second generation Civic Hybrid yielded an estimated fuel economy increase of 63 percent in the city and 27 percent on the highway over a similarly equipped eighth generation gasoline Civic. This Civic Hybrid also featured a digital and LED instrument display that showed the driver how the car was using its power, to help the driver learn to operate the car as efficiently as possible.

The third generation of the Honda Civic Hybrid was introduced in 2011 as a 2012 model. The gasoline engine was upgraded from the previous 1.3-liter unit to a 1.5-liter unit. The battery pack was changed to a lithium-ion design. Along with a minor increase in horsepower, the EPA fuel economy calculations were also an improvement over the 2008 model year ratings; the third generation Civic Hybrid was estimated to yield 44 mpg for both city and highway driving. The Civic Hybrid sedan was produced in Japan for most of its life, but moved to a Honda facility in Indiana in 2013. The introduction of the Civic Hybrid hatchback meant that the sedan version would be discontinued in Europe and only the hatch would be sold, based on Europe’s general preference of hatchbacks to sedans.