With writer Tony Quiroga calling it "proof that millions can be served, and still be served, the best," the 2015 Honda Accord has been named to the ranks of Car and Driver's 2014 10Best Cars. It's an impressive honor, of course, but also one that has become a routine accomplishment for the Accord: The nameplate now has claimed 29 10Best trophies during the award's 31-year history.

The secret to that success is no secret, either. Like its prize-winning predecessors, the 2015 Honda Accord provides all of the family-friendly packaging demanded by customers in the midsize segment, yet also serves up the kind of driving dynamics preferred by enthusiasts. For example, Eddie Alterman, editor-in-chief of Car and Driver, added that the 2015 Honda Accord "offers terrifically fluid and sporty handling, while functioning perfectly for everyday use. It's light on its feet and very driver-oriented, even if many of its drivers will never explore the full range of its dynamic capabilities. The Accord is an undercover sports sedan, and that's what resonates with our editors year after year."

The 2015 Honda Accord even remains available with a standard six-speed manual transmission that can be paired to both four- and six-cylinder powerplants. Those are fairly peppy engines, too, with the former making 185 hp and 181 lb.-ft. of torque in its standard trim and the latter tacking on almost 100 more horses to reach 278 hp and 252 lb.-ft. of torque. The 2015 Honda Accord then builds on that power by sporting EPA grades of 27 mpg city/36 mpg highway/31 mpg combined with its 2.4-liter I4 and up to 21 mpg city/34 mpg highway/26 mpg combined even using the 2.5-liter V6. And remember, the 2015 Honda Accord is available with hybrid and plug-in hybrid powertrains as well. 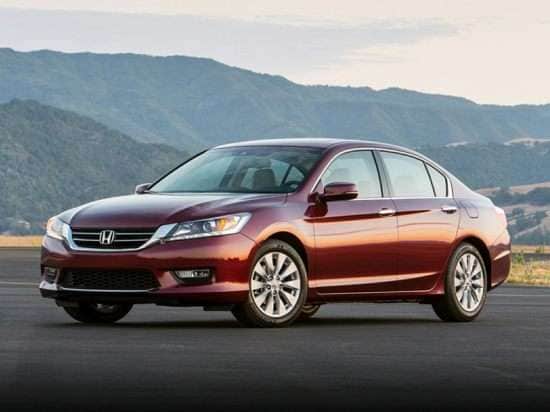