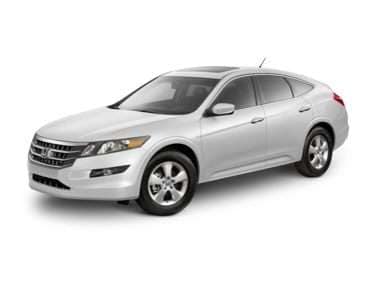 All About Honda Accord Crosstour

The Accord Crosstour’s drivetrain features two engine options: an inline-four that produces 192 horsepower, mated to a five-speed automatic transmission, and a front-mounted 3.5-liter V6 engine that yields 278 horsepower and is paired to a six-speed automatic transmission. The Crosstour comes standard in front-wheel-drive, but buyers of the V6 engine can opt for an all-wheel-drive upgrade. The base model’s four-cylinder engine earned Environmental Protection Agency fuel economy ratings of 22 miles per gallon city, 31 highway, and 25 combined. Fuel economy suffers just slightly when upgrading to the V6; that drivetrain is rated for 20 miles per gallon city, 30 highway, 23 combined. Four-cylinder Crosstours get 17-inch alloy wheels; V6 models get an upgrade to 18-inch alloys.

In 2012, Honda decided to drop the “Accord” from the name, leaving the vehicle to stand on its own as the Crosstour. This is also when the aforementioned four-cylinder engine option became available; early Crosstour buyers all got the V6.  The next model year, 2013, the Crosstour received a facelift that was previewed at the New York International Auto Show in April of 2012. The revised Crosstour saw a minor drop in the base price as well as a handful of new standard features. The V6 drivetrain got minor upgrades to improve fuel efficiency, the interior was redesigned, and drivers were treated to a new 10-way power seat. Options for that model year included a lane departure warning system, a forward collision warning system, and an upgraded rear view camera with additional viewing angles. The Honda Crosstour is scheduled to remain in production through the 2014 model year.