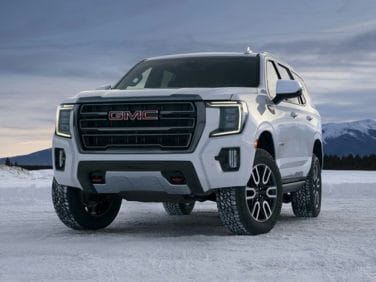 All About GMC Yukon

The GMC Yukon is a four-door full-size SUV that seats up to nine passengers. The GMC Yukon is manufactured in Arlington, Texas alongside the Chevrolet Tahoe, Chevrolet Suburban and Cadillac Escalade. Main competition to the Yukon include the Ford Expedition, Nissan Armada and Toyota Sequoia.

The GMC Yukon first made its appearance well over a decade ago. The original vehicle was basically a shorter version of the Chevrolet Suburban and was aimed for the active drivers looking for a truck, some serious towing capacity and off-road capability. The Yukon was only available as a two door from 1992 to 1994. A four door variation arrived in 1995. Various adjustments and upgrades were done in the following years. In 1995 a driver side air bag became standard alone with a now look for the instrument panel. In 1997 the passenger side gained an air bag. The GMC Denali arrived in 1999, making a splash. The GMC Yukon was totally redesigned in 2007 and entered 2008 with minimal to no change. In GMC’s line, the Yukon fits between the Chevrolet Tahoe and Cadillac Escalade. The two-mode hybrid model arrived late in 2007 as well, offering a healthy 25% improvement in the fuel economy.

The Yukon is one of the more expensive SUVs on the market, however it is one of the more fuel efficient as well. The 2008 Yukon comes in four trims, the SLE1, SLE2, SLT1, SLT2. For the base SLE 1, there is a 4.8 L V8 engine offering 290 horsepower. The SLE2 has more horsepower at 320 hp. The SLT2 adds luxury and the SLT2 comes with all the extras. It’s also possible to move up a level to GM’s Active Fuel Management system. This has the ability to shut off four of the eight engine cylinders when they aren’t needed for speed or acceleration. GM also offers this engine as a Flex Fuel engine. All of these engines come matched with a four-speed automatic transmission.

The EPA fuel economy rating sets the 2008 Yukon at 16 miles per gallon in the city and 22 mpg on the highway. Another forward thinking step on GM’s part to improve fuel economy is the availability of E85 ethanol Flex-Fuel configurations. Another big advantage to the Yukon is its towing capacity. This truck can haul some serious tonnage. It can tow 7,700 pounds at the same time it carries nine adults. Or carry less passengers and a lot of cargo, the result is still the same, the Yukon has the power to deliver a smooth ride and solid performance.

This truck is no small import and size matters when it comes to safety. Standard features on this vehicle include StabiliTrak traction control system, four-wheel drive disc anti-lock brakes, tire pressure monitor, dual-stage air bags with a front passenger sensing system, daytime running lights, theft deterrent system and keyless entry. In the government crash tests, the GMC Yukon receives a five star rating for frontal and side crash tests. However, in the rollover crash tests, the Yukon only receives a three star rating.

The 2009 GMC Yukon is a carryover from 2008. The 2009 Yukon comes in a two different wheelbases and several different trims. The standard Yukon can be ordered in both SLE 3SA and 3SB and SLT 4SA and 4SB trim. The base engine found in the SLE 3SA is a 4.8 liter V8 good for 295 horsepower and 305 lb-ft of torque. A 4-speed automatic transmission is provided, and fuel economy is rated at 14 miles per gallon in city driving and 19 miles per gallon on the highway. Buyers can choose to upgrade to either a Flex Fuel or standard gasoline edition of the company’s 5.3 liter V8, which provides 320 horsepower and 340 lb-ft of torque and fuel mileage of 15 miles per gallon around town and 21 on the highway. The standard gasoline version of this motor is standard across each trim above the base model, and a four-speed transmission is again the only transmission choice.

The extended wheelbase Yukon XL is also offered in the same trim levels as the shorter edition of the SUV, but the engine choices begin with the 5.3 liter V8. Also on tap as options are the Flex Fuel version of the 5.3 as well as two different versions of a 6.0 liter, 366 horsepower 8-cylinder, one of which uses active fuel management and one of which doesn’t. The latter is relegated to the three-quarter ton edition of the Yukon XL. Both provide 12 miles per gallon in city driving and 17 miles per gallon on the highway, and while the standard Yukon XL uses the same 4-speed automatic as the smaller version of the SUV, the three-quarter ton model avails itself of a 6-speed automatic.

All versions of the Yukon can be ordered with four-wheel drive, with the exception of the Denali trim which is all-wheel drive only.