Already firmly in command of the full-size sport/utility vehicle market – 70 percent of those sold today wear a Cadillac, Chevrolet, or GMC badge – General Motors has taken a big step toward preserving its dominance of the highly profitable segment by redesigning its entire lineup of big SUVs for the 2015 model year. That makes the Cadillac Escalade and Escalade ESV, Chevrolet Suburban and Tahoe, and GMC Yukon and Yukon XL the most sophisticated and technologically advanced vehicles of the breed.

But does it also make them the best, not only when it comes to full-size SUVs but also as a solution for your family? To find out, my own brood spent a week with a 2015 Yukon XL Denali.

My Yukon XL Denali test vehicle was as luxurious as it gets without popping for a fully pimped Cadillac Escalade. Denali models are set apart from other Yukons by unique exterior styling details, premium interior materials, a larger and more powerful engine, and lots of upgrades for a starting price of $67,665, including a destination charge of $1,195. For the record, that’s a little bit less than a fully loaded Yukon XL SLT with all the extras.

The result of paying this much for a GMC Yukon is a really terrific looking truck, the Denali trim adding the right amount of bling without going over the top. Plus, the Denali is more rare on the road than sister vehicles in the form of the Chevy Suburban and Cadillac Escalade ESV.

Inside, the Denali is just upscale enough and in the right ways to make occupants overlook the hard plastic surfaces that do exist. This cabin represents a clear improvement over the previous Yukon XL, the soft and perforated leather, the exposed stitching, the soft-touch surfaces, and tasteful real aluminum accents and genuine wood trim creating a cabin in which you want to spend lots of quality time with those people closest to you.

A GMC Yukon XL Denali has three rows of comfortable seats and can hold lots of stuff, but changes for 2015 reduce the amount of maximum cargo space. Previously, you could lift the third-row seats out of the SUV creating an impressive amount space behind the second-row seats. Those days are over.

Now, the third-row seats power themselves flat, expanding cargo room from 38.9 cu.-ft. to 76.7 cu.-ft. That’s still an impressive figure, but amounts to less than before. Nevertheless, you can still carry up to six people in a Yukon XL at the same that you’re hauling more cargo than any Honda CR-V or RAV4 can hope to swallow. Fold the Yukon XL’s second-row seats flat and this SUV accommodates 121.1 cu.-ft. of your stuff.

With that said, all three measurements are reduced compared to the old Yukon XL. Cargo space drops by 6.9 cu.-ft behind the third-row seat; by 13.3 cu.-ft. behind the second-row seat; and by 16.3 cu.-ft. in terms of maximum volume. They’re also smaller than what a Ford Expedition EL or a Lincoln Navigator L supplies.

As far as comfort is concerned, my Yukon XL Denali came with power retractable running boards that made getting into and out of this SUV much easier for both adults and children. The front seats provide multiple power adjustments, and in combination with a power tilt/telescopic steering wheel and power adjustable pedals, a perfect driving position is easily achieved. Better yet, after carrying a 3-year-old on my shoulders for a good part of a day at a theme park, the fact that I could apply heat solely to the backrest and not the cushion made me a happy middle-aged man.

I didn’t spend much time in the second-row captain’s chairs, but upon brief inspection they provide good legroom and decent thigh support even if they feel a little too low to the floor. One thing GMC has done is to improve entry and exit with regard to seat position and the doorframe; it is much easier to climb into and out of this new Yukon XL. However, the only way to secure my child safety seat’s top tether strap was to thread the strap around, rather than over, the headrest.

I did ride in the Yukon XL’s third-row seat for more than an hour, and the experience reminded me of traveling in the last row of coach class with the dude in front me fully reclined, and then hitting lots of turbulence. This, despite a standard Magnetic Ride Control suspension that is supposed to smooth out the road, and the ride.

The Yukon XL Denali includes a long list of features and technology, yet this SUV is fairly easy to understand and use. A mixture of familiar buttons, knobs, and stalks control most functions, and it appears that General Motors is simplifying iconography to make using the Yukon easier and more intuitive.

As for the Denali’s advanced infotainment technologies, you’ll occasionally need to crack the owner’s manual for clarification, but for the most part the latest iterations of GMC’s IntelliLink infotainment system and Driver Information Center are more intuitive than ever before. Even the rear-seat entertainment system with its Blu-Ray DVD player is easy to use.

I’m a big fan of the Yukon XL Denali’s Safety Alert Seat design. Connected to the SUV’s blind spot warning, cross-traffic alert, lane departure warning, and forward collision warning systems, the seat vibrates to get the driver’s attention, and can vibrate just on the side where a threat exists. It worked well to identify a car zooming down my residential street as I reversed from my driveway, and after that I was sold.

The Yukon XL’s standard OnStar services technology includes Automatic Crash Response, which will automatically dial out for help after the SUV’s airbags deploy in a collision. The OnStar operator will then help speed rescuers to the scene of the accident, even if the Yukon’s occupants are unresponsive. GMC includes a free subscription to this service for the first six months. After that, you need to pay to keep it active.

Weighing 5,448 pounds, a GMC Yukon XL is heavier than most vehicles on the road. By virtue of the laws of physics, this makes it safer than smaller, lighter vehicles in a collision. Still, despite an all-new structure, the Yukon XL racks up a 4-star rather than a 5-star overall crash-test rating, and the NHTSA says it earns a mediocre 3-star rollover resistance rating.

GMC’s new Yukon XL Denali is mostly delightful to drive, which is quite a compliment for a full-size, truck-based SUV like this. The 6.2-liter V-8 supplies impressive acceleration and passing power, and returned 16 mpg in combined driving; exactly what the EPA said it would. Credit the Active Fuel Management system, which shuts down half of the engine’s eight cylinders when cruising on the highway. In fact, according to the trip computer, at one point I was getting 25 mpg on the highway.

The Yukon needs a big engine because it’s a big vehicle, and on the multi-lane freeways and surface streets of metropolitan Los Angeles, it sure felt that way. Narrow lanes and narrower parking spaces presented challenge on a regular basis, but the Yukon’s safety technology, precise steering, and remarkably tight turning radius given the 22-inch wheels all helped to make the urban jungle easier to navigate.

You should know, though, that selecting the optional 22-inch aluminum wheels and their P285/45R22 tires has a negative impact on ride quality. Despite the Denali’s Magnetic Ride Control suspension, this SUV didn’t feel particularly connected to anything other than glass-smooth pavement. Sharp bumps, potholes, bridge transition joints, and other surface anomalies produced noticeable, and sometimes significant, impact harshness. I know those wheels look terrific, but there is a price to be paid beyond the extra $895 for the option. Oh, and according to Tire Rack, the cheapest tire in this size costs $194, not including tax, mounting, or balancing.

One benefit of those bigger wheels and tires is extra grip. I found that I could take freeway ramps with more speed than expected. Nevertheless, the Yukon XL Denali is not comfortable with extra-legal velocity, and is much happier loafing along in a lane other than the fast one. Part of the reason is size, but part of the reason is also that this vehicle requires extra room to stop. You’re definitely not going to want to be trying to intimidate other drivers by filling their rearview mirrors full of drilled Denali grillework, because you might end up causing an accident.

There was a time when I thought that something like a GMC Yukon XL Denali would make a perfect family vehicle. I don’t think that way anymore, and not just because this new one offers smaller cargo capacities coupled with an inch less ground clearance than before and a 3-star rollover resistance rating. Still, that doesn’t mean there aren’t good reasons to buy one.

Otherwise, don’t try to justify this purchase with logic. Just tell people you bought this big, hulking SUV because you like the way it looks, and it will crush almost anything that gets in its way.

GMC provided the 2015 Yukon XL Denali for this review 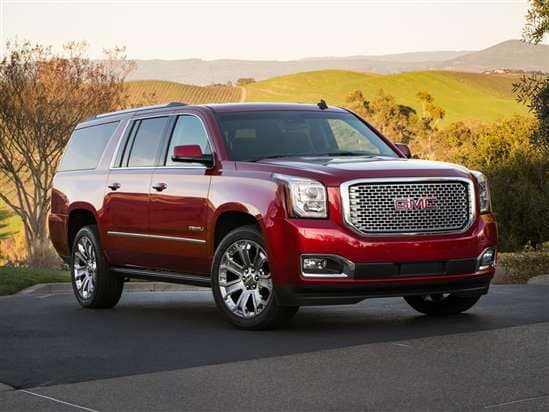