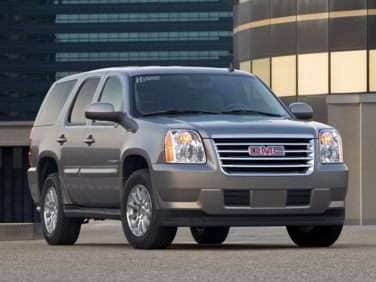 All About GMC Yukon Hybrid

The GMC Yukon Hybrid’s drivetrain is based on a dual displacement 3-liter/6-liter V8 gasoline engine that is paired to two 60 kW continuous electric motors that are housed in the transmission. A continuously variable drive system handles light loads, while a four-speed fixed gear unit takes over heavier driving conditions. The battery is a 300-volt nickel-metal hydride unit. Combined output of the GMC Yukon Hybrid’s drivetrain is 379 horsepower. Thanks to the battery’s size and capacity, the Yukon Hybrid can travel for short distances at up to 25 miles per hour on electric power alone, but the vehicle most commonly uses its two-mode hybrid system to travel on a combination of gasoline and electric power. The battery is charged via the electric motors’ operation from the gasoline engine, or through the vehicle’s regenerative braking system, which recaptures the kinetic energy that would be lost as the vehicle brakes to a stop, and instead feeds that energy back to the battery. To reduce weight, which further helps fuel economy, The GMC Yukon Hybrid earned Environmental Protection Agency ratings of 21 miles per gallon city and 22 miles per gallon highway for the rear-wheel-drive version. Though the Yukon Hybrid boasts fuel economy ratings about 50 percent better than its gasoline sibling, the towing and cargo capacity in the GMC Yukon Hybrid are similar to the ratings for the traditional gasoline version of the Yukon.