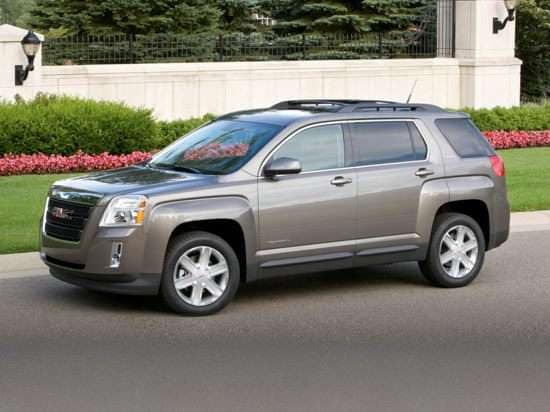 New aluminum wheel designs debut for SLE and SLT models, and the 2014 Terrain is offered in a new Silver Sky Metallic paint color.

A 2.4-liter 4-cylinder engine is standard for the 2014 Terrain, generating 182 horsepower and driving the crossover SUV’s front wheels through a 6-speed automatic transmission. A significantly more powerful 3.6-liter V-6 engine is optional, making 301 horsepower and 100 additional lb.-ft. of torque. An all-wheel drive system is also available for this model.

When equipped with the standard 4-cylinder engine, the 2014 Terrain is rated to get 26 mpg in combined driving with front-wheel drive, and 23 mpg with AWD. Choose the optional V-6 engine, and the Terrain gets 20 mpg with front-drive and 19 mpg with AWD.

According to the National Highway Traffic Safety Administration (NHTSA), the 2014 Terrain receives an overall crash-test score of 4 stars. Note, though, that the SUV scores no lower than 4 stars in any individual assessment.

The Insurance Institute for Highway Safety (IIHS) had not officially rated the 2014 Terrain as this summary was written. Last year, the SUV receives the highest rating of “Good” in all tests that were conducted. The Terrain’s front crash prevention rating was also deemed “Basic.” The IIHS has not conducted its difficult new small overlap frontal impact test on the Terrain as this summary was written.