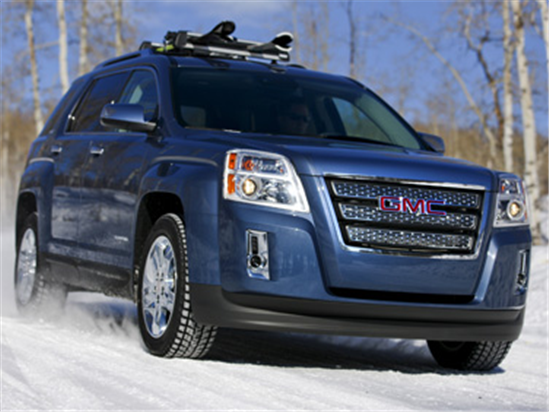 The 2013 GMC Terrain provides owners with a Professional Grade entry into the compact SUV/crossover segment, along with, for the current selling season, its first up-scale Denali edition. But there also are significant changes to the rest of the lineup, starting with a newly available V6 engine that is more powerful—but just as efficient—as the 2012 V6. There are new technologies inside the 2013 GMC Terrain as well, including an InteliLink infotainment system, Color Touch Navigation, a universal home remote, and a Safety Package that bundles some of the industry’s most sought-after driver-assistance measures.

The 2013 GMC Terrain jumps into the fray with a relatively premium slate of standard features, as the entry point to the portfolio, the SLE-1 model, provides owners with a six-speaker Color Touch audio system (with USB port), Bluetooth hands-free-calling technology, ambient lighting, and a rear-vision camera. Complementing that content, the 2013 GMC Terrain SLE-1 wears 17-inch painted aluminum wheels, a Charcoal-and-chrome grille treatment, and body-color bumpers, door handles, and power-adjustable and heated outside mirrors.

With the 2013 GMC Terrain SLT-1, heated front seats make an appearance, as does a remote-start system; another step up, to the SLT-2 trim, brings a power sunroof and liftgate, chrome exterior accents, 18-inch wheels, and GMC’s comprehensive Safety Package (see Tech section for highlights).

Then there’s the 2013 GMC Terrain Denali, representing the acme of the Terrain team and boasting all the creature comforts and technologies of the lower grades, including the safety package. Of course, GMC also further refines the Denali model with seating appointed in perforated leather, side blind-zone alert and rear cross-traffic detection, standard all-wheel drive, and exclusive interior and exterior style cues.

Remember, too, that the entire 2013 GMC Terrain lineup is offered in front- and rear-wheel-drive configurations, with all models getting a complimentary subscription to GM’s OnStar service.

Two direct-injected engines are available in the 2013 GMC Terrain: A high-efficiency 4-cylinder powerplant with 182 hp and 172 lb.-ft. of torque, plus the new V6 that displaces 3.6 liters and makes 301 hp and 272 lb.-ft. of torque. Each engine is then paired with its own six-speed automatic transmission for optimum performance and efficiency.

In testing by the Insurance Institute for Highway Safety (IIHS), the 2013 GMC Terrain earned the designation of Top Safety Pick for acing all four of the institute’s tests for front, rear, side and rollover occupant protection. The 2013 GMC Terrain also earned a 4-star overall safety rating from the National Highway Traffic Safety Administration, backed by a 5-star result for side crash protection and 4-stars in both frontal crash and rollover testing.

The 2013 GMC Terrain also can be kitted out with a full complement of driver-assistance technologies, like forward-collision alert, lane-departure warning, blind-spot and rear cross-traffic detection, and a rearview camera.