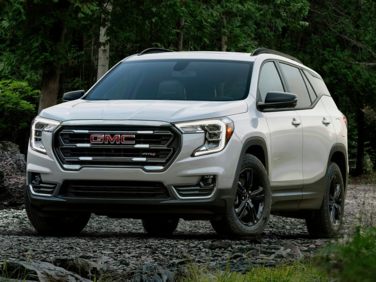 All About GMC Terrain

A member of the GMC family of trucks lineup since 2010, the GMC Terrain is that marque’s entry into the small crossover category. Best known for marketing the up-level General Motors stable of trucks and sport utility vehicles, you’d expect a small crossover wearing the GMC badge to be a pretty nice piece. Given its nice interior, handsome squared off styling, flexible interior configurations, generous array of standard features, and pleasant demeanor on the road, you’d be quite justified in doing so in this case.

First shown at the 2009 New York Auto Show, the Terrain entered GMC’s lineup in 2010. Sharing its basic platform with the Chevrolet Equinox, the Terrain has a unique look, unlike many of GMC’s other products, which have a tendency to look just like their Chevrolet counterparts.

Keep in mind though; while GMC vehicles might look like their Chevrolet cousins, the GMC product is typically considerably more luxurious inside. This is readily evident in the design of the Terrain’s interior. Another thing you’ll note about the Terrain is how quiet it is. GMC’s engineers even went so far as to specify an active noise cancellation system for four-cylinder Terrain models.

Terrain is currently offered in three states of trim, SLE, SLT, and Denali. However, within the SLE and SLT trim packages there are two additional designations; SLE and SLT 1 in addition to SLE and SLT 2. Regardless of your choice of trim, you’ll get a 2.4-liter inline four-cylinder engine as standard equipment. It’s a bit taxed though, so you might want to consider the optional V6 if you like things to move with an air of urgency.

Regardless of your engine choice, you can also get either front- or all-wheel drive; so you don’t have to give up one to get the other. A six speed automatic transmission conducts power from whichever engine you choose to however many powered wheels you elect. Towing capacity is 1500 pounds with the four-cylinder engine and 3,500 pounds with the V6.