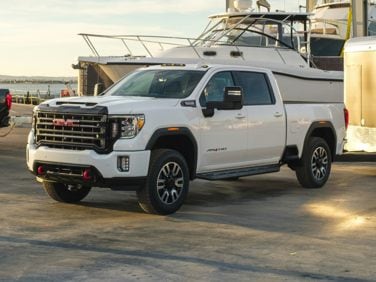 All About GMC Sierra 2500HD

GMC Sierra trucks have been available configured as two-door regular cabs, three-door extended cabs, four-door extended cabs, four-door crew cabs, and duallys. The GMC Sierra heavy duty variants, designed specifically for towing and heavy cargo loads, are available as a 1500HD and a 3500, as well as the 2500HD. For the Sierra 2500HD’s first generation, it could be equipped with a 6-liter Vortec V8 with 300 horsepower, a 6.6-liter Duramax V8 that produced 300 horsepower, a 8.1-liter Vortec 8100 V8 that yielded 340 horsepower, or, later in the generation, a 6.6-liter Duramax V8 with a horsepower increase to 360. The Sierra 2500HD featured a five-speed transmission, though 2006 and 2007 models had a six-speed unit. The tow rating for the 2500HD is 16,300 pounds with a 8.1-liter power plant or 10,600 pounds with a 6-liter. Opting for a four-wheel-drive Sierra could sacrifice the truck’s towing capability somewhat.

The second generation of the GMC Sierra 2500HD was introduced in 2007, with a redesigned interior, exterior, suspension, and frame. The new frame is fully boxed, constructed of high strength steel that improves stiffness by 92 percent. The rear springs were upgraded to larger components, as well as the engine mounts and the transmission mounts. New upper control arms feature forged steel for improved strength and weight reduction, and new lower control arms are constructed of cast iron to improve load capacity. A reinforced steel safety cage improves the cabin’s structure to protect its occupants. As of the second generation, General Motors has discontinued the manual transmission options on all its pickup trucks, including the GMC Sierra. A six-speed automatic gearbox is standard for all heavy duty Sierra models, and an upgraded Allison six-speed automatic unit comes with trucks equipped with the Duramax V8 diesel engine. The Duramax option is a 6.6-liter unit that produces 397 horsepower and can be operated on B20 biodiesel fuel. A gasoline 6-liter V8, with 360 horsepower, is the base engine for the Sierra 2500HD. The 8.1-liter Duramax drivetrain option was discontinued for the second generation of the GMC Sierra.