It's been a year since the 2015 GMC Sierra 1500 was completely redesigned, and in that window of time we've also been gifted with an all-new version of the class-leading Ford F-150. Comparisons are inevitable between these two full-size pickup stalwarts, but what's perhaps most interesting about the unveiling of the Sierra's staunch rival is the revelation of how much parity currently exists amongst pickups. Not only is the highly-touted aluminum-bodied F-150 more peer than upperclassman when compared to the GMC, but an equally-egalitarian eye must also be extended to the Ram 1500, which is resolutely carving out an ever-widening niche amongst truck buyers.

I spent a week behind the wheel of the 2015 GMC Sierra in Prince Edward Island, Canada's smallest province, in an effort to re-acquaint myself with the continually-improving pickup (which I had not driven since its initial launch). I came away more convinced than ever of just how difficult a choice customers are facing when selecting which truck they'll likely be married to for the next 10 years.

The GMC Sierra 1500 hasn't been treading water since its full makeover in 2014. For the current model year there's a renewed focus on improving the pickup's slate of high tech features, particularly connectivity. All versions of the truck save the base model now come with standard 4G LTE Wi-Fi, which provides a wireless Internet hotspot within a reasonable radius of the Sierra's cabin.

You'll need to be within range of a cell tower to make use of the feature - unlike the truck's IntelliLink infotainment system's Sirius radio, there's no satellite link - but even in the more rural parts of PEI, a province whose largest city could be described as sparsely-populated, I experienced minimal signal dropouts. The system was also very easy to configure and connect to, using a simple password setup that will be familiar to anyone who has ever linked their phone or tablet to Wi-Fi before.

2. Safety Is Very Much A Priority For GMC

2. Safety Is Very Much A Priority For GMC

Complementing the 2015 GMC Sierra 1500's connectivity technology is a strong investment in active safety. The truck's Driver Alert package combines the most impressive elements of GMC's safety effort, offering equipment such as a lane departure warning system, a forward collision warning system, and parking assistance front and rear (useful to have when maneuvering such a large vehicle in an urban environment).

Each of these features is linked to the General's unique Safety Alert Seat, a system that vibrates the perimeter of the driver's bucket to let you know where a potential threat of hazard might be approaching from. This is an extremely useful method for communicating impending danger, as it cuts through the cacophony of beeps, buzzes, and chimes that typically announce modern active safety equipment. That this innovation is available not just in a Cadillac but also a pickup truck is a testament to GM's willingness to spread its technological developments far and wide throughout its portfolio.

3. Engines Hold Their Own, But Transmission Isn't As Polished

3. Engines Hold Their Own, But Transmission Isn't As Polished

The 5.3-liter motor is a good one, and it's easy to see why it's remained popular amongst pickup shoppers tempted with all manner of boosted options from rival brands. Unfortunately, the eight-cylinder's plucky acceleration off the line and highway passing power was occasionally marred by a hesitation and stutter in its six-speed automatic transmission, a frustrating characteristic for such an otherwise-solid drivetrain. When the 6.2-liter V-8 arrives on the Sierra scene later in 2015 it will bring with it an eight-speed automatic that displays a much more refined character (as I've experienced it in other full-size GMs), one that hopefully gets ported to the 5.3-liter and 4.3-liter engines in short order.

The 2015 GMC Sierra 1500 is offered in three body styles: regular, extended and crew. The latter two feature an extra set of doors to make it easier to access their larger passenger compartments, and I'm happy to report that unlike the Ford F-150, GMC provides forward-hinged entry points across the board, which prevents you from being trapped between two doors when trying to unload your kids in a tightly-packed parking lot.

The crew cab is also notable for its roominess, whether you've elected to haul passengers or cargo within its spacious confines. The pickup I drove featured a three-across split bench up front that could be easily divided by lowering the truck's respectably-proportioned center console. The GMC Sierra 1500's back bench is also configured to haul a trio of riders, but should you decide that you'd rather stuff the truck with boxes instead of people, you can do that easily enough by flipping up the 60/40 split accommodations to reveal a flat load floor.

5. The Rest Of The Industry Has Caught Up To The Denali

5. The Rest Of The Industry Has Caught Up To The Denali

There was once a time when the GMC Sierra Denali stood out from the pickup landscape by way of its unusually-upscale feature set and unique styling within and without. Nowadays it's possible to buy not one, not two, but at least three luxury-laden models from Ford and Ram, respectively, making the Denali's single-tier status somewhat of a novelty on the domestic pickup scene.

I don't want to paint too dark a picture here: the Sierra Denali is still very comfortable ride, and it does come with a class-exclusive magnetic ride control system that provides impressive levels of handling while smoothing out rough roads. However, having the SLT model just below it (the version of the truck that I piloted in PEI) represents a more dramatic drop-off in content as compared to the move from F-150 Platinum to one of its slightly-lesser premium trims.

Although full-size pickups have evolved from their utility-focused roots and been fully embraced as daily drivers by a large portion of the population, they are still ultimately judged by their ability to turn in an honest day's work. Quantifiably, this is represented by towing and hauling figures - numbers that aren't quite standardized across all manufacturers yet, but which serve as a kind of statistical shorthand to tell you where a particular model stands in relation to its peers.

The 2015 GMC Sierra 1500 might not engage in the same level of payload-increasing voodoo that currently afflicts a number of its rivals, but its trailer-towing numbers are impressive nonetheless. V-6 models are capable of hitching up to 7,200 pound loads, while the 5.3-liter V-8 raises the upper boundary to 11,200 lbs. I've had the chance to drag 7,000 lbs or so with the eight-cylinder Sierra 1500 in the past, and came away pleased by how easily it handled its long, ponderous load. Once the 6.2-liter behemoth appears on the scene the Sierra will boast 12,000 lbs of total trailering capacity.

You also get the customary choice of bed lengths with the GMC. Regular cabs can feature either an eight-foot cargo area or one that's shortened to 6.5 feet, while crew cab buyers must choose between 6.5-foot or 5.5-foot options. The Sierra 1500 extended cab is exclusively offered with a 6.5-foot bed.

Ford has its EcoBoost V-6s. Ram has its EcoDiesel. GMC (and corporate sibling Chevrolet) have elected to go with cylinder deactivation technology along with direct fuel injection to maximize their miles per gallon. It's an interesting approach, one that's largely transparent to drivers and which doesn't require selling potential buyers on the advantages of turbochargers or trying to assuage fears about future diesel fuel prices.

It's a strategy that has paid dividends for the 2015 GMC Sierra 1500, too. Splitting hairs is a time-honored tradition in the full-size pickup marketing wars, so you won't be too surprised to hear the brand claim it offers the 'most fuel efficient V-8 pickup,' with the 5.3-liter's 16-mpg city and 23-mpg highway beating out the F-150's 5.0-liter and the Ram 1500's 5.7-liter eight-cylinder options. Numbers are slightly lower with four-wheel drive installed, but only just - it works out to one fewer mile per gallon when looking at the combined figure, a rating I can confirm as accurate after pouring two tanks of fuel through the Sierra's V-8 in a single week of driving.

Six-cylinder editions of the Sierra 1500 are only slightly more efficient than their more gifted 5.3-liter sibling, showing 18-mpg in stop and go driving and 24-mpg on the highway. The upcoming 6.2-liter motor checks in somewhat worse with an advertised 15-mpg around town and 21-mpg during highway cruising, but it's clear that the eight-speed autobox that's standard with this engine is working wonders to keep its fuel economy out of the gutter. Imagine how much more frugal the rest of GMC's engine options would be with this advanced transmission behind them.

8. A Sierra For Every Budget - But Not Your Cheapest Option

8. A Sierra For Every Budget - But Not Your Cheapest Option

The 2015 GMC Sierra 1500 starts at an MSRP of $26,670 when ordering the base regular cab with a short box and two-wheel drive. At the other end of the spectrum is the $49,655 Sierra 1500 Denali. These two book-ends keep the GMC slightly more expensive than its Silverado clone and Ford F-150 rival, while boosting it about $1,000 over the barebones Ram 1500 Tradesman. Outliers like the pricier Nissan Titan and the Toyota Tundra don't factor in at the entry-level as they are only available as four-door models.

Looking at the top end, the Denali manages to undercut the F-150 Platinum and the Ram 1500 Limited by a thousand or so dollars. However, as I mentioned earlier you have to keep in mind that Ford and Ram also offer a range of luxury trucks to GMC's single option. Toyota's swanky Tundra 1794 Edition is almost $5k less than the Denali. 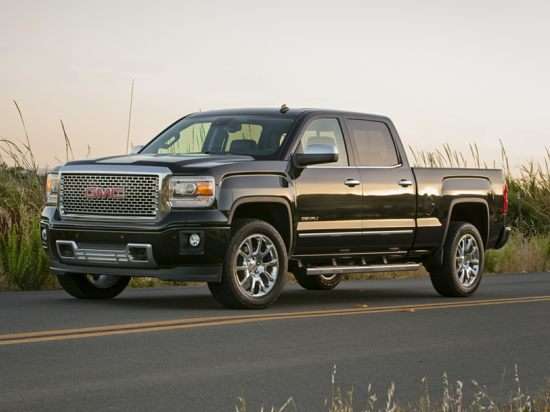