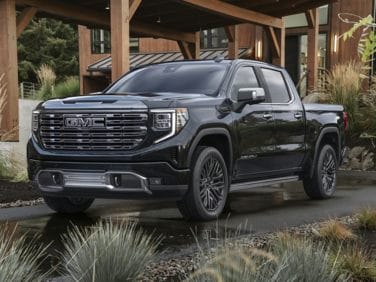 The GMC Sierra 1500 is a full size truck that's made in America. Aggressive lines, powerful engines and decadent luxury. Meet the GMC Sierra. In a valiant effort to retake it's share of the full size pickup market, GM has thrown everything it has into the GMC Sierra. From a blood-thirsty 6.2-liter V8 with 403-hp, to a heated steering wheel and touch-screen navigation, the new Sierra shows that GM has pulled out all the stops. With tantalizing new trucks from Toyota and Ford, it's evident that the GMC Sierra can hold its own amid such stiff competition. Tow ratings have jumped to 10,500-lbs thanks to a stiffer frame and the available 6.0-liter engine. And build quality has improved to. You'll notice this as soon as you get in. No more creaks and squeaks from the old milk-jug plastic interior.

There's a standard cab, aimed at fleet buyers. An extended cab with rear doors that not only swing open 170-degrees, but they have windows that actually roll down. What a brilliant idea. Crew cab trucks feature 4 full size doors and can be had with a rear DVD player and separate audio controls with headphone jacks. When the kids are at school, you can fold the rear seat out of the way to reveal a flat floor. Handy for loading cumbersome objects that you don't want to leave in the bed.

Trim levels are the familiar SLE which comes with power everything, a CD player, cloth seats, a rear-window defroster, leather wrapped steering wheel and integrated fog lights. One rung up is the SLE2 which adds better quality cloth upholstery, dual-zone A/C, a center console, six-way power driver and front passenger seats, audio controls on the steering wheel, and special machined aluminum wheels. That's a lot of stuff for a truck. The more up-market Sierra SLT adds leather, a specially trimmed instrument panel, and a Bose sound system with speakers that were designed just for the Sierra's cab. You also get a six-disc CD changer, heated windshield washers, and heated 12-way power front bucket seats. SLT crew cab's get the rear-seat audio system.

The top-of-the line Denali gets the same opulent interior used in the Yukon Denali. It features a fake-wood trimmed, steering wheel with audio controls, heated 12-way leather front buckets with power lumbar adjustment, a fake-wood lined center console, side curtain airbags, dual-zone climate control, park assist and the 403-hp 6.2-liter V8 with a 6-speed automatic. Denali's get a choice of either 19 or 20-inch chromed wheels and a sport suspension. The angry exhaust note let you know that this truck is meant more for sport than work. But it'll do 0-60 in a very sporting 6.5 seconds. However, the "sport" suspension and huge wheels make for a very rough ride. Plus, with this setup, the Denali can only tow 8,800-lbs. The Denali's option list is short, but it includes such niceties as a heated steering wheel, power sunroof, touch-screen navigation and the rear-seat DVD player. This luxo-truck is only available as a crew cab, with either rear or all-wheel drive.

There's also an All Terrain model available which is mechanically identical to the Silverado Z71. Among other goodies, it has 18-inch wheels, Rancho shocks, and a few unique trim pieces. SLT trimmed All Terrain trucks get an exclusive two-tone leather interior.

Sierra engine choices range from a 4.3L V6, with 195-hp, to a 6.0L V8 with 367-hp. There's also a light-duty 4.8L V8 and several variations of the 5.3L, chief of which can run on E85 Ethanol. All three V8's feature GM's Active Fuel Management system, and achieve better than average fuel economy. These engines are backed by GM's 4-speed automatic. No manual transmissions are available.

It's nice to see that GMC is adapting to the times. Better fuel economy and car-like luxuries are sure to help the Sierra win over buyers, by the...truckload.