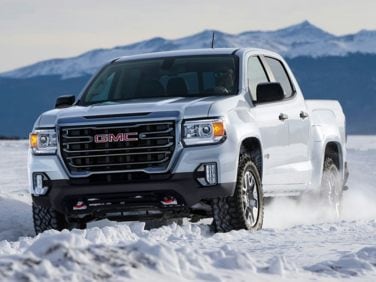 All About GMC Canyon

The GMC Canyon is a two-door, three-passenger small pickup truck, and a four-door, five-passenger extended cab or crew cab small pickup truck. When General Motors decided to revamp their small pickup truck line in 2004, the direction they chose to go in was very similar to that taken by Dodge with their popular Dakota trucks. The new GMC Canyon, which replaced the GMC Sonoma, had a larger appearance as well as a look which made it resemble a slightly scaled down version of its full-size cousin. The Canyon was a significant update over the vehicle that it replaced, and over the last 5 years it has steadily grown in terms of power and utility - eventually catching up to, and comparing favorably with, the Toyota Tacoma and Ford Ranger, two of the best selling vehicles in this market segment.

For 2008, the GMC Canyon is largely a carryover from the 2007 model. Buyers can decide between a 4-cylinder engine which generates 185 horsepower and 190 lb-ft of torque, or they can upgrade to a 3.7 liter 5-cylinder engine which boasts a healthy 242 horsepower and 242 lb-ft. In addition to these engine options are the choice of either a 5-speed manual transmission or a 4-speed automatic. At the very lowest end of the Canyon line are the W/T models, which are designed for maximum utility. Vinyl seats and rubber-coated floors make for easy cleaning, and options are extremely limited, although air conditioning and power steering are standard across every trim level of the Canyon. Drivers can choose to incrementally upgrade their pickup through a staggered series of trims which can add as much or as little luxury as may be desired. As with their full-size trucks, buyers can also outfit the Canyon with a Z71 suspension package for increased off-road capability, or the ZQ8 package for greater control and performance on the road.

The Canyon also offers a range of passenger capacities, depending on the configuration of the vehicle’s cab. The regular cab, which seats 3 across in a pinch, has a shorter wheelbase than either the extended cab or crew cab options, which add either half doors or full-size doors and 3 additional passengers. The crew cab also comes with a cargo bed which is one foot shorter than either of the other configurations, coming in at just over 5 feet in length.

The GMC Canyon is primarily marketed as a slightly upscale alternative to the identical under the skin Chevrolet Colorado. The GMC does have a more handsome appearance than the Chevrolet, but that is largely a matter of personal taste. Both vehicles are capable when it comes to hauling oversized cargo and handling rougher road or field conditions. The smaller engine size and lower vehicle weight makes the Canyon a more reasonable alternative when it comes to daily driving than a full-size pickup. The lower levels of power and smaller size translate into a lower towing capacity, but these same characteristics also make it a more capable trail vehicle than any full-size pickup truck on the market. This is especially true when it comes to off-road conditions such as soft terrain or tight-squeeze mountain passes. The Canyon is an excellent choice for those who need the utility of a pickup truck without the fuel bill that typically comes with the full-sized option.

The 2009 GMC Canyon is a carryover from 2008, with the addition of a new 8-cylinder engine. The 2009 Canyon can be ordered in Regular, Extended or Crew Cab configurations, as well as Work Truck, 3VL, SLE-1 3SA, SLE-2 3SB, SLE-3 3SC and SLT 4SA trims. Trim availability is restricted depending upon which passenger compartment configuration is ordered.

The Work Truck, 3VL and SLE-1 3SA trims both come with a 2.9 liter, 4-cylinder engine that produces 185 horsepower and 190 lb-ft of torque. A 5-speed manual transmission is standard equipment, while a 4-speed automatic can be ordered as an option. Fuel economy is rated at 18 miles per gallon in the city and 24 miles per gallon on the highway for two-wheel drive, Regular Cab editions. Work Truck and SLE-1 3SA trim choosers can replace the 4-cylinder engine with a 3.7 liter 5-cylinder unit that provides 242 horsepower and 242 lb-ft of torque. A 4-speed automatic transmission is the only gearbox option, and fuel economy comes in at 1 mile per gallon below the smaller motor both city and highway. This engine is standard on the SLE-2 3SB, SLT 4SA trucks.

The SLE-3 3SC trim comes exclusively with a 5.3 liter V8 engine matched with a 4-speed automatic. New for 2009, this power plant produces 300 horses and 320 lb-ft of torque, and turns in fuel economy numbers of 15 miles per gallon in stop and go driving and 21 miles per gallon on the highway. It is also available as an option across every trim level except for Work Truck and 3VL. Four-wheel drive can be ordered as an option for each trim except for 3VL.