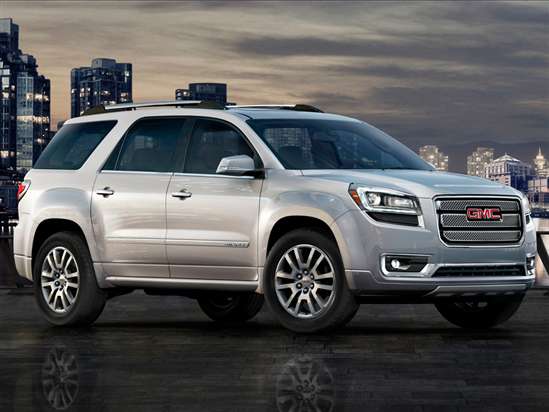 For 2015, GMC installs a standard heated steering wheel in the SLT-2 and Denali models, offers a new 20-inch aluminum wheel option, and will paint the SUV in one of three new colors.

Every 2015 GMC Acadia is equipped with a 3.6-liter V-6, one making 281 horsepower in SLE and SLT models, and 288 horsepower in the Denali version. A 6-speed automatic transmission delivers the power to the front wheels, and all-wheel drive is an option. GMC includes free scheduled maintenance for the first two years or 24,000 miles of ownership, too.

No matter which Acadia model you choose, it is rated to get 19 mpg in combined driving by the EPA.

The GMC Acadia is a safe crossover SUV. In NHTSA testing, it receives 5-star ratings in each crash-test combined with a 4-star rollover resistance rating. The Insurance Institute for Highway Safety (IIHS) says it gets a “Good” rating in all evaluations performed to date. The IIHS has not assessed the Acadia for its ability to protect occupants in the small overlap frontal-impact test.

The 2015 Acadia is equipped with a standard reversing camera, rear parking assist sensors, and OnStar with Automatic Crash Response service. A touchscreen radio is standard, too, and can be upgraded with IntelliLink technology, which is included for all but the base SLE-1 model. A navigation system is also offered for the Acadia.