The GMC Acadia enters the 2012 model year with nothing really substantial in terms of updates. There are two new exterior color choices (Crystal Red Tintcoat and Stone Grey Metallic), a new power outlet in the center console, and the addition of hill-hold braking technology as a standard feature. That said, it's still a fairly fresh offering that occupies a unique niche spot in the automotive landscape. It's a premium three-row crossover with a full-suite of luxurious amenities, and it's priced to sit below the more serious luxury space occupied by the likes of the Audi Q7, Cadillac Escalade, and Mercedes-Benz GL.

On the outside, the 2012 GMC Acadia boasts a sharp look that treads the line between handsome crossover and buffed-up sport utility vehicle. Sure, some designer went a bit nuts with the plastichrome, but that is an easily remedied sore spot on the outside of an otherwise sharp machine. Inside it's more of the same in terms of strong swings and minor misses. Typically, the buttons that General Motors uses around it's infotainment section are of the variety favored by people who are one optometrist vist away from being declared legally blind. On the Acadia it's the opposite, as this GMC uses buttons that are almost comically small.

What's not small though is the available interior space. The 2012 GMC Acadia is proof that an automaker understands what it takes to produce a competent three-row vehicle with enough comfort in each row. Also not small is the 288 horsepower produced by the 3.6-liter V6 engine, which is also rated to churn out 270 pound-feet of torque. Paired with a six-speed automatic gearbox, the power can be sent to either the front wheels or all four, depending on which version you opt for. 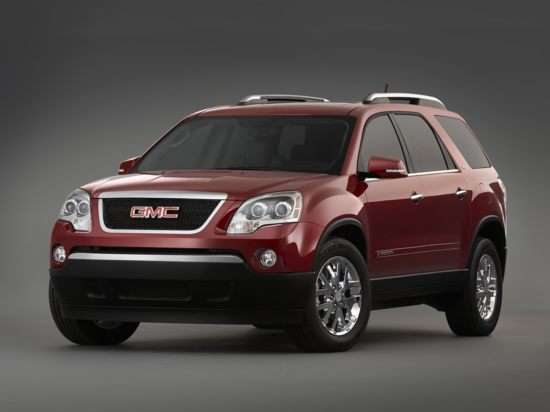