The latest likable Lambda, this time from the professional truck division

OK, that last one may not be an actual GM platform, but the others are real, and right now a lot is riding on those three Lambdas. They take form as GM’s family of new large crossover utility vehicles: the Saturn OUTLOOK, the Buick Enclave and today’s topic of discussion, the GMC Acadia. Not based on any GM car, the new Lambda platform shares more with cars than with trucks, such as a front-wheel drive orientation, suspension designs and driving feel that all share more with cars than GM’s big body-on-frame trucks.

A few years ago, GM promised a renewed emphasis on quality and technology. It’s a claim that has been made before, but with each new vehicle that comes out, it becomes clear that GM wasn’t blowing smoke. Case in point: Our GMC Acadia SLT-1 test car. During our week with the Acadia, we became impressed with its combination of style, versatility, clever touches and a sense of being very well thought through. There’s very little half baked here, just a quality vehicle at a competitive price from General Motors.

For those domestic doubters out there, go ahead and let that sink in for a moment. 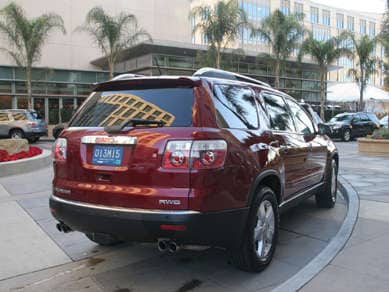 What We Drove
All Acadias come with a 3.6-liter V-6 engine with variable valve timing that’s good for 275 horsepower. It’s connected to a six-speed automatic transmission with manual shift control. Our mid-level SLT-1 test car included quite a bit of equipment for its $33,960 base price, which included the $735 destination charge. Among the major upgrades over the standard SLE version is leather on the seats, steering wheel and shift knob, power sliding and heated front seats, captain’s chairs in the second row with GM’s new Smart Slide system, and a darn fine Bose audio system.

Optional on our test vehicle were the $1,300 dual Skyscape sunroof, $395 premium paint (a sharp looking burgundy that was probably worth the cost), a $350 power liftgate, a head-up display for $350, XM satellite radio for $199, $150 worth of cargo area audio controls and a $175 115v power outlet nestled in the rear of the center console. All told, our Acadia drove out the door with a price of $36,879, which is right in line with its primary large crossover competitors, such as the Honda Pilot and Toyota Highlander.

Performance
A 3.6-liter V-6 putting out 275 horsepower should be enough to make the Acadia feel almost spry. The engine is certainly willing, with smooth power delivery and even a good growl as the revs rise; this is GM’s new corporate V-6, and we couldn’t be happier. However, the Acadia weighs in at 4,720 lb. in front-drive form, and as a result acceleration is merely adequate. We’re willing to forgive, and it’s not like the Acadia is blocking traffic or anything. We’re just power mad and like as much as we can get. Just keep in mind that the Acadia is meant for hauling families and their gear, not haulin’ butt. We were more disappointed by the drivetrain’s paltry 15.5 mpg during its time with us. That’s better than the full-size Chevrolet Tahoe we tested a few weeks prior (13.2 mpg), but not by a very wide margin, and far off the EPA’s 18 mpg city rating.

The transmission is mostly a willing partner. Its six speeds usually swap quickly, although we did notice some upshift jerkiness at full throttle and the occasional downshift hesitation. Manual control of the transmission is available through a rocker switch on the shift handle. It works well enough, and given the Acadia’s role as a new-age station wagon, paddle shifters would probably seem out of place, even though some on our staff prefer them.

Handling
You wouldn’t expect a minivan to carve corners with surgical precision, so don’t expect it from this minivan replacement. The ride is comfortable and secure, with minimal dive and squat under braking and acceleration, respectively. It’ll race down the freeway beautifully, absorbing expansion joints and isolating its occupants without a problem. If the road bends, the steering is numb and the Acadia’s size makes it a little hard to maneuver, but it’s weighted well and the leather wheel feels good in the hands. At cruising speeds on twisty roads the Acadia is fine. Ask it to hurry up, and you’re punished with body roll, yowling tires and a stability system that all but glares at you as it works to keep the Acadia’s mass on the road. There are very few seven-passenger crossovers that have good handling, and the Acadia doesn’t alter that equation in any way. 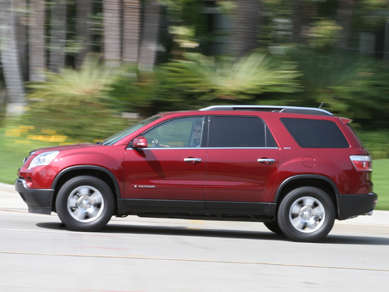 Fun to Drive
There’s not a lot of gee-whiz enthusiast fun in this vehicle. It’s not particularly quick, doesn’t handle very well, and still makes you wince a little when you gas it up. On the other hand, fun isn’t part of this vehicle’s mission. During our time with the Acadia, one of the editors was able to load up his three kids – with child booster seats – and all the gear needed for going out with three preschool-age children. As a conduit to fun times, the Acadia has got you covered. 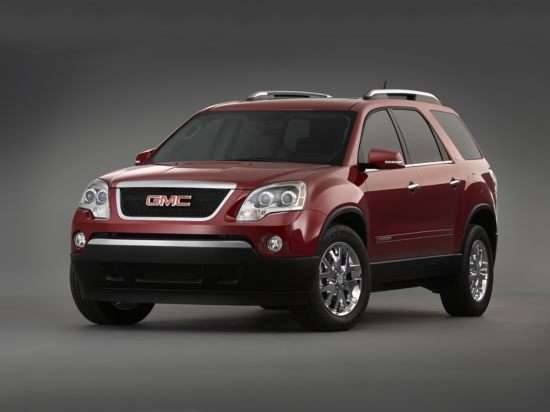 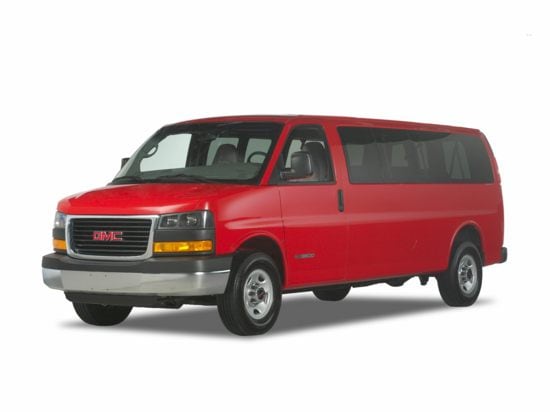