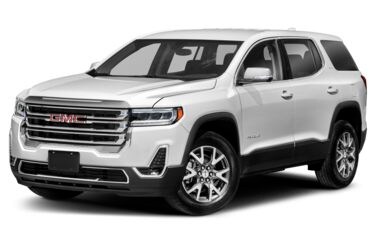 All About GMC Acadia

The GMC Acadia is a four-door, five passenger sport-utility vehicle. The GMC Acadia is one of several full-size cross-over SUV's from General Motors. Built on a new front-drive platform, shared with the Buick Enclave and Saturn Outlook, the Acadia offers a car-like drive with all the capabilities of a large SUV. Seating for eight and cavernous cargo room are just some of this new Ute's features. But it's the combination of car-like fuel economy and big SUV room, that allows Acadia buyers to have their cake and eat it too.

Clean, bold lines and an aggressive stance give the Acadia a rather sporty look. But on the inside, it's not business as usual. Long known for cheap looking interiors and poor build quality, the competition forced GM to clean up its act if it wanted to compete. And that's just what they've done.

Better quality materials and a clean design give the Acadia's interior a European feel. While features like triple door seals, a huge sunroof and SmartSlide third-row access almost make you forget that you're in an American car.

The Acadia is available as either front, or all-wheel drive and is powered by a new aluminum 3.6-liter V6 which pumps out an impressive 275 horsepower. Not bad for such a small powerplant, but it still feels a bit weak in a vehicle of this size..And it's here that you really start to notice that the Acadia is more of a minivan than a truck.

With a towing capacity of just 4,500lbs, and no low-range four-wheel drive, the Acadia seems best suited to the concrete jungle than the real one.

With that aside, the Acadia makes perfect sense as a people mover and stuff hauler. And you can haul a lot of stuff too, thanks to a generous 119 cubic-feet of cargo room. There's even a plastic lined bin under the rear floor for small items, and the third row seats folds out of the way with much less effort than you'd expect.

Another notable feature of the Acadia is what GM calls SmartSlide. Instead of the undignified crawl and squirm technique usually needed to get into the third row seat, you can now just flip a lever on the back of the second row seat and it slides up and out of the way.

Options available for the Acadia include a cool dual-panel Skyscape sunroof which allows the rear passengers to get some sun too. There's also a DVD-video system for backseat viewers, 19-inch wheels, DVD-based navigation with touch-screen control and backup camera, and a second-row bench instead of the captains chairs, which increases seating capacity to eight.

There's also a nifty convenience package which includes a remote starter, ultrasonic rear parking assist, a head-up display of important instruments like the speedometer, audio controls in the back cargo area and a power liftgate. All these options are packaged as either SLT-1 or SLT-2 trim designations.***** So, the Acadia gets good gas mileage, has huge amounts of room, and feels well put together. When's the last time you could say that about an American car?

The 2009 GMC Acadia is largely a carryover from 2008, with the addition of a brand new engine. The 2009 Acadia is available in SLE, SLT1 and SLT2 trims. Each of these is powered by the same new for 2009 3.6 liter V6 engine that produces 288 horsepower and 270 lb-ft of torque. A 6-speed automatic transmission helps the crossover to turn in fuel economy of 17 miles per gallon in town and 24 miles per gallon on the highway. All-wheel drive is an option on each trim.