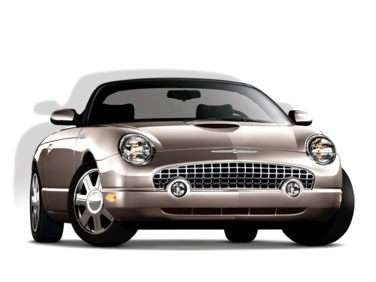 All About Ford Thunderbird

Ford’s Thunderbird had a fifty year reign from 1955 through until 2005. The vehicle is a classic offered referred to as the T-bird. The original vehicle was a two-seat coupe. For all it’s sporty handling and looks, the car was never marketed as a sports car. It was actually categorized as a personal luxury car. This vehicle actually created the category. The Thunderbird gained in size over the many generations up until 1977 at which point Ford started decreasing the vehicle's size. The vehicle performed well for the first thirty odd years. Then larger coupes fell in popularity and sales dropped, forcing Ford to end production in 1997. The Thunderbird was revived again from 2002 through 2005 as the 14th generation of the vehicle.

This new model, again a two-seater, was well received, winning several awards in the first year of production. It was released at the height of the ‘retro’ phase the market went through that included vehicles like the Chevrolet SSR and the Chrysler Prowler. The vehicle was similar to the original Thunderbird, managing to retain the same flavor but with a new look. This vehicle is built on the same platform of the Lincoln LS. This model had a 3.9 L V8 engine that came with a five-speed automatic transmission. The power was boosted in 2003 bringing it up to 280.

The vehicle was released to a lot of fanfare and Ford expected to garner decent sales that never came about. Given the age of technology at the time, it’s no surprise that the first two hundred vehicles were sold in an amazing 42 minutes online through Neiman Marcus. This special group of vehilces were an all black exterior (expect those with hardtops that were painted silver) with matching interiors. Just over 19,000 vehicles were sold in the first year. However, after this initial excitement, the sales dropped. Part of the reason for the poor showing was the price, which came in around $40,000, and the lack of power and handling when compared with the competition. Another reason was put on poor marketing and promotion. Whatever the reason, the vehicle only ran for three years.

There were some changes made over the years. In 2002 the vehicle came in a selection of bright vivid colors like Inspiration yellow, and Thunderbird blue. Each of these were matched with two tone interiors with black being one of the tones and the exterior color being the other. Other colors and combinations were available and contributed to the ‘look’ of the new Thunderbird. Then the next year, everything switched and the two tone color schemes were tossed in favor of a single color like black, and desert blue sky or coral. All colors that came after this point remained much softer than the original color statement.

For all the changes, nothing changed the declining sales.

The safety features included on the Thunderbird were second-generation front and side air bags for driver and passenger, anti-lock brakes, all-speed traction control, keyless entry and a SecuriLock security system.