The 2016 Ford Taurus—and the fullsize sedan segment overall—saw a double-digit spike in demand for the first quarter of the year, as customers seem to be rediscovering what used to be one of the most popular vehicle categories in the industry. With that in mind, Autobytel experts are here to help reintroduce you to the Blue Oval’s biggest sedan, which is likely in its last model year in its current configurations. An all-new, China-only Taurus debuted in 2015 in Shanghai, and that version is expected to go on sale in this country for the 2017 model year, after it’s been reengineered and revised to meet the needs of US drivers.

The current Taurus continues to be a strong choice as well, thanks to ongoing attention from the Ford team. The vehicle was significantly refreshed for the 2013 model year and has received important content additions since then, too, including the launch of the brand’s latest SYNC 3 in-car connectivity and infotainment system specifically for this year.

The 2016 Ford Taurus has an MSRP that starts at $27,110, making it a particularly practical choice in the segment. Its Chevy rival, the Impala, is all of $15 less expensive, but all other competitors cost at least $850 more; in fact, the Toyota Avalon, Nissan Maxima, Kia Cadenza, Chrysler 300 and Hyundai Azera have sticker prices north of $32K.

It’s also worth pointing out that the Taurus SE that wears that price tag is fairly well equipped, complete with power amenities, a 6-way power-adjustable driver’s seat, a basic SYNC with MyFord setup and, newly standard for 2016, a rearview camera system.

Next, Ford provides a pair of more premium-oriented models, the SEL and Limited, featuring MSRPs of $29,540 and $34,460. The former still seriously undercuts the pricing of most Taurus rivals, yet it adds luxury cues such as a leather-wrapped steering wheel and dual-zone automatic temperature control. The Limited then ups the ante with a leather interior that’s highlighted by real wood accents and front seats that are both heated and ventilated for comfort. Nissan and Toyota, among others, can’t match the same conveniences at the same price point. Also missing from much of the Ford competition: a dedicated high-performance model, like the Taurus SHO edition that’s priced from $40,275.

Ford brings its EcoBoost technology—which unites twin turbochargers and direct injection—to the Taurus with 2 different engines. For folks who put a priority on fuel economy, there’s a 2.0-liter, 4-cylinder unit that returns EPA ratings of 20 mpg city/29 mpg highway/23 mpg combined, but it still delivers a peppy 240 horsepower and 270 lb.-ft. of torque. The traditional 4-cylinder engine for the Chevy Impala is limited to 196 horsepower and 186 lb.-ft. of torque.

At the other end of the spectrum is the 3.5-liter EcoBoost V6 that motivates the Taurus SHO. With that engine, enthusiasts can count on 365 horsepower and 350 lb.-ft. of torque. The so-called Nissan Maxima “4-Door Sports Car” has 65 fewer horses and 89 fewer lb.-ft. of torque than the go-fast Ford, and that output is complemented by a sport-tuned suspension and all-wheel drive. The Maxima makes do with a front-drive only configuration.

But even the standard powerplant for the 2016 Ford Taurus has its competitive benefits. For instance, the 3.5-liter V6 is backed by 288 horsepower and 254 lb.-ft. of torque to serve up more power than a Toyota Avalon.

Infotainment, Audio and Other Features

Infotainment, Audio and Other Features

The 2016 Ford Taurus welcomes the next generation SYNC 3, and so should customers. After all, functionality has been greatly improved, starting with a new capacitive touchscreen that recognizes typical “pinch” and “swipe” commands, like those on your smartphone, while the system further adds more sophisticated and accurate voice-recognition technology. SYNC performance also has been enhanced to be faster than ever, and the system now can automatically update itself anytime it’s in range of a Wi-Fi connection. Another notable SYNC bonus is the system’s no-subscription 911 service. This technology can automatically connect you with a trained operator in case of an accident, as well as relay details about your location, and it can do so even if no one in the vehicle can reach the controls.

Naturally, navigation and satellite radio also are available, as is an upcoming upgrade that allows the Taurus to support smartphone integration with Apple CarPlay and Android Auto.

Ford additionally leverages an ongoing partnership with Sony for premium audio, so that Taurus occupants can tune in their favorite music, talk and news, listening through a 12-speaker, surround-sound setup that features iTunes tagging.

On the other hand, Ford engineers realize that, in some situations, the ability to rock out while on the road may be a bit distracting for younger, more inexperienced drivers. That’s where the standard Ford MyKey technology comes into play, since it can limit audio volume, and maximum speed, and enable in-car alerts to warn of unbuckled seatbelts and low-fuel conditions.

With its relatively “short” side windows and “tall,” smooth doors, the 2016 Ford Taurus has a distinctive, planted presence that’s further accentuated by its fullsize dimensions. Indeed, the Taurus is longer than all of its competitors listed here, though the differences are especially noticeable compared to the Nissan Maxima and Toyota Avalon. The Taurus, at 202.9 inches, is more than 10 inches longer than the Nissan and stretches nearly 8 inches beyond the Toyota. That Ford’s extra length also means extra cargo room in the trunk, where the Taurus once again leads the way with a capacity of 20.1 cubic feet.

Designers did deliver some sporty details for the SHO, but with an eye on subtle changes such as a rear spoiler, a black mesh grille and chrome-tipped dual exhausts. That said, the available 20-inch wheels for the tuned-up Taurus, showing a sort of 10-spoke/5-petal cloverleaf appearance, definitely grab your attention. The Taurus SHO fulfills its role as the range-topper of the lineup with high-intensity discharge (HID) headlamps, and all Taurus trims do supply LED taillamps as standard equipment.

Finishing off the expressive look of the car are 4 new exterior finishes for 2016: Shadow Black (non-SHO cars only), Absolute Black (a SHO exclusive), Blue Jeans, and Guard.

The cabin of the 2016 Ford Taurus is distinguished by a highly symmetric design up front, with both the instrument panel and the area ahead of the front-row passenger capped off by “hoods,” and the center console and stack flanked on each side by a similar arrangement of trims and climate vents.

Ford also spent much time on Taurus seating. For example, the available multi-contour seating with “Active Motion” technology was developed to offer new levels of comfort for the driver and front-row passenger. The secret here is a system that continuously adjusts the seats' lumbar air chambers, built into their backs and bottom cushion, in a pattern proven to reduce fatigue. The Taurus tops the 300 and Charger, and the Toyota Avalon, in maximum front legroom, too, so those occupants can enjoy uncramped accommodations. To increase comfort, the Taurus can be ordered with heated and ventilated front seats, along with heated outboard rear seats. A warming function for the rear row is absent from competitors like the Chevrolet Impala, Chrysler 300 and Dodge Charger.

Moreover, the Taurus SHO is configured with a driver-friendly environment of its own, sporting exclusive front seats, aluminum pedals, a woven aluminum applique, a leather-wrapped steering wheel and embroidered floor mats.

The 2016 Ford Taurus has earned a 5-Star Overall Safety Score from NHTSA, including 5-star performances for both frontal- and side-crash scenarios and a 4-star mark in testing for rollover roof strength. And while you might think big family-oriented cars like the Taurus all provide the same safety grades, they don’t: The Chrysler 300 received a 4-Star Overall Safety Score, and neither the Hyundai Azera nor the Kia Cadenza have been tested by NHTSA.

NHTSA also noted that the Taurus provided 3 of its “Recommended Technologies”: a rearview video system, forward collision warning and lane-departure warning. Of course, Ford’s commitment to occupant protection extends beyond those basics. Thus, the car’s blind-spot monitor is bolstered by rear cross-traffic alert, and forward collision warning is integrated with adaptive cruise control and brake support. As for the Taurus’ lane-departure warning, it not only alerts drivers that they’re drifting from their lane, it also automatically adjusts steering torque for active assistance.

The Taurus is not a Top Safety Pick of the IIHS, not having been subject to the small front-overlap evaluation, but then again, the only “large family car” to earn that honor for 2016 is the Toyota Avalon, with a full Top Safety Pick+ recognition.

The 2016 Ford Taurus is getting along in years, but we remain bullish on the car even with a next-gen model being readied for the US marketplace. Certainly helping matters are the current vehicle’s truly full-size exterior dimensions and unique technologies, including Ford’s most up-to-date SYNC 3 infotainment system and a pair of EcoBoost engines. Both are designed to balance fuel efficiency and performance, but the biggest one, in the Taurus SHO, tilts the scales toward the latter. As a result, enthusiast owners also can benefit from a more subtle alternative to the muscle-car mania of the Dodge Charger lineup.

And because a new Taurus is expected in the near-term future, dealers may be more eager to make a deal on the 2016 models. 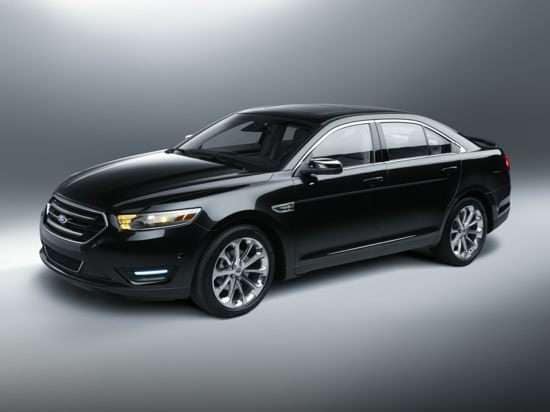