In the annals of American performance cars, certain acronyms are held with considerable reverence. Among them are, SS, R/T, GTO and SHO. The last one, as any auto enthusiast knowledgeable of the price of a gallon of premium will tell you stands for Super High Output and was first applied to a four-door sedan back in 1986 to delineate it from its lesser endowed sibling.

Back in the days of Madonna, (that’s Lady Gaga with a dollop of originality for you millennials) Ford introduced what was then a cutting edge family sedan. One that broke all sorts of sales records and went on to become one of the top selling cars in the nation year in and year out. Where today’s mid-size sedan charts are ruled by the likes of the Toyota Camry and Honda Accord, time was that parking space was reserved for the Ford Taurus, and the hottest Taurus of all was the Taurus SHO.

In an attempt to recapture some of that glory, (and quiet clamoring SHO enthusiast’s fervent demands) Ford reintroduced the Taurus as a 2010 model and with it, a new Taurus SHO. This time though the Taurus is a full-size near luxury sedan, and the Taurus SHO is positioned as the luxury performance sedan for the thinking man. Yes, man. Ford predicts the vast majority of SHO models with find themselves transporting the X chromosome.

Earl Lucas, a guy who has been drawing cars ever since he could hold a pencil, penned the boldly fluid design of the Taurus and the Taurus SHO. When handed the opportunity to do Ford’s flagship, he pulled out all the stops. Lucas added texture to the signature three-bar grille Ford’s favoring these days, and gave the overall look of the face of the car an X-shaped theme. This gives the car a bit of a glower when viewed dead on, projecting a sporty look overall. The headlights are raked to give a sense of speed emphasize the power dome of the hood.

A chrome spear, taken straight from Ford’s designs of yore, runs the width of the decklid to tie the taillights together into a unified theme. Take a look at any of Ford’s classic sedans from the sixties and you’ll see where Lucas drew (no pun intended — OK well, maybe sorta intended) his inspiration. The character lines running down the sides of the car emphasize its shoulders, giving it a brawny, yet sleek look. And if you’re the sort who pays attention to details, you’ll love the way the character line is incorporated into the fuel filler door. Add a set of the optional 20-inch wheels and you’re rolling.

In a conversation with Lucas, he told us the car was drawn with customization opportunities in mind. While he went all out to give it all he could, he knew the aftermarket would inevitably step in and take the design a little farther—and he welcomes the idea.

If you’ve spent any time at an auto show looking at concept cars like us, you’ve probably come away going; “That was so cool, why don’t they do production cars like that?” Well, in the case of the Taurus, the flowing center stack treatment dividing the front passenger compartment so neatly into two separate areas is exactly the kind of thing you see in concept cars all the time.

The hooded dash recalls the Mustang models of the 1960’s, which used that exact feature. Recessing the instruments under one of those hoods could have made them somewhat dreary to look at, but surrounding them with chrome accents and giving them ice-blue lighting made them sparkle with an aura of high technology instead.

The SYNC infotainment system, which combines radio, Bluetooth and MP3 player functions in a single user-friendly interface, is available on most Ford products these days and the Taurus is no exception. Sony provides sound system components, and SIRIUS Satellite Radio feeds them too.  Rain-sensing windshield wipers, power-operated rear sunshade, voice-activated navigation system, massaging seats, and push-button keyless start are also on the menu.

Determined to solidly position Taurus as both a strong value and its halo model, Ford has infused Taurus with luxury car-like driver aids including Adaptive Cruise Control with Collision Warning and Ford’s new Blind Spot Information System (BLIS) with Cross-Traffic Alert. With Taurus, these items made their first appearance in a competitively priced car.

Ford has, in our opinion, the nicest interiors of any American auto manufacturer. This is roundly exemplified in the Taurus. Fit and finish are flawless; there is genuine quality evident in the overall appearance of the accommodations. Seating is comfortable and legroom abounds in both the front and back seats. We do have one complaint in this area however, and it’s the same one we’ve made about every new Ford we’ve driven lately. The headrest protrudes too far forward, making you drive holding your head in an unnatural position. Ford says this is required to meet anti-whiplash standards. We say it’s a pain in the neck—literally.

Ford touts its EcoBoost V6 engine technology as producing the thrust of a V8 with the thirst of a V6, and the 365-horsepower 3.5-liter V6 fitted to the Taurus SHO solidly lives up to that promise. The engine delivers prompt, vigorous and seamless acceleration with no turbo lag whatsoever. You stomp, the car romps.

Taurus SHO comes with all-wheel drive as standard equipment (it’s optional on other Taurus models) and puts it to good use keeping the asphalt strip exactly where it belongs —nicely centered under the SHO’s tires. The Taurus SHO screams into corners with agility and grip as its primary calling cards. Traction is strong, steering is responsive (if a tad lacking in feel) and the overall effect is one of exceptional willingness to get up and get on.

In addition to the all-wheel drive system fitted to the car, this willingness to straighten serpentine lanes is also attributable to a lightweight suspension system consisting of MacPherson struts up front and a multi-link rear.  The chassis was tuned with input from Ford’s worldwide engineering departments to provide more involved handling and a better driving experience than the average American family sedan.

However, the Taurus is an American family sedan and is also expected to deliver a smooth and comfortable ride—which amazingly, it also does very well. The dual nature of the car is rather uncanny. Around town, it’s as docile as you expect a luxurious executive sedan to be. Out on the road with the turbos spinning furiously and the V6 belting out its distinctive aura, you’ll swear the car somehow magically shrank, as it accomplishes feats no car its size should honestly be expected to.

There is a flaw in its armor though. The braking system is not quite up the task of extended high-speed corner carving. During our test drive, we attacked a twisty downhill section rather spiritedly, calling upon the brakes to repeatedly erase speed to get us into the corners so we could accelerate off of them toward the next one. After about seven such instances we noted a readily discernable diminishment of braking ability. At the end of the run, heaping clouds of white smoke billowed from the SHO’s front wheel wells.

If you’re into aftermarket stuff, the first thing you’ll want to do is fit a cross-drilled and vented big brake kit to your SHO.

With the model so effortlessly delivering accessible, economical high-performance and a long list of luxury features, the cadre of loyal Taurus SHO fans who lobbied long and hard to bring the nameplate back have to be feeling suitably vindicated.

• Solid Value For The Money 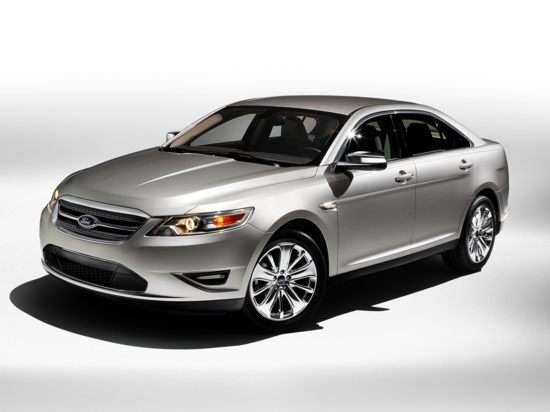