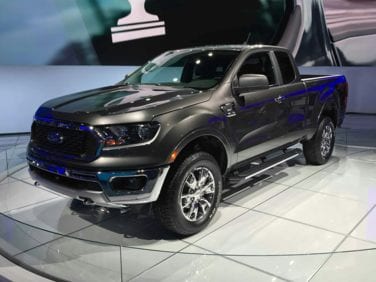 All About Ford Ranger

The Ford Ranger is a two-door, three passenger compact pickup, and a four-door, up to five passenger compact pickup. The Ford Ranger is slowly becoming something of an anachronism in the modern pickup truck market. While most other compact pickups have trended towards getting bigger, stronger and more capable, the Ranger has remained resolutely small in stature. As a result, the Ranger is now one of the only true compact trucks on the market. While the vehicle has not had a significant re-design since 1998, until very recently it has been able to maintain its status as the best selling small truck on the continent. The success of the Toyota Tundra threatens to eclipse the Ranger as America’s small truck of choice.

The Ranger can be ordered in versions that range from basic work trucks to more comfortable models intended as daily drivers. The Ranger XL represents the lowest trim available, and comes with easy to clean vinyl seats, a no-frills 2-speaker stereo and a 6 foot cargo box. The XLT adds air conditioning, a more listenable sound system and a nicer all around interior. The Ranger Sport provides color-keyed body cladding that streamlines the truck’s appearance, as well as a Class III trailer hitch and larger wheels. Finally, for those who are interested in hitting the trails with their pickup, the FX4 Off-Road trim gives buyers a limited-slip differential, all-terrain tires, skid plates to protect the front and rear undercarriage, and Rancho shock absorbers.

A 5-speed manual or automatic transmission can be paired with one of three engine choices. Leading the list is an inline 4-cylinder that displaces 2.3 liters and generates 143 horsepower. A slightly stronger 3.0 V6 producing 148 horsepower is next up on the list, and while it does produce 26 more lb-ft of torque than the 4 cylinder, one wonders why this options is available at all – especially when the final engine choice is a 4.0 liter V6. This engine is the most capable of the lot, with 207 horsepower and 238 lb-ft of torque. While the 4-cylinder may be acceptable for those who require only minimal performance, the 4.0 V6 is clearly the workhouse option for this compact pickup. It is telling that the FX4 trim is available exclusively with this engine. Most versions of the Ranger are also available with optional 4-wheel drive.

The lightness of the small Ranger’s chassis means that it is able to enjoy fairly good fuel mileage for a pickup truck, especially the inline 4 which turns in 21 miles per gallon in the city and 26 on the highway. The largest V6 drops the efficiency down significantly to 20 highway miles per gallon and 15 in stop and go traffic. The 4-cylinder’s discrete fuel-sipping makes it an ideal option as a field vehicle where fill-ups may be few and far between, or as a local transport truck for a larger facility or campus. In other situations, excellent ground clearance and good available power make the Ford Ranger as effective off the road as it is easy to drive when in move civilized environments.

While this truck may not have evolved nearly as much as its competitors in the past few years, the Ranger is due for a serious update in the next few years. Ford is in the middle of re-thinking its entire pickup truck lineup, and the Ranger will definitely benefit from any of the decisions that are made in that regard.

The 2009 Ford Ranger is a carryover from 2008. The 2009 Ranger can be ordered in XL, XLT, Sport and FX4 Off-Road trims. The first three trims come with a 2.3 liter 4-cylinder engine as standard equipment. This motor produces 143 horsepower and 154 lb-ft of torque, and is matched with a 5-speed manual. A 5-speed automatic is available as an option. The engine turns in fuel economy of 21 miles per gallon on the highway and 26 miles per gallon in city when shifted through the manual transmission. The FX4 Off-Road edition of the Ranger comes with a 4.0 liter V6 engine that is optional on all other versions of the truck. This motor is rated at 207 horsepower and 238 lb-ft of torque, and sees fuel mileage of 15 miles per gallon in the city and 21 miles per gallon in highway driving. Transmission options are identical to those offered with the 4-cylinder motor.