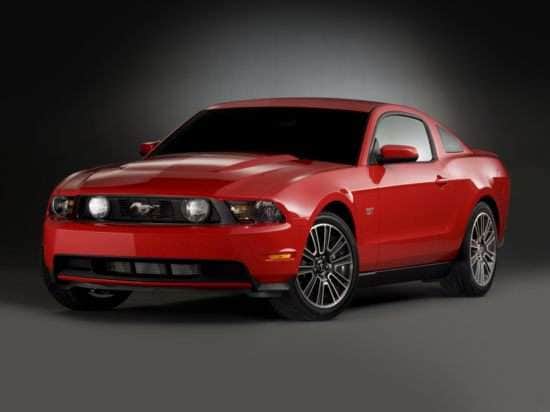 Five years ago when Ford redesigned the Mustang, there was little competition for the V-8-powered, rear-wheel drive muscle car. For the 2010 model year, however, nameplates and horsepower figures would have most believing that we’re back in the late 1960s. Just in time for the reintroductions of both the Dodge Challenger and Chevrolet Camaro, the 2010 Ford Mustang has an all-new look, a more upscale interior and a few more ponies under the hood. Ford unveiled its all-new Mustang in both coupe and convertible guise at the 2008 Los Angeles International Auto Show.

While the 2005 Mustang redesign focused on using cues from historical Mustang designs, Ford redesigned the 2010 Mustang to provide a more aggressive look. The newly designed Mustang is instantly recognizable among Mustangs old and new, but with small tweaks here and there and a couple new body lines, the new Mustang instantly puts the previous model to shame. Up front, the redesigned headlights hearken back to early 1970 model Mustangs with dual strip turn signals. Out back, the 2010 Mustang gets a new interpretation of the Mustang’s signature three-bar taillight and a revised lower fascia with a functional and stylish matte-black plastic diffuser. Taking an idea straight out of aftermarket catalogs, the LED taillights also feature sequential illumination with the turn signals. The new Mustang GT gets a modern-looking “duck tail” spoiler to replace the raised version found on the previous model, which also houses an optional integrated rear view camera.

The profile of the 2010 Mustang reveals a modest upkick in below the side quarter window that pays homage to the original ‘Stang and helps add a unique character line. Another unique aspect of the new Mustang was actually introduced on the 2009. The Glass Roof option features a large, fixed-position glass panel that stretches from the A-pillar to behind the front seats creating a more open atmosphere and a middle ground between the coupe and the convertible.

As much work that was done to give the Mustang a meaner look from outside the car, the fine attention to detail inside is where the new Mustang really pays off. From better fit and finish to higher quality materials, the Mustang’s cabin offers a more welcoming atmosphere. A sportier steering wheel with aluminum trim and revised LED backlit gauges not only increase the visual appeal of the new ‘Stang, but they also help to improve visibility for the driver. The instrument panel now uses a softer material and a more aesthetically pleasing design. For added dimension, the “dual brow” that runs along the top of the dash is now reflected along the lower edge and is inset with real aluminum trim. The end result is an interior with a look and feel deserving of a sports car instead of something concocted in an economy car or pickup truck.

In the end, the Ford Mustang will always be a muscle car, so Ford gave its new pony car a considerable bump in muscle. For the base model, which generally sells more units, Ford offers a 4.0-liter V-6 that puts out 210 horsepower, while the performance-oriented GT gets the 4.6-liter, three-valve V-8 good for 315 horsepower and 325 lb-ft of torque. Helping the new Mustang GT increase both horsepower and torque, Ford again dips into the aftermarket ideas and offers a cold air induction system as standard equipment. Both the V-6 and V-8 engines breathe easier through an exhaust system featuring tips with an increased diameter of one half inch (three inch exhaust for V-6 and three and half inch exhaust for the V-8). Balancing performance and safety, the Mustang comes standard with four-wheel ABS, traction control and AdvanceTrac w/ RSC. The AdvanceTrac system now offers a performance mode to allow for more aggressive handling maneuvers. Besides retuned springs and dampers, the 2010 Mustang’s suspension is essentially carried over.