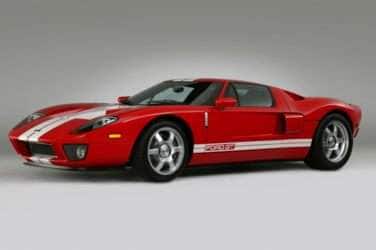 All About Ford GT

The Ford GT40 race car was one of the dominant figures in international competition in the 1960’s. Built specifically to beat Ferrari, the GT40 featured a high performance chassis and engine wrapped in a beautifully sculpted shell. The vehicle was never made available to the public as a passenger car, but Ford revisited the styling with the updated GT 90 concept car in 1995. In the early 2000’s, it was decided that Ford needed a halo car to help them compete with the Dodge Viper and the Chevrolet Corvette. This lead to a new GT 40-inspired concept car hitting auto shows in 2002, and a production version of the vehicle, dubbed the Ford GT, going on sale in 2003.

The 2006 Ford GT is an almost pitch-perfect rendition of what the GT 40 race car would look like if it had been designed with today’s safety and styling considerations in mind. Substantially larger than the original vehicle, the Ford GT nonetheless maintained a look that was consistent with the aesthetic of the past racing champion. The resemblance continues in the rear-mounted engine bay, where a supercharged 5.4 liter V8 engine generates a mind-blowing 550 horsepower and 500 lb-ft of torque. These are the kinds of numbers required to take the checkered flag in the world of supercar performance, and the GT backs them up with a top speed of 212 miles per hour and a quarter mile time of only 11.2 seconds. Accelerating from 0 to 60 miles per hour is accomplished in a scant 3.3 seconds – well in line with expectations at this price and prestige point. Shifting is accomplished via a 6-speed manual transmission.

In terms of interior design, the Ford GT continues its race car for the street motif, with a deeply recessed gauge pod extending to the middle of the dash and containing a pleasing assortment of analog markers and anachronistic toggle switches. A rounded ball shifter with a circular boot protrudes from the metallic center console, and the circular theme is continued on both seat accents and heating vents. The Ford GT is about blazing speed, not coddling occupants, and although the interior of the GT is a pleasant place to spend some time, it is clearly not intended to compete with that of a Ferrari or Audi.

Of course, once the supercharged V8 has been fired up, abstract concepts like interior luxury seem to fade into the distance. The Ford GT is more than just straight line speed – the entire platform provides an intense driving experience that is clearly intended to squeeze the maximum amount of performance out of both the driver and the drivetrain. The super-tight body construction and race-inspired chassis conspire to create a very rigid vehicle that responds to driver commands with incredible poise and composure.

The 2006 Ford GT is clearly the most capable sports car ever produced by the company. Unfortunately, the design pushed to the very edge of accepted safety standards, and production was halted at the end of this model year due to changing bumper regulations.