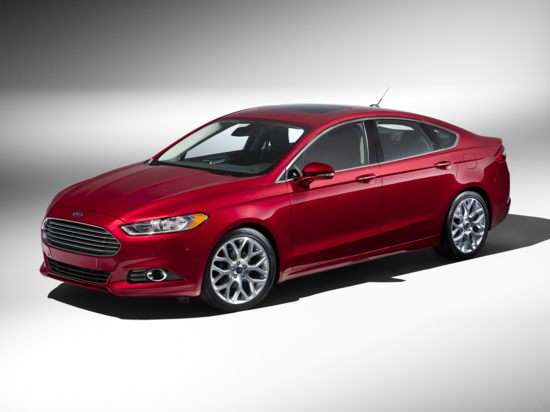 Ford sells the 2013 Fusion in standard S, popular SE, and luxurious Titanium trim levels with a choice between three gasoline engines. The Fusion Hybrid and a plug-in version of the Fusion Hybrid called the Fusion Energi are covered in separate overviews.

With three different gasoline powertrains available in the 2013 Fusion, there’s something for everyone. The Fusion S and SE are equipped with a standard 2.5-liter 4-cylinder engine making 175 horsepower. A 6-speed automatic transmission is paired with this powerplant.

The Fusion SE can be upgraded with a turbocharged 1.6-liter EcoBoost 4-cylinder engine making 173 horsepower (on regular fuel) or 178 horsepower (on premium fuel). Buyers can choose a 6-speed manual gearbox or a 6-speed automatic transmission with this engine, which includes automatic stop/start technology to help maximize gas mileage.

Fusion Titanium models have a standard turbocharged 2.0-liter EcoBoost 4-cylinder engine generating 237 horsepower, and a 6-speed automatic transmission. Front-wheel drive is standard for all Fusions, and the Titanium model is offered with optional all-wheel drive.

Fusions equipped with the standard 2.5-liter 4-cylinder engine are rated to get 22 mpg in the city, 34 mpg on the highway, and 26 mpg in combined driving.

Choose the optional 1.6-liter EcoBoost 4-cylinder engine in the Fusion SE, and you can expect to get 24 mpg in the city with the automatic transmission, 37 mpg on the highway with both transmissions, and up to 29 mpg in combined driving, according to the EPA.

The Fusion Titanium’s standard 2.0-liter EcoBoost 4-cylinder engine returns 22 mpg in the city, 33 mpg on the highway, and 26 mpg in combined driving. Opt for AWD, and the highway rating drops to 31 mpg, while the combined rating is 25 mpg.

In crash tests conducted by the NHTSA, the 2013 Ford Fusion receives a 5-star protection rating, the highest possible. The Insurance Institute for Highway Safety (IIHS) calls the Fusion a “Top Safety Pick Plus,” thanks to its “Acceptable” rating in the tough new small overlap frontal impact test.

Ford offers the 2013 Fusion with an impressive array of technologies. Standard equipment includes MyKey, which allows the car’s owner to program specific safety-related driving settings, especially helpful when there are teenaged drivers in the household. Sync connectivity is also standard, and when a paired phone is aboard at the time of an airbag deployment, a 911 Assist feature speeds rescuers to the scene of the accident.