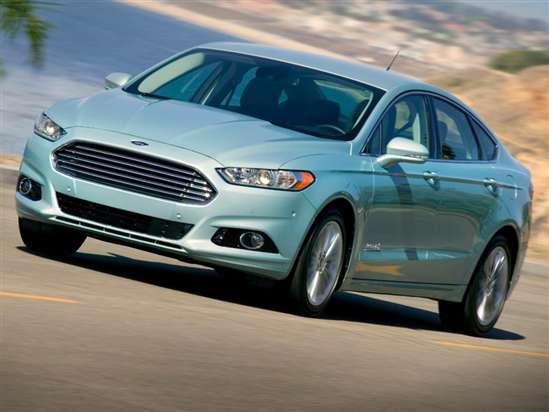 Three versions of the Fusion are available: Fusion, Fusion Hybrid, and Fusion Energi, the latter a plug-in hybrid model. Each can be outfitted in S, SE, or Titanium trim.

Ford provides five different powertrain choices for the Fusion. A 175-horsepower, 2.5-liter 4-cylinder engine is standard for S and SE models, while a more efficient 181-hp, 1.5-liter EcoBoost turbocharged 4-cylinder is optional for the SE.

Alternatively, a 240-hp, 2.0-liter EcoBoost turbocharged 4-cylinder is available for the SE and standard for the Titanium. All-wheel drive is optional with the 2.0-liter EcoBoost engine, while a 6-speed automatic transmission comes standard across the board.

Fusion Hybrid models have a 2.0-liter 4-cylinder gasoline engine combined with an eCVT transmission, an 88 kW electric motor, and a 1.4 kWh lithium-ion battery to produce a combined 188 hp. Meanwhile, the Energi plug-in hybrid’s larger battery provides a pure electric range of 19 miles and a combined 188 to 195 hp (depending on charge status). It takes 7 hours to recharge the Fusion Energi using a standard household outlet, or 2.5 hours using a 240V outlet.

The NHTSA gives the 2015 Fusion an overall crash-test rating of 5 stars, but consumers should note the 3-star rating for driver protection in a side-impact collision. The Insurance Institute for Highway Safety (IIHS) gave the 2014 Fusion a “Top Safety Pick” rating, but had not carried that rating forward for the 2015 Fusion as this summary was written.