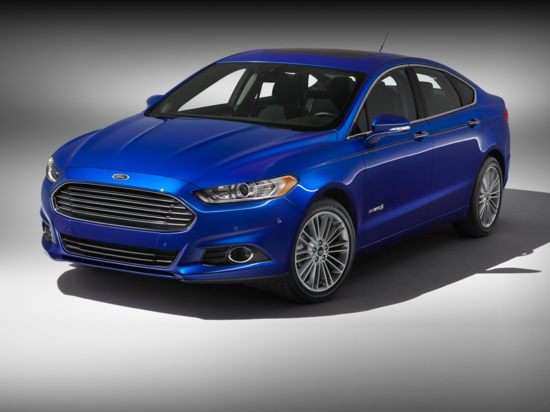 Changes for the 2013 Ford Fusion Hybrid:

The redesigned 2013 Ford Fusion Hybrid is sold in mainstream SE and luxurious Titanium trim levels. A plug-in version of this car is also for sale, called the Fusion Energi. The Fusion Energi is covered separately.

The Ford Fusion Hybrid is known as a “full hybrid,” which means it can travel at lower speeds and for short distances purely on electric power before the gasoline engine kicks in.

An Atkinson-cycle 2.0-liter 4-cylinder gasoline engine forms the basis of the Fusion Hybrid’s powertrain, paired with an 88 kW electric drive motor, a 1.4 kWh recyclable lithium-ion battery pack, and a continuously variable transmission (CVT). A regenerative braking system captures kinetic energy that would otherwise be lost, charging the battery pack in the process.

Ford says the Fusion Hybrid’s combined horsepower rating is 188, and that the car can travel at speeds up to 62 mph operating on battery power alone.

According to the EPA, the 2013 Fusion Hybrid is rated to get 47 mpg in the city, on the highway, and in combined driving.

The new Ford Fusion is called a “Top Safety Pick Plus” by the Insurance Institute for Highway Safety (IIHS), thanks to an “Acceptable” rating in the stringent new small overlap frontal impact test combined with “Good” ratings in all other evaluations. The NHTSA gives the 2013 Fusion a 5-star overall rating for crash-test performance, the highest possible score.

The Fusion Hybrid is equipped with a SmartGauge with EcoGuide display that shows a vine with green leaves growing on it. The more efficiently the car is driven, the more leaves grow on the vine, effectively serving as coach to encourage the driver to go easier on the gas.

Additionally, the 2013 Fusion Hybrid is available with the same list of technologies offered for the standard Fusion. Sync connectivity with 911 Assist is standard, a system that speeds rescue personnel to the scene of an accident if a paired phone is aboard the vehicle when the airbags deploy. MyKey is also standard, allowing the car’s owner to program seatbelt alerts, speed and stereo volume limits, and other functions.