The Ford Fusion Hybrid is a four door five passenger gas/electric mid size sedan that gets over 40 MPG on the highway.  Powered by a 2.5 Liter four cylinder internal combustion engine combined with a 35 HP electric motor being fed electrons via a nickel metal hydride battery with energy capturing regenerative braking that allows the Fusion to travel up to 47 MPH as a zero emission battery electric vehicle, sending a total of 191 HP to the front wheels through a fuel saving electronically controlled continuously variable transmission and gets an estimated 36 MPG in the city and as much as 41 MPG on the highway, starting at $28,700.

On the inside, the Fusion Hybrid gets eco friendly cloth seating, made from 85% post industrial materials that would have otherwise ended up at the dump; or optional leather trimmed and heated buckets with a solid rear bench as well as the standard leather wrapped steering wheel and shift knob.  One of the hybrid’s most attractive features is the dual LCD SmartGauge with Eco Guide that displays an assortment of efficiency information, with leaves that appear in the display when the Fusion is being driven efficiently, and will even grow vines and blossom flowers if the vehicle’s overall economy is high enough.

As far as in car entertainment is concerned, the Fusion Hybrid comes with a six speaker AM/FM/MP3 player with a six disc CD changer as well as XM Satellite radio standard.  While a Sony Premium 12 speaker stereo, including two subwoofers and surround sound, is available as an option.  However the 17 inch 15 spoke rims come standard.

A list of similar cars to the Fusion Hybrid include the 2012 Toyota Camry Hybrid, 2012 Hyundai Sonata Hybrid and 2012 Buick LaCrosse with eAssist. 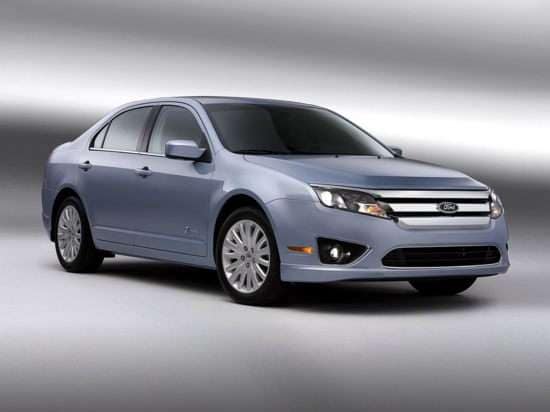