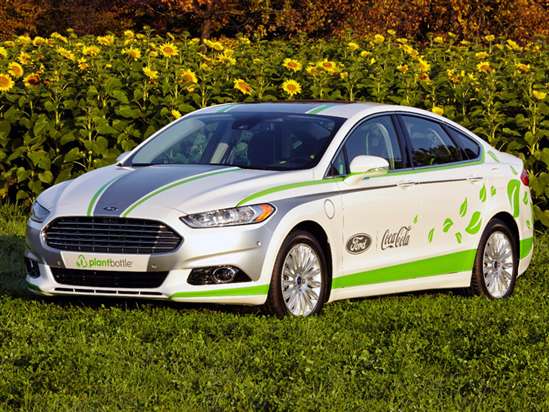 Changes for the 2014 Ford Fusion Hybrid:

A new, lower-priced S model joins the 2014 Fusion Hybrid lineup, making 47 mpg more accessible at $27,095. Both the Fusion Hybrid and the Fusion Energi plug-in hybrid can be optioned with inflatable rear seat belts for 2014, and painted in new colors called Sunset and Dark Side.

Both the Fusion Hybrid and the Fusion Energi have 2.0-liter, 4-cylinder, gasoline engine, an electric assist motor, a continuously variable transmission, a lithium-ion battery, and a regenerative braking system. Together, these components generate 188 horsepower, and the Fusion Hybrid can coast or cruise on electricity alone at speeds up to 85 mph.

The Fusion Energi adds a larger 7.6 kW lithium-ion battery for up to 21 miles of purely electric driving range. Using a 120-volt household outlet, the battery recharges in about seven hours. Opt for the 240-volt quick charger, and it takes 2.5 hours to top off the battery. Ford says that when the Fusion Energi is operating in EV mode, it loses 70 horsepower compared to when the gasoline engine is also running, but the instant torque makes it hard for the driver to tell the difference.

According to the EPA, the 2014 Ford Fusion Hybrid gets 47 mpg no matter where you drive it. The Fusion Energi is rated to return 100 MPGe when driven in both EV and hybrid modes. Travel purely in hybrid mode, and the Energi model gets 44 mpg in the city, 41 mpg on the highway, and 43 mpg in combined driving.

The National Highway Traffic Safety Administration (NHTSA) gives the 2014 Ford Fusion a 5-star overall crash-test rating, but the car’s individual side-impact rating for the driver amounts to no more than 3 stars.

The Insurance Institute for Highway Safety (IIHS) thinks the Fusion is one of the safest cars available today. All versions are named a “Top Safety Pick” for 2014, and models with the Adaptive Cruise Control and Forward Collision Warning system qualify for a “Top Safety Pick Plus” rating this year.

The 2014 Ford Fusion Hybrid and Fusion Energi can be equipped with a Blind Spot Information System with Cross Traffic Alert, a Lane Departure Warning system, a Lane Keeping Assist system, and driver monitoring system that detects when he or she might be getting drowsy behind the wheel. An Adaptive Cruise Control system is also available, and includes a Forward Collision Warning system that also primes the brakes for maximum response.

Additionally, the Fusion Hybrid and Energi are available with Active Park Assist, which steers the car into a parallel parking space while the driver operates the pedals and transmission. MyFord Touch technology with Sync Services provides 911 Assist when a paired smartphone is aboard the vehicle, speeding rescue following a crash and airbag deployment.