West Los Angeles is a brutal driving environment. Streets are crowded with lots of people in lots of cars, and everyone is in a big, fat, self-important hurry to get somewhere. On the unusually gray and dreary day during which I am briefly evaluating a new 2013 Ford Fusion Energi plug-in hybrid, I’m riding shotgun while the driver is trying to see how far it will take us on electricity before the gasoline engine fires up and starts consuming unleaded. As a result, we’re in no hurry at all.

Chaos surrounds the Ice Storm Metallic Fusion Energi as we slowly and silently glide along crumbling city streets, ensconced on standard leather-wrapped and heated front seats. Conversation is easy in the quiet cabin, and the ride quality is sublime. If only I could raise the front passenger’s seat off of the floor for greater comfort and a better view out. Perhaps the Fusion Energi’s roomy back seat would have been a better choice.

In any case, thanks to heavy traffic, I’ve got plenty of time to contemplate the details Ford shared about the new Fusion Energi prior to our departure on the short, purely urban test-drive route. This midsize family sedan is equipped with a sophisticated plug-in hybrid powertrain and remarkably refined driving dynamics, with few compromises required in exchange for its 100 MPGe combined fuel efficiency rating.

The 2013 Ford Fusion Energi is based on the Fusion Hybrid, and is equipped with the same 2.0-liter Atkinson-cycle 4-cylinder engine, 88 kW electric motor, and eCVT transmission as that model. The difference is that the Fusion Energi swaps a 7.6 kWh Lithium-ion battery pack in for the Fusion Hybrid’s much smaller 1.4 kWh battery. This, is turn, reduces trunk space from 12 cu.-ft. to 8.2 cu.-ft., and adds 250 pounds of weight to the vehicle, bringing the base curb weight to 3,913 pounds. Total system horsepower is greater, too, at 195 compared to 188.

The only other modifications are “Energi” badges, a free 5-year subscription to a MyFord Mobile smartphone application, and a charge port mounted to the left front fender. The charge port is surrounded by a translucent ring that illuminates in quartiles to convey an estimate of the battery pack’s state of charge. A more specific measure of remaining charge is offered in the Fusion Energi’s SmartGauge with EcoGuide cluster, or via the MyFord Mobile App.

In addition to providing battery charge information, the Fusion Energi’s MyFord Mobile App provides access to a variety of information. Owners can schedule battery recharging for times when utility rates are lowest, find the nearest charging station, learn what the car is saving in terms of fuel costs and carbon-dioxide emissions, and pre-condition the cabin on hot and cold days, running the heater or air conditioner while the car is still plugged into the grid. Additionally, this mobile application helps the owner to find the car in a crowded parking lot, remotely start the engine, and remotely lock and unlock the car’s doors.

According to Ford, the new 2013 Fusion Energi provides its driver with up to 21 miles of EV range, and a total of 620 miles of total range once the gasoline engine kicks in. In addition to 17-inch wheels wrapped in low rolling-resistance tires, standard equipment includes a charging cord designed to work with a standard household outlet, and it takes 7 hours to top off a drained battery. Owners can opt for a 240-volt quick-charger that cuts recharging time down to 2.5 hours.

Three driving modes are available, selected using the “EV” button on the Fusion Energi’s center console. The driver can select EV mode for when pure electric propulsion at speeds up to 85 mph is desirable, and if the driver decides to conserve the car’s full battery charge, it can be driven purely using the 141-horsepower 2.0-liter 4-cylinder gasoline engine. The third driving mode is gas-electric hybrid, in which the battery pack and electric motor are used to launch the vehicle, and then the gasoline engine propels the car at higher speeds.

Ford says the 2013 Fusion Energi is rated to get 108 MPGe in the city, 92 MPGe in the highway, and 100 MPGe in combined driving. The SmartGauge with EcoGuide display includes a screen depicting green leaves that multiply the more efficiently the car is driven. If you don’t see very many green leaves, you’re not driving efficiently. Another screen shows the regenerative braking system’s Brake Coach feature, which displays the percentage of kinetic braking energy recaptured with each stop. The higher the percentage, the more efficiently the driver is driving.

Ford offers the new Fusion Energi in two levels of specification. The SE version is $1,400 less expensive than the Titanium version because it doesn’t include a Sony premium audio system with HD Radio and 12 speakers, expanded Sync services, rear parking assist sensors, a reversing camera, or Intelligent Access with keyless start. That’s right. The Fusion Energi SE has a switchblade-style key that gets twisted in a conventional ignition cylinder. Additional upgrades that are standard on the Fusion Energi Titanium include remote engine starting, ambient cabin lighting, doorsill scuff plates, chrome accented door handles, and a rear spoiler.

The least expensive version of the 2013 Ford Fusion Energi SE costs $39,495, including the $795 destination charge. Choose the Energi Titanium trim level, and the price rises to $40,895. Add all the options to the Energi Titanium, and now the sticker reads $46,410. Clearly, that’s expensive.

The good news is that the Fusion Energi models qualify for a $3,750 federal tax credit. Additionally, Ford launched the car with a $1,500 rebate, and state, local, and employer incentives may be offered for purchases of green cars. For example, the state of California deposits $2,500 in your pocket for buying a Fusion Energi, and provides single-driver access to carpool lanes on that state’s congested freeways.

With incentives, a California resident effectively buys a Fusion Energi for under $32,000, and gets to drive in the carpool lane while everyone else sits in traffic. That alone might be worth the car’s price tag.

Silent and refined when operated in EV mode, the Fusion Energi’s interior is as modern and appealing as its exterior. My test sample’s Dune leather cabin looked terrific, thanks to the 2-tone door panels and dashboard, which simultaneously appear upscale while cutting glare and reflections in the windows on sunny days.

Aside from the aforementioned complaint about how low the front passenger’s seat is mounted, the 2013 Fusion is a comfortable car, and the Energi model is equipped with standard leather seats that are heated in front. Rear seat room is not compromised by the installation of a larger battery pack. Rather, the bigger battery chews up trunk space, yet the Fusion Energi retains its 60/40-split folding rear seat, allowing the car to carry longer items, such as skis, with ease.

The number of reconfigurable display screens, menus, and settings associated with the SmartGauge with EcoGuide system and the MyFord Touch infotainment system is overwhelming at first, but as is true of any new technology, once you’ve got everything configured the way you want it, owners acclimate quickly. I will say this, however. The latest version of MyFord Touch is more intuitive and responsive than the original flavor.

After 10 miles of cross-town traffic, most of which were covered in EV driving mode, we came to a stop on a bluff overlooking the Pacific Ocean and I jumped into the driver’s seat, noticing as I stepped into the car that the charge port’s translucent ring showed 50% of the battery charge remaining. My co-driver had driven responsibly and efficiently, traveling slower than surrounding traffic for most of those 10 miles. But time was of the essence, I had photos to shoot, and we needed to get the car back to Ford on time.

Zoom! Off I went down the lumpy California Incline ramp leading from Santa Monica to the Pacific Coast Highway, where traffic moves at a good clip when it can. Then, we burned up some battery moving and positioning the car for pictures at the beach. Then, I performed a full-throttle merge onto PCH and started threading the Fusion Energi through thickening afternoon traffic.

It was that full-throttle merge that revealed the Fusion Energi’s leisurely acceleration when placed in EV mode. Electric cars deliver all of their torque right off the line, and it trails off not long thereafter. As a result, the Fusion Energi feels lively at low city speeds, but getting up to 60 mph or more requires patience, and extra room. My recommendation would be for Fusion Energi owners to switch over to gas-electric hybrid propulsion to take advantage of all the available horsepower and torque when strong acceleration is required.

In other ways, the Fusion Energi’s weight gain is masterfully masked. The car doesn’t feel like it weighs almost two tons, testament to the beautifully tuned suspension that coddles the driver as much as it connects the driver to the road surface. Ford figured out how to properly execute electric steering years ago, and the Fusion Energi’s tiller feels natural, responsive, and properly weighted. Better yet, the Fusion Energi’s regenerative brake pedal feels nearly as good as one connected to a traditional 4-wheel-disc system.

Given that I was driving the Fusion Energi like I would drive any car, without regard to maximizing battery life, it’s no surprise that this Fusion depleted its Energi right around mile 15. That’s short of the claimed 21-mile range on a full battery, as well as the 17-mile range indicated by our particular test vehicle when we set out on the route. This shortened battery life is reflected in the MPGe number we achieved during the 20-mile city drive. Remember, the EPA says this car will get 108 MPGe in the city. We averaged 94.4 MPGe.

While introducing the Fusion Energi to assembled members of the media, Ford talked about how the Fusion Hybrid attracts the youngest buyers in the midsize segment, and in California’s major cities, about 75% of buyers are new to the Ford brand. Not only are they new customers for Ford, but they’re also trading in luxury vehicles to get into a Fusion Hybrid. The reason, aside from the Fusion Hybrid’s 47-mpg combined driving fuel economy estimate, is styling.

Indeed, the Ford Fusion is an attractive car. It’s also comfortable, refined, sophisticated, safe, and technologically advanced. And in Fusion Energi format, it leapfrogs all of its direct competitors by offering plug-in technology combined with elegant, tasteful, stealthy design. 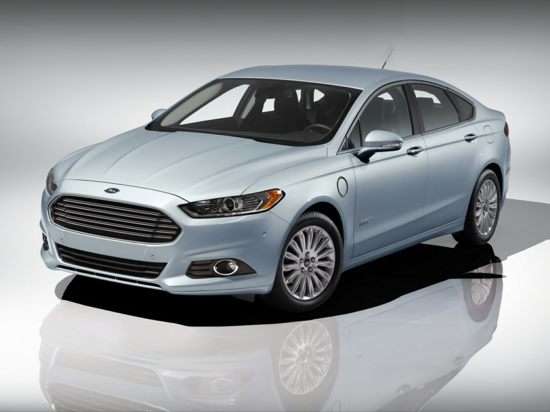