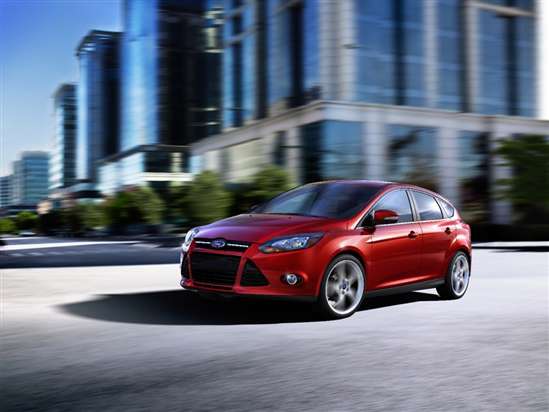 Small car buyers choosing the 2014 Ford Focus can select between a 4-door sedan and a 5-door hatchback in a variety of flavors. The performance-tuned Focus ST and the Focus Electric models are covered in separate summaries. Remaining Focus models are offered in S (sedan only), SE, and Titanium trim levels.

The 2014 Focus is equipped with a 160-horsepower, 2.0-liter 4-cylinder engine and a standard 5-speed manual gearbox delivering power to the car’s front wheels. A 6-speed PowerShift automated manual transmission is optional.

The National Highway Traffic Safety Administration (NHTSA) gives the 2014 Focus a 5-star overall crash-test rating, the highest score possible. The Insurance Institute for Highway Safety (IIHS) calls the 2014 Focus a “Top Safety Pick Plus,” the highest accolade given. The Focus received an “Acceptable” rating in the tough new small overlap frontal-impact test, making it eligible for the “plus” designation.

Select a Focus SE, and the car is equipped with standard MyKey programmable vehicle features and Sync Bluetooth connectivity with 911 Assist. As long as a paired phone is in the car, 911 Assist activates if the car’s airbags deploy and helps speed rescuers to the scene of the collision. Rear parking sensors and a reversing camera are standard on Focus Titanium models.

Options for the SE and Titanium include MyFord Touch with navigation, mobile Wi-Fi connectivity, HD Radio, iTunes song tagging, text-to-voice technology, and more. An Active Park Assist system is available for the Focus Titanium, and steers the car into a parallel parking space while the driver operates the foot pedals.