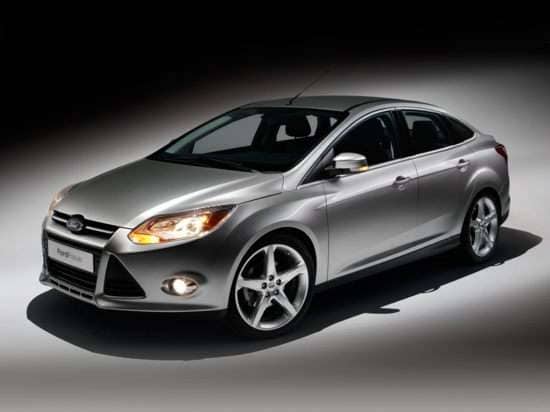 Following a redesign for the 2012 model year, the 2013 Ford Focus sees few changes. A manual transmission is added for the Focus Titanium trim level, and a new Focus ST performance model debuts. Ford simplifies the lineup by dropping the SEL version of the Focus.

The 2013 Ford Focus is sold in 4-door sedan and 5-door hatchback body styles. The Sedan is offered in S, SE and Titanium trim levels; the 5-door can be equipped with SE or Titanium trim. Additional versions of the Focus 5-door include the new performance-tuned Focus ST and the Focus Electric with its pure electric powertrain.

All Focus models except for the Electric and the ST are equipped with a direct-injected, 2.0-liter 4-cylinder engine generating 160 horsepower. A 5-speed manual gearbox is standard, with a 6-speed dual-dry clutch automated manual transmission optional.

The new 2013 Focus ST is equipped with a turbocharged, 252-horsepower, 2.0-liter 4-cylinder engine equipped with an “overboost” function that improves torque for up to 15 seconds when added responsiveness is desirable. Additionally, this model receives a sport-tuned suspension, special electric steering calibration, and standard 18-inch wheels and tires.

Having debuted in 2012, the Focus Electric returns, equipped with 5-passenger seating and an electric powertrain comprised of a 107 kW electric drive motor with a single-speed transmission and a rechargeable 23 kWh Lithium-ion battery pack. The Focus Electric makes 143 horsepower and recharges in less than 4 hours when using the optional 240-volt home charging station.

Focus models equipped with the standard engine are rated to get anywhere between 26 mpg in the city with the manual gearbox to 40 mpg on the highway with the automated manual transmission and the optional Super Fuel Economy Package. The sporty Focus ST is rated to get 23-mpg city/32-mpg highway, and the Focus Electric achieves a rating of 110 MPGe.

All versions of the 2013 Ford Focus receive a 5-star overall crash-test rating from the NHTSA, the highest rating possible. The Insurance Institute for Highway Safety calls the 2013 Focus a “Top Safety Pick.”

Ford’s MyKey technology is standard for the 2013 Focus, giving owners the ability to program incessant seatbelt usage warning chimes, limit the car’s top speed, limit the car’s maximum stereo volume, and other safety-related settings. Sync smartphone pairing is included for all except the base Focus S Sedan, and offers 911 Assist to help speed rescuers to the car’s location following an airbag deployment.

A next-generation version of MyFord Touch with navigation is optional for the 2013 Focus, offering touchscreen and voice control of the car’s infotainment system. Highlights include HD Radio with iTunes tagging capability, Wi-Fi connectivity, and text-to-speech technology. A Sony premium audio system is offered for the Focus, as well as an Active Park Assist system that steers the car into a parallel parking space while the driver operates the pedals and transmission.