IRVINE, Calif. – Ford Motor Company has termed 2005 the “Year of the Car,” and with the debuts of the redesigned Mustang, the Five Hundred sedan and the GT, the pronouncement is definitely appropriate. The new Mustang gallops along on its first new chassis in 26 years, the Five Hundred is the blue oval’s all-new full-size sedan fighter, and the GT is a 500-horsepower monster priced at a fraction of its competition. Add in the recently overhauled F-150, the beefed up Super Duty trucks and the versatile Freestyle crossover vehicle, and most will agree it’s a good time to be considering a Ford product.

Thankfully, Ford hasn’t spent all of its resources on new nameplates and complete redesigns. They’ve also made an attempt at keeping existing products fresh and appealing, as is the case with the 2005 Ford Focus. This new iteration can be compared to a college student heading into junior year. Rather than being different for the sake of being different, a college junior is a bit more image-conscious, hangs with a somewhat more mature crowd, and begins amassing a wardrobe that says, “Hire me” rather than “Wash me.”

With its updated image comes a new lineup of models. The 2005 Ford Focus can be ordered in one of four body styles – a three-door hatchback (ZX3), a five-door hatchback (ZX5), a four-door sedan (ZX4), and a four-door wagon (ZXW). The ZX3 model designation is carried over from 2004, but the base is now called the S, the Comfort model is now the SE, and the Premium is now the SES. Also carried over for 2005 is the ZX5 badge, with the new S/SE/SES designations. Gone for 2005 are the LX, SE and ZTS sedan models. All sedans are now known as the ZX4, with S, SE, SES, and ST trims available. Lastly, the 2005 Ford Focus wagon can be ordered as the ZXW SE or ZXW SES model.

Entry-level S models are sparsely equipped and include a 2.0-liter, four-cylinder engine pumping out 136 horsepower and 133 lb.-ft. of torque. Power is managed by a five-speed manual transmission, windows and mirrors are manually operated, standard wheels are steel 15s with wheelcovers, and the audio system includes a single-disc CD player. A move up to the SE model adds air conditioning, power door locks/mirrors/windows, a front center armrest, variable intermittent windshield wipers, an MP3 player, and keyless entry. Splurge for the SES and enjoy 16-inch alloy wheels, a tilt and telescoping leather-wrapped steering wheel, front fog lights, a tachometer, cruise control, and a six-disc in-dash CD changer.

Reserved for driving enthusiasts is the 2005 Ford Focus ZX4 ST sedan, which is the car our editors got plenty of seat time in over the course of seven days and several hundred miles. The ZX4 ST sports a 2.3-liter, DOHC four-cylinder engine generating 151 horsepower at 5,750 rpm and 154 lb.-ft. of torque at 4,250 rpm. Standard features include a rear spoiler, traction control, heated body color mirrors, a rear air dam, fake carbon fiber dash trim, and a sport-tuned suspension. Our tester was also equipped with optional leather seats, a power moonroof, a Sony sound system, and side-impact airbags, all for a grand total of $20,375 including destination charges. That’s about $7,000 more than the basic ZX3 S model.

When it was first released, the Ford Focus had a polarizing effect on car buyers. Some were attracted to its edgy styling, others thought it had been hit with the ugly stick a few too many times. And let’s be honest, personality only goes so far if your face makes people cringe. But, despite the controversial looks, the Focus has been a big hit for Ford.

For 2005, the Ford Focus has a fresh exterior design, with an overall look that is simple, understated, and borders on classy. The large, angular headlights have been replaced with lenses that are less pronounced and give the front end a cleaner appearance, while bulbous fender and quarter panel flares have been made more subtle. Front and rear roof pillars are relatively thin and the rear seats lack headrests, so outward visibility is decent all around. Though they look sleek, the size and position of the exterior sideview mirrors limit rearward visibility. Larger mirrors would be a welcome addition.

From a distance, our ZX4 ST test vehicle was easy on the eyes, dressed up with sharp 16-inch alloy wheels and a body-color rear spoiler. However, a close-up view exposed a few problems, including a misaligned hood and doors. The small decklid opens wide, exposing 14.8 cubic feet of cargo volume, though the Sony sound system’s subwoofer took up a good chunk of that space.

While the exterior has been warmed over, getting the award for most improved is the interior of the 2005 Ford Focus. For those unfamiliar with the cockpit of last year’s Focus, envision edgy design gone awry. Smooth, subtle lines were not the goal of the first generation model, though they’ve arrived for the 2005 model year. From a driver’s perspective, the new Focus may look like an import competitor, unless too much attention is paid to the details. Lest anyone start thinking this is not an economy car, have a gander at the hard, shiny pillar covers, possibly the most insubstantial sunvisors found in a modern car, or the occasional trim piece that looks as though it was grabbed off the assembly line a bit early.

Despite the short list of negatives, traveling in the 2005 Ford Focus is an overall positive experience. Front and rear seats are comfortable and well bolstered, though drivers would likely welcome a lumbar adjustment for long drives. A fold-down center armrest is standard on all but the S models, and is well placed with a bin containing enough space for cell phones, parking cards or other small items. Matching fabric on the door panels adds a nice touch, and sizeable front door storage pockets improve functionality. SES and ST models include a thick, leather-wrapped, tilt and telescoping steering wheel, which serves to add a bit of a sporting feel. Steering wheel-mounted radio and cruise controls, also standard on these models, are well placed but feel cheap. Instrument panel controls are simple to access and understand. Finally, all 2005 Ford Focus models have a height-adjustable driver’s seat so most people should be able to find a position to their liking. The rear 60/40 split bench seat folds down, increasing cargo room and versatility, and is positioned at a height that allows for easy entry and exit. Rear headroom and legroom are sufficient, but not commodious.

Priced at about $500 on our ZX4 ST, the optional Sony sound system was a disappointment. When either traveling at low speeds or with all of the windows up, the system offered decent sound quality. However, at higher volume or while cruising with all of the windows down, sound quality suffered. Considering that a six-disc CD changer and MP3 player are already standard equipment on the ZX4 ST, coupled with the amount of precious space the Sony system’s subwoofer occupies in the trunk, we’d probably cross it off our options list.

With good looks, a comfortable interior and a decent price, it seems that the 2005 Ford Focus has a lot going for it. Driving this economy sedan will only solidify that impression.

Good times abounded while the 2005 Ford Focus ZX4 ST was visiting our offices. With 151 horsepower and 154 lb.-ft. of torque, the 2.3-liter, four-cylinder engine exhibited good throttle response and respectable highway passing ability, all while returning 23.9 mpg. Rowing through the gears of the five-speed manual transmission is like running a hot knife through butter. Yes, that’s an exaggeration, but the gearbox is tight, the short-throw shifts are a cinch to execute, and creeping along in clogged traffic isn’t a big deal thanks to the light effort of the clutch. Drivers won’t likely win any drag races, but spinning the tachometer between stoplights should prove to be sufficiently entertaining.

Ford says that the suspension bolted onto the ZX4 ST is “SVT-inspired,” referring to the company’s Special Vehicle Team and its now defunct SVT Focus, a 170-horsepower road rocket based on the ZX3 hatchback. That’s like saying the artwork sold at Wal-Mart is inspired by Picasso. On the surface they may look the same, but as they say, “the devil is in the details.” For normal city driving or playing a bit in the corners, the suspension does its job quite well. Bumps and road abnormalities are typically taken in stride. Push it a bit harder, though, and the body begins to roll and the Pirelli tires lose interest in gripping the road. The result is a car that tends to drift through high-speed maneuvers, rather than hold a tight line along the intended route. Steering is firm with good road feel, although the ST’s tires hunted on grooved road surfaces. The ZX4 ST is the only Focus model with standard four-wheel disc, antilock brakes, a setup that provides excellent pedal feel, modulation and response. Even after a bout of aggressive driving, braking power was not diminished.

Over the past several years, domestic auto manufacturers have relinquished more and more of the market to reliable, sometimes sportier import competitors with their confidence-inspiring warranties and superior overall value. With the Focus, Ford has shown that the economy car market won’t be handed over quite so easily. That’s especially true with the updated 2005 Ford Focus, an attractive car that’s fun to drive, can be decked out with some very cool options, and is backed by an impressive five-year/100,000-mile powertrain warranty.

Finally, an American car that that deserves the attention of traditional import shoppers.

The SVT Focus is no longer available? That’s correct. The last SVT Focus models were built for the 2004 model year, and production is not expected to resume anytime in the future. That makes the 2005 Ford Focus ZX4 ST the “sportiest” model currently available.

What kind of warranty coverage comes with the 2005 Ford Focus? The basic warranty is good for three-years/36,000-miles. Compared with competing brands such as Hyundai, Kia, Mazda, and Mitsubishi, that coverage is relatively weak. However, the five-year/100,000-mile powertrain warranty, while not class-leading, certainly takes some of the worry out of buying a new Focus.

Are rebates and incentives available with the 2005 Ford Focus? At the time of this writing, there is a $2,000 rebate on the 2005 Focus, and financing offers of 0-percent for 48 months, 0.9-percent for 60 months, and 2.9-percent for 72 months. These types of offers will likely continue, if not get even better. 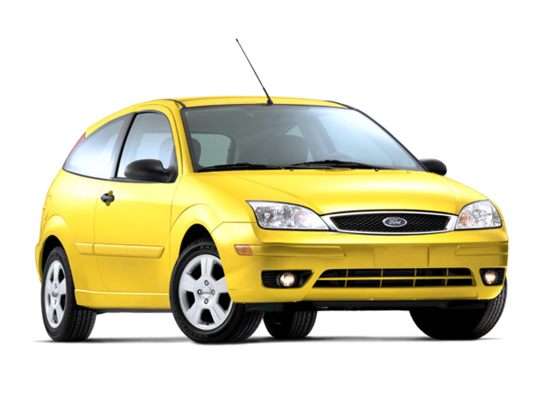