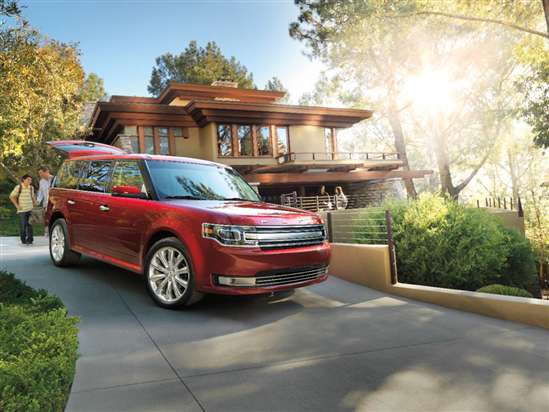 In a year following a substantial update to the Flex, Ford makes no changes except to introduce new Oxford White and Sunset paint colors.

Ford installs a 287-horsepower, 3.5-liter V-6 engine in every 2014 Flex. It drives the front wheels through a 6-speed automatic transmission. All-wheel drive is optional.

A twin-turbocharged 3.5-liter EcoBoost V-6 is optional for the Flex Limited, delivering 365 horsepower to all four of the SUV’s wheels. The increase in torque is even more substantial, rising from 254 lb.-ft. with the standard V-6 to 350 lb.-ft. with the EcoBoost engine, and peaking lower in the rev range.

Stick with the standard drivetrain setup, and the Flex is rated to return 20 mpg in combined driving. Select AWD, and that figure drops to 19 mpg. The twin-turbocharged EcoBoost V-6 and AWD is estimated to get 18 mpg.

Crash-test ratings for the 2014 Flex are unavailable as this summary was published. The National Highway Traffic Safety Administration (NHTSA) has not tested the Flex since it was restyled for the 2013 model year. The Insurance Institute for Highway Safety (IIHS) assessed the 2013 Flex, and gave it “Good” ratings for moderate overlap frontal-impact, side-impact, rear-impact, and roof crush strength performance.

Standard equipment includes Ford’s Sync Bluetooth connectivity with 911 Assist service, which activates when the airbags deploy to help speed rescuers to the scene of the crash. The Flex is also equipped with standard MyKey programmable safety technology, which allows the owner to limit vehicle speed and stereo volume, encourage seat belt use, and defeat the ability to turn safety systems off.

Any 2014 Flex can be optioned with inflatable rear seat belts, which are designed to help cushion impact force in a collision. A reversing camera, rear cross-traffic alert, and a blind spot information system are options for the SEL model, while the Limited can be upgraded with adaptive cruise control and a Forward Collision Warning with Brake Support system.

Active Park Assist is also offered for the Flex, helping to steer the SUV into parallel parking spaces while the driver operates the transmission and foot pedals. Navigation, a rear-seat entertainment system, a refrigerated second-row console box, and MyFord Touch technology are also available for the 2014 Flex.