The Ford Flex is a recently updated full-size crossover that stands apart from other vehicles in its segment through its flat-roofed styling that is more reminiscent of 60's-era surf wagons than the bulbous people movers of recent years.  The Ford Flex is also an extremely practical vehicle, offering large amounts of room for as many as seven passenger across three rows as well as a total cargo rating of 83 cubic feet.  The Flex comes with safety gear such as side airbags, forward airbags, side curtain airbags, and rear parking assistance as standard equipment, along with electronic stability control and traction control.

The Ford Flex starts out with a 3.5-liter V-6 engine under the hood, and this unit is rated at 285 horsepower and 255 lb-ft of torque.  All-wheel drive is optional with the base V-6, and fuel economy shows as 18-mpg city and 25-mpg highway.  The Flex is also offered with an EcoBoost version of this same motor which makes use of twin turbochargers to grind out 355 horsepower and 355 lb-ft of torque.  The turbo Flex features standard all-wheel drive and reports fuel mileage figures of 16-mpg city and 21-mpg highway.  Both models come with a six-speed automatic transmission.

Several options packages can be ordered with the Ford Flex.  Packages 201A and 202A can equip the Flex SEL to the same standard as the Flex Limited, while packages 301A and 303A add enhanced safety equipment to the top-level Limited (adaptive cruise control with collision warning) along with additional comfort and convenience features (automatic parallel parking, heated seats in the second row, ventilated front seats).

A list of cars similar to the Flex includes the 2012 Chevrolet Traverse, 2012 Dodge Durango and 2012 Honda Pilot. 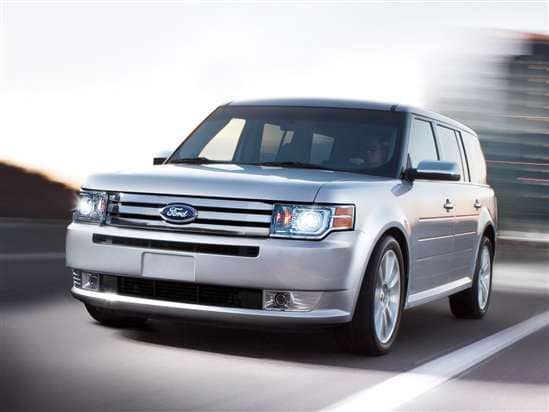