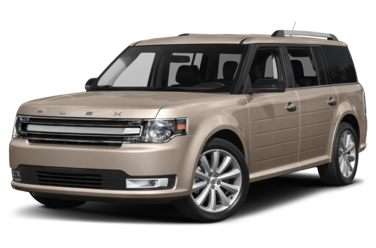 All About Ford Flex

The Ford Flex is a four-door crossover that seats up to seven passengers. The Ford Flex is manufactured in Oakville, Ontario, Canada alongside the Ford Edge, Lincoln MKX and a future full-size crossover, the Lincoln MKT. Main competition to the Flex include the Chevrolet Traverse, Hyundai Veracruz and Dodge Journey.

When Ford canceled its minivan programs it was in part a response to the sea change that was underway in terms of consumer attention - which was shifting from vans and moving towards sport-utility vehicles. On the strength of the popularity of the 2006 Ford Fairlane concept, which introduced a crossover vehicle with a definite 60’s woody wagon feel, Ford decided to follow through and develop a full-size crossover that would capture the same spirit and styling. This is how the 2009 Ford Flex came to be born.

The Ford Flex looks like nothing else on the road. The long, slab-sided lines of the Flex are scored by three horizontal ribs on both side doors, and this square feeling carries over to the chrome-embossed rear tailgate. The flat roof has a chopped look, and really harkens back to the days when one could strap a couple of surfboards to the roof of their car and head on down to the beach. That is not to say that the Flex seems juvenile – rather, it looks classic, an excellent synthesis of the most positive aspects of 1950’s and 1960’s design.

Inside the Flex, more interesting features can be found. Three rows of passengers can fit comfortable into the vehicle, and in between the second row seats there is a console housing a mini-refrigerator. Interior lighting can be programmed to display in one of several colors, mimicking the recent trend from some German automakers in terms of providing soft background lights. The Ford SYNC system is of course available, making integration of MP3 players, telephones and other Bluetooth devices into the Flex’s entertainment system easy. Finally, the double-glass sunroof that can also be found in the Edge can be had as an option. The Flex can be optioned to the gills with luxury items and passenger comforts, such as power leather seats, navigation, a rear-view camera for parking and upgraded interior accents. There are three trim levels for the Flex: SE, SEL and Limited.

Under the hood, the now-familiar 3.5 liter Duratec V6 can be found making 262 horsepower, more than enough to get the Flex moving from point A to point B. Shifting is handled by Ford’s excellent 6-speed automatic transmission. A version of the EcoBoost direct-injection, turbocharged V6 is said to be in the pipeline, and this will push the Flex to well over 300 horsepower. This level of performance will have the vehicle competing against an entirely new stratosphere of crossovers.

The Ford Flex is a truly inventive piece of design from the Detroit-based automaker. With space for seven passengers and ample cargo capacity, the Flex is truly a worthy minivan replacement. Optional all-wheel drive and fuel economy that registers at 16 miles per gallon in the city and 22 miles per gallon on the highway also make it a contender to replace some of the large, thirstier SUV’s out there that are primarily used for shuttling passengers. The EcoBoost engine should provide the Flex with not only an upgrade in power, but also fuel mileage, broadening its appeal to a market which is increasingly focused on their cost at the pump.