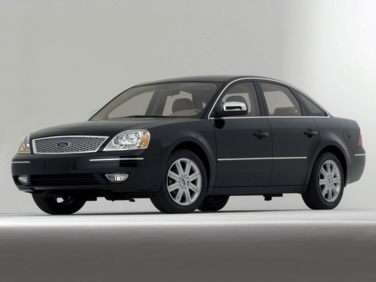 All About Ford Five Hundred

The Ford Five Hundred was designed as the flagship large sedan meant to lead the company into the new millennium. Released in 2005, the Five Hundred continued a tradition that had been started by the Ford Taurus, and with the planned obsolescence of the Ford Crown Victoria, the Five Hundred seemed poised to take its place as the most spacious sedan in the Ford lineup. The name itself harkened back to an era when several Ford vehicles had the number 500 appended to their model name in order to denote trim level.

The 2007 Ford Five Hundred presents styling that most closely resembles a North American interpretation of the Volkswagen Passat. A pleasantly arched roofline descends to a short trunk lid, while the front end is angled and flat with large headlights and an open grille. There is only one engine choice to be had for the sedan, a 203 horsepower, 3.0 liter V6 that generates 207 lb-ft of torque. The Five Hundred is available with either a 6-speed automatic transmission and front-wheel or all-wheel drive with a continuously-variable unit.

The Five Hundred comes in three different trim levels. The SE is well equipped with air conditioning and power door locks and mirrors, in addition to remote keyless entry. The SEL upgrades the interior with leather accents, a nicer stereo system and a trip computer, as well as dual climate controls. The Limited is the top of the line edition of the Five Hundred, and with leather seats and larger wheels it is the most attractive and comfortable of the three versions. The interior of the Five Hundred is indeed as large as Ford makes it out to be, topping even the enormous Crown Victoria when it comes to usable space. The trunk is also generously appointed in terms of the amount of cargo it can swallow.

Out on the road, the Five Hundred is capable of keeping up with most of the competition in terms of acceleration and highway cruising. The V6 does not overpower the car, and the independent suspension handles most road surfaces and elevation changes with ease. In front-wheel drive trim, the Five Hundred turns in 21 miles per gallon in the city and 29 on the highway, excellent numbers for a vehicle of this size. The all-wheel drive edition pays a penalty in fuel economy but contributes improved traction, especially in inclement weather. The Five Hundred does not provide the same type of driving experience as a rear-wheel drive European sedan, but in comparison with Japanese offerings it is well in line with the expectations of cross shoppers.

The 2007 Ford Five Hundred is an excellent family car that shines when it comes to interior room and fuel economy. The car bears an attractive design and while engine choice is limited, the modern 6-speed transmission and availability of all-wheel drive more than make up for it.

The Ford Five Hundred had its name changed to the Ford Taurus for the 2008 model year in order to cash in on the greater brand recognition.