The Ford Fiesta is a four door five passenger compact, available as a sedan or hatchback, and is available in 5 distinct trims starting with the S Sedan, SE Sedan, SE Hatch, SEL Sedan and SES Hatch.

The entry level Fiesta, the S Sedan sells for $13,200 and is powered by a gas sipping 1.6 Liter four cylinder that makes 120 HP and 112 lb-f of torque channeled through a standard five speed manual or an optional PowerShift six speed automatic that gets an estimated 29 MPG in the city and as much as 39 MPG on the highway.  The $14,670 SE Sedan and $15,670 SE Hatch come with features like a message center with trip computer and unique cloth buckets and is available with the sport appearance package that includes 15 inch painted aluminum wheels, LED parking lamps with black bezels and a rear spoiler.

The SEL Sedan starts at $16,600 and comes equipped from the factory with Ford SYNC, Sirius XM Satellite radio and LED parking lamps with chrome bezels, while the optional Upgrade package bundles in a push button starter, heated front seats, a chrome beltline and an antitheft perimeter alarm.

The top of the line Fiesta SES Hatch is just as well packaged as the SEL Sedan but is also available with the optional premium sport appearance package that includes a set of 16 inch polished rims, blacked out headlamps, lower grille surround, side view mirrors, window surrounds and matching rear hatch spoiler.  All starting at $17,500. 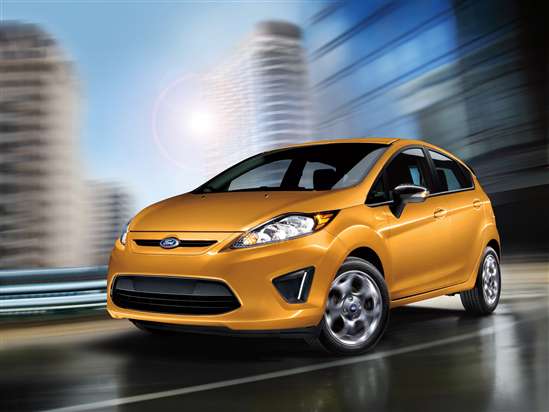