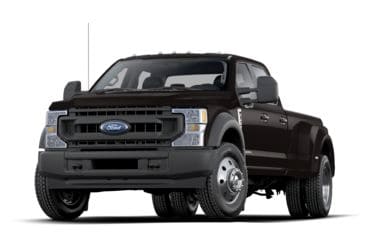 The Ford F-450 is a model from the American auto manufacturer’s long-running F-Series lineup of pickup trucks. The F-Series trucks have a range of capabilities from light duty to heavy duty, and the F-450 was designed to appeal to truck drivers who need mid-range capacity and power. The F-450 is also largely marketed toward fleet customers. Though the Ford F-Series trucks have been around for decades, the F-450 is part of the Ford Super Duty lineup that was released in 1998 for the 1999 model year. The Ford Super Duty name was actually introduced in 1960 for the heaviest of the F-Series vehicles, and was repurposed several times over the years, including on the 1987 chassis-cab Ford pickups. The Ford F-450 Super Duty is built at the Kentucky Truck Plant in Louisville, Kentucky, alongside the F-250, F-350, and F-550.

The Ford F-450 is a front-engine truck and is available in rear-wheel-drive or four-wheel-drive configurations. As part of the Super Duty series, it is larger and designed with a body-on-steel frame, complemented by heavier components such as axles, springs, brakes, and transmissions. As a result, the F-450 Super Duty boasts higher payload ratings and better towing capacity than Ford’s older trucks. Ford designed the F-450 so that the two-wheel-drive and four-wheel-drive models use the same frame and the same suspension.

The first generation of the Ford F-450 Super Duty was available from 1999 until 2007. Engine variants for the lineup included the 5.4-liter Triton V8, the 6.8-liter Triton V10, and two Power Stroke diesel V8s, a 6-liter and a 7.3-liter. These powerplants could be paired to a five-speed or six-speed manual transmission, or a four-speed or five-speed automatic. The Ford F-450, along with the F-550, could be configured in the XL, XLT and Lariat trim levels. The F-450 and the F-550 were treated to exterior updates for the 2005 model year. They received an extended front bumper and front fenders. The second generation was available from 2008 until 2010. Engine and transmission options were more focused for this generation, with the powerplant range whittled down to a 5.4-liter Triton V8, a 6.8-liter Triton V10, and a 6.4-liter Power Stroke diesel V8. A six-speed manual transmission was the standard offering for the Ford F-450, and a five-speed automatic transmission was available. For the third generation, starting in 2011, the Ford Super Duty lineup featured an aesthetic overhaul, revealed at the 2011 Chicago Auto Show. The front fascia was revised and enlarged, and a new lineup of engine options was revealed, designed to make the F-Series Super Duty lineup more competitive against the Chevy Silverado HD and the Chrysler RAM HD. Ford announced that the F-Series Super Duty lineup features steel frames that are thicker in gauge than other heavy duty trucks on the market. Equipped with a 6.7-liter Power Stroke turbo diesel V8, paired to a heavy duty six-speed automatic transmission, the Ford F-450 Super Duty boasts a towing capacity of 24,400 pounds and a max payload of 4920 pounds. As of the third generation of the Ford F-450 Super Duty, it is available only as a crew cab truck with an 8-foot bed, though it can be purchased in XL, XLT, Lariat, King Ranch, or Platinum trim.