Ford has redesigned its Super Duty line of pickups for 2017, and we’ve tested the big mama—the F-350, complete with a crew cab, long bed, and dual rear wheels. This is the “one-ton” variant of Ford’s pickup (though the label is a misnomer; today’s 350-class pickups haul a lot more than a ton), and we set out to put its work ethic to the test.

Is this much pickup really necessary?

Is this much pickup really necessary?

Before we delve into the ins and outs of the 2017 Ford F-350, we have to get something out of the way: One-ton dually pickups are a pain in the butt. Those dual rear wheels may look cool, but they stick out wider than the rest of the truck, which can make maneuvering, parking, and driving on narrow streets a stomach-churning experience. They have a turning circle as big as a city block, and with their heavy-duty suspensions, one-tonners are the hardest riding of pickups. With six wheels instead of four, replacing tires is more expensive, and checking tire pressure is vital—if the two tires on one wheel get low enough that they rub together, the friction can cause a fire.

We've talked to people who buy these big trucks because they need high payload and towing capacity, but today’s pickups haul more than ever, and a dually isn’t necessarily necessary. The single-axle version of the F-350 has a maximum payload of 4,430 lbs and will tow up to 21,500 lbs, and even the more-softly-sprung F-250 will haul 4,200 lbs and tow 18,600 lbs—numbers that exceed the one-ton pickups from just a few years ago. That said, if you want big numbers, the F-350 dually delivers: Depending on how it is equipped, its payload tops out at 7,630 lbs (nearly four tons!) and towing at a staggering 32,000 lbs.

A heavy-duty pickup you can live with.

A heavy-duty pickup you can live with.

With that caveat aside, we have to compliment Ford on what a nice job they've done making life with a one-ton as easy as can be. There's not much that can be done about the big truck’s turning circle, though Ford has tried with a new variable-ratio steering system that requires fewer turns of the steering wheel at lower speed, significantly reducing steering-wheel-twirling in parking lot maneuvers.

Out on the open road, we found the giant Ford relatively easy to drive, with big dual-section side-view mirrors that could be adjusted to show us both the view behind and the location of the rear wheels. (The big mirrors have another advantage: If they fit into a narrow space, the rear wheels will fit, too.) And we were impressed by the F-350's ride quality. Like most pickups, it shakes on sectional freeway pavement, but for the most part we found it relatively smooth and comfortable compared to other one-tons we've driven recently.

2017 is the first ground-up redesign of the Super Duty in 19 years, and they've made a lot of changes, chief among them being a switch from steel to aluminum for the cab and bed. Ford’s half-ton F-150 changed to aluminum construction in 2015; the focus was on reducing weight to increase fuel economy and hauling capacity. (Given the same chassis carrying capacity, if the body weighs less, the payload capacity rises by the same amount.) With the Super Duty—which is heavy enough that Ford isn't required to publish EPA fuel economy estimates—Ford “reinvested” the weight savings. Weight gains from a stronger frame and beefier drive axles were offset by the lighter-weight body, and in fact the new Super Duty weighs a bit less than the old one—in the in the same sense that a 4-bedroom house weighs a bit less than a 5-bedroom house.

From Steel to Aluminum

From Steel to Aluminum

The change to aluminum also allowed for a critical cost-saving move: The Super Duty now uses the same cab as the F-150, though the front clip (fenders, hood, front fascia) is unique. The cab loses a bid of width compared to the outgoing Super Duty, but it picks up length, with useful increases in rear-seat legroom for both the Super Cab and the Crew Cab. The dashboard is nearly identical to that of the F-150, and that is just fine with us: This new dash is cohesively designed and easy to use, and Ford's simplified touch-screen stereo and navigation system is a pleasure to use, especially compared to the old MyFord Touch system.

A video display on the instrument panel will tell you nearly anything about the truck you want to know, and allows owners to add the information most helpful to them to a “favorites” screen. There's plenty of useful information for hauling and towing, including a transmission temperature gauge and a gain indicator for the built-in trailer brake controller.

Under the hood: Turning up the torque.

Under the hood: Turning up the torque.

Ford upgraded their 6.7-liter Power Stroke turbodiesel in 2015, and the engine is basically a carry-over from last year, though it has been repackaged to fit the new truck. With new, heavier-duty drive axles and an opportunity to optimize the intake and exhaust systems, Ford engineers increased the diesel’s torque from 860 to 925 lbs. Horsepower is unchanged at 440, and the engine is biodiesel compatible for blends up to B20. The gasoline engine is last year's 6.2-liter V8, with torque bumped up to 430 lb-ft (up 25) and horsepower the same at 385. Both engines come with a 6-speed automatic transmission. Fuel tank capacity ranges from 24 gallons up to 48 gallons, great for long-distance trailer towing, and diesels have a 7.5-liter DEF  (Diesel Exhaust Fluid) tank. Ford isn't required to post EPA estimated fuel economy for these big trucks, but we averaged just over 13 MPG in our diesel tester. (We did a lot of stop-and-go city driving; the diesel delivers better numbers at steady freeway speeds.)

When testing pickups, we usually use our horse trailer for a lengthy test-tow, but with the F-350, we didn't think it was necessary: Even with two well-fed horses on board, our trailer maxes out at maybe 6,000 lbs. The F-350 4x4 we tested was equipped to tow 27,300 lbs, and we figured that unless we looked in the rear-view mirror, we'd never know our dinky little trailer was back there.

Besides, earlier in the year, Ford gave us the opportunity to tow significantly heavier trailers (including a large fifth-wheel horse hauler that we secretly lust after). With both fifth-wheel and bumper-tow trailers, the F-350's behavior and stability are exemplary. Our Ford had an optional 3” hitch receiver, larger than the 2” receiver on most trucks; it comes with “sleeves” that narrow the opening down to 2.5” or 2”. Lining all the sleeves up to connect our adjustable 2” hitch took some doing, but we love the flexibility—buying a bigger trailer no longer means you have to buy a new truck.

We did hook up our trailer to try out some of Ford's new trailer-friendly features. These, in our estimation, are among the best aspects of Ford's new Super Duty: They know how their customers use their trucks. The Super Duty has a built-in trailer brake controller, as do most fullsize pickups these days. Our test truck had cameras in the mirrors that give a wide-angle view to the side of the trailer for backing, and the blind spot monitoring system can be programmed to compensate for the extra length of the trailer—a feature that makes highway driving with a trailer much easier, especially for those who don't do it often.

Though we didn't get to try them (we didn't have the hardware), Ford told us about two other useful features: A backup camera that can be mounted on the back of the trailer with its image displayed on the F-350's infotainment screen, and tire pressure monitoring sensors that can be fitted to the trailer wheels and will report low trailer tire pressure on the truck's dashboard. These two features will do wonders to improve safety when trailering, and we applaud Ford for developing them for the new Super Duty.

When we tested Ford's half-ton F-150, we fell in love with the Trailer Backup Assist feature, which will steer the trailer for you in reverse (you twist a dial to point the trailer in the right direction, and the F-150 twirls the steering wheel all by itself). Ford wasn't able to fit this system to the Super Duty, since it uses hydraulically-assisted power steering rather than electric and therefore can't turn its own steering wheel. It does have the same electronics; you can apply a sticker to the trailer and program it into the Ford's dash, and instead of steering the trailer, it will prompt you how to turn the wheel. The system doesn't work as well as the fully-automated system in the F-150; even with the system’s guidance, we had trouble getting the trailer where we wanted it, and found we were better off just using the mirrors.

...but other backing features are better.

...but other backing features are better.

But there were other aspects of the system we did like: There is a trailer-angle display that warns you when you are getting close to jack-knifing, and a mode that switches the camera view based on trailer angle—as the trailer moves to the right, for example, the view gets wider on the right. Nice, but we'd rather see the full-on backing system in the Super Duty. (Perhaps we shouldn't complain; after all, neither Chevy nor Ram have anything even close to the Ford's backing-up aids. What can we say, Ford? You spoiled us with the F-150!)

Bottom line: A truck with the features we need.

Bottom line: A truck with the features we need.

All in all, we came away very impressed by the F-350. Ford has taken a good, hard look at what heavy-duty pickup buyers actually do with their trucks, and designed features that make their lives easier. They’ve also soundly trounced the competition on maximum payload and towing figures. And while giant pickups can be a handful, Ford has done what they can to make even their largest pickups easier to live with. We’re aware that some buyers choose pickup trucks for show, but a lot of people buy pickup trucks because they have jobs to do, and Ford has designed a heavy-duty pickup truck that is up to those heavy jobs. Well done, Ford. 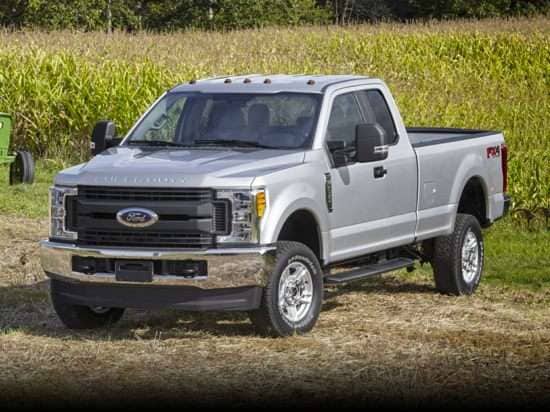