Once upon a time, you went to the dealership, bought a plain-Jane pickup with a few of the options you really needed - towing package, four-wheel drive, maybe a luxury or two like a carpeted headliner - and happily drove it home. Those days are long behind us, with full-size pickups like the Ford F-150 boasting not just a seemingly endless features list, but also a surprisingly comprehensive history of special editions. In fact, the last 25 years or so of F-150 production has generated five times as many unique models than were released during the initial 30 years of the Ford pickup's lifespan, showing just how competitive truck builders have had to become to capture the fleeting attention spans of modern buyers.

The Ford SVT Raptor, built between 2010 and 2014, presented Ford F-150 buyers with the most potent off-road package to ever leave a Ford showroom. In addition to a wider track, broader grille, and more aggressive bodywork, modifications to the F-150 as part of the SVT Raptor package included FOX shock absorbers, greatly enhanced suspension travel, all-terrain tires, and a standard 6.2-liter V-8 engine. The latter was good for 411 horsepower and 434 lb-ft of torque, and when paired with the SVT Raptor's six-speed automatic transmission and included four-wheel drive system it made the pickup nearly unstoppable once the pavement ended.

The Ford F-150 Harley-Davidson Edition debuted in 2000 as a way for diehard motorcycle buffs to wear their brand allegiance on their pickup. All four-door models, with a black or dark grey paint scheme set off by large Harley-Davidson badges and even a windshield decal, the Ford F-15 Harley Davison Edition was impossible to ignore (it also featured a unique grille as well as a mild sporty body kit). Savvy truck buyers seeking a little extra speed from their pickup targeted the 2002-2004 Harley-Davidson Editions for one important reason: the 340 horsepower, supercharged 5.4-liter V-8 engine that sat under its hood. Also capable of generating 425 lb-ft of torque, this blown eight-cylinder gave the F-150 a leg-up in the stoplight grand prix.

Ford's very first flirtation with building a cool special edition F-150 occurred in 1991 with the 'Nite' package. Clearly uncertain as to whether bread-and-butter pickup buyers were interested in a full-on performance truck, the Ford F-150 Nite was essentially a stripe package and blacked-out trim on top of black paint. Ford made somewhat of an effort to tighten up the truck's suspension, and the Nite models also came with nicer wheels than what you would find on other versions of the F-150, but by the end of 1992 it was clear to higher-ups in Dearborn that pickup fans were ready for something a little more intense in a special edition F-150 - which leads us to the next entry on our list.

The original F-150 to bear the Lightning name ran from 1993 to 1996. This version of the Ford F-150 SVT Lightning was notable for its single-cab, short box-only body style as well as its unique 5.8-liter engine which borrowed the Blue Oval's GT40 heads and made use of intake and camshaft tuning together with a throttle-body injection system to produce 240 horsepower and 340 lb-ft of torque. These were heady numbers for the early 90s, and the all-black Ford F-150 SVT Lightnings also received a few suspension upgrades to enhance handling for the body-on-frame design. A four-speed automatic transmission handled the shifting duties for the Lightning.

The Ford F-150 Foose Edition was the brand's stab at linking its ultra-popular pickup with one of the hot rod scene's best-known designers. Built for the 2008 model year, the Ford F-150 Foose Edition was low and mean, a four-door crew cab riding on a dropped chassis and 22-inch chrome rims. In addition to its smooth, near-shaved streamlining and Foose badging, this special edition F-150 also boasted a custom interior along with a 450 horsepower, supercharged 5.8-liter V-8 that made use of an intercooler to help it push out a stiff 500 lb-ft of torque.

In 1998, Ford elected to cash-in on the hype surrounding the unstoppable stock car racing empire built by NASCAR by way of the Ford F-150 NASCAR Edition. Truck racing had gone mainstream in the mid-90s, and Ford was eager to connect with buyers of the 'win on Sunday, sell on Monday' persuasion. To that end, the 1998 Ford F-150 NASCAR Edition came in short box, two-wheel drive single cab form, with raised yellow letter on its tires and blacked-out NASCAR-style rims. A mesh grille, a one-inch drop, dual exhaust tips, and a front air dam completed the oval racer look for the pickup. No extra power was on tap from its 231 horsepower, 4.6-liter V-8, but you did have the option of either a four-speed automatic or five-speed manual transmission when ordering the NASCAR model.

The Ford F-150 Saleen S331 Supercharged wasn't exactly a factory model, but it does represent a significant performance upgrade for those seeking a special edition of the brand's full-size pickup. Based on the extended cab body style and available only with two-wheel drive, the Ford F-150 Saleen S331 Supercharged was initially offered in 2007, and counted on a supercharged version of the truck's 5.4-liter V-8 running through a side-exit exhaust system as its primary charm. Up to 450 horsepower were available from the S331 Supercharged, although it's also possible to find 325 horsepower, non-supercharged models (known simply as the S331) that resemble their mightier siblings by way of their 23-inch rims and extroverted body kit.

If money is no object, and if you're looking to relive your childhood, then it's hard to do better than the Ford F-150 Tonka. Built by Tuscany Motor Company and based off of the 2013-2014 Ford F-150, the Tonka edition adds a six-inch Pro-Comp suspension lift, unique Tonka interior accents, 20-inch Tonka wheels, high-performance shocks, as well as hood scoops, Tonka-inspired body mods, and a bright yellow paint job. The catch? You had to provide Tuscany with a Lariat Crew Cab edition of the F-150, and then fork over additional cash for the conversion (about $76,000 in total), which means any secondhand Tonkas that you find for sale won't be cheap.

Notice the slight difference in the name? The Ford SVT Lightning dropped the 'F-150' from its badge but picked up a heaping helping of attitude when it was introduced in 1999. Initially, the short-box, single-cab SVT Lightning delivered 360 horsepower and 440 lb-ft of torque from its supercharged 5.4-liter V-8, but these numbers grew to 380 horses and 450 lb-ft in 2001. A four-speed automatic handle the shifting duties for the Ford SVT Lightning, which was capable of hitting 60-mph from a standing start in a mere 5.2 seconds. A full suite of handling upgrades were also on hand with the SVT package, making the Lightning the most formidable performance truck of its era.

Another bit of wordplay sees us wrapping up this list of the coolest special edition Ford F-150 trucks with the Ford F-150 Raptor. The SVT division is dead and buried at Ford, but its spirit lives on in the upcoming Raptor replacement, which is scheduled to arrive in showrooms as a 2017 model. The same general off-road ready principles apply in the design of the new F-150 Raptor, but a new twin-turbo EcoBoost V-6 displacing 3.5-liters takes the place of the previous truck's 6.2-liter V-8, with a promised horsepower boost that should approach the 500 mark. Also along for the ride is a trick 10-speed automatic transmission, the first of its kind for Ford. 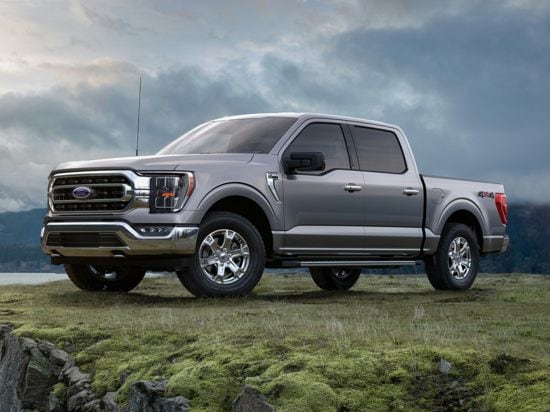