The Ford F-150 Raptor remains a unique proposition. To roll out its second-generation Raptor to the media, Ford invited the press to an exclusive testing facility in the Southern California desert. Our destination was the Anza-Borrego Desert State Park, which occupies 600,000 acres, much of it within San Diego County. The park includes a wide range of terrain and road surfaces and is the second largest state park in the contiguous United States. While Ford uses Anza-Borrego for extreme testing, the U.S. military uses it as a bombing range. Today, it was our playground to test the only production pickup on the market designed to tackle the desert at 100 mph...

The second-generation Raptor represents a radical powertrain departure, thanks to a high-output 3.5-liter EcoBoost V6 under the hood. The 2010 Raptor debuted with a 310-horsepower 5.4-liter V8 as standard equipment, with a 411-hp 6.2-liter V8 offered as a $3000 upgrade. The 6.2-liter V8 produced a healthy 434 pound-feet of torque and became standard in 2011. However, it now seems like naturally aspirated V8s are old news. The 2017 Raptor’s 3.5-liter EcoBoost V6 tops the 6.2 by a significant margin, with a factory-rated 450 horsepower and 510 pound-feet of torque. Not only is it more powerful, it’s more fuel efficient to boot, giving the 2017 Raptor official EPA ratings of 15 mpg city/18 mpg highway. While that may not seem impressive, the previous Raptor was rated at 11 mpg city/16 mpg highway. Auto stop/start is standard. The SuperCab 2017 Raptor is equipped with a 26-gallon fuel tank; the SuperCrew benefits from a 36-gallon tank.

The 2017 Raptor is the first Ford to use a 10-speed automatic transmission, a gearbox developed in tandem with General Motors. While 10 speeds may sound excessive, there are distinct advantages, particularly on the highway. “The step sizes between ratios are smaller than any other transmission on the market,” explained Kurt Nickerson, the Raptor’s technical leader for transmission attributes and calibration. “If you’re really into it, and want to accelerate quickly, the small step size keeps the engine at the power point. It helps maximize the acceleration capability in the engine.”

Ten speeds deliver benefits for efficiency as well as performance. “On the flip side of that,” Nickerson continued, “if you’re driving gentle those small ratio steps help keep the rpm low. It’s great for fuel economy. It’s a win-win in both situations.” The transmission’s trailer/tow mode changes shift points and provides engine braking. The 2017 Raptor has a maximum payload capacity of 3270 pounds and a maximum towing capacity of 12,200 lb. when properly equipped.

A wider track, flared wheel arches, and purpose-built bumpers accommodate a dramatic increase in Raptor suspension travel. The high-strength steel box frame is unique to the Raptor with the average ground clearance raised two inches over the first generation. Fox Racing shock absorbers—engineered jointly by Ford and Fox—are used at all four corners, with coil springs at the front and leaf springs out back. The Fox units use nine-stage bypass damping and allow for 13 inches of travel up front and 13.9 inches at the rear (an increase of 5.7 and 4.4 inches, respectively, over the F-150 FX4). The BFGoodrich All-Terrain KO2 tires are not off the shelf units, they’re engineered specifically for the truck. While the Raptor’s optional “bead-lock capable” wheels ($1165) are not true bead-locks, Ford offers bead-locks at an additional cost.

The Raptor’s advanced transfer case allows for half-dozen drive modes (Normal, Sport, Weather, Rock, Sand, and Mud) providing unparalleled versatility over the widest range of road surface. As we set out from San Diego to Borrego Springs, the route unfolded with mile after mile of delightfully twisty canyon roads, which the Raptor devoured with poise and confidence. The endless curves provided the ideal venue to demonstrate the truck's on-road competence in Normal and Sport modes, which was most impressive considering the aggressive tread of the BFGoodrich All-Terrain KO2 tires.

No sane person would push the truck to 9/10ths on the street with off-road rubber like this, but the ride was wonderfully smooth within the realm of sanity. The Raptor’s 10-speed automatic moved acceptably through the gears as the EcoBoost V6 delivered effortless acceleration. Ford says the Raptor will hit 60 mph in under six seconds. While some might argue that Normal mode is too soft and Sport is too harsh, that's to be expected. This is a remarkably well-behaved and comfortable truck.

Built to tackle the tough stuff.

Built to tackle the tough stuff.

The off-road drive was split into rock climb and high-speed desert driving segments. The rock climb provided ample proof of the Raptor's ability to effortlessly conquer rock-strewn trails in Rock mode with opportunities to experience extreme suspension articulation and confidence driving foot-off with hill descent control. We were required to don helmets and HANS head and neck restraints for the desert drive. In this segment, we were paired up with professional test drivers. With pros in the shotgun seat, we were encouraged to drive flat-out across the sands in Baja mode as fast as we dared. Some drivers eclipsed the 100-mph mark, a feat unfathomable in any other production pickup truck. Also, sliding the Raptor around a deep sand bowl at in Sand mode was an absolute hoot.

The exterior styling of the 2017 Ford Raptor is functional without frills. The huge grille is emblazoned with enormous Ford lettering in extended width capital letters and a trio of amber marker lights. They’re not just for looks. The Raptor is a half-foot wider than the standard F-150, and an additional pair of marker lights adorns the front fender flares. The beefy aluminum front skid plate leads into a remarkably smooth belly with panels that protect the underside of the truck while improving aerodynamics. The grille too, aids aero efficiency with automatic shutters that close at speed. The nose-up design allows for a 30-degree front approach angle. Similarly, the tail has been tweaked to deliver a 23-degree departure angle.

SuperCab and SuperCrew Raptors are offered at an MSRP of $48,325 and $51,310, respectively. The Raptor is available only with a 5.5-foot box. You can bring the great outdoors into the cabin with gigantic twin-panel moonroof ($1295), but only in the SuperCrew. The Raptor Technology option package ($1950) includes adaptive cruise control with collision mitigation, lane keep, lane-departure warning, auto high beams, and rain-sensing wipers. Additional optional safety equipment includes a 360-degree camera system, and blind-spot mirrors with cross-traffic-alert. A rearview camera with dynamic hitch assist is standard. The 802A option group ($9345) builds on the 801 package and is jam-packed with features, including a 4.10:1 front axle, LED exterior lighting, remote start, ventilated front buckets, and Pro Trailer Backup Assist.

The 2017 F-150 Raptor remains unchallenged as the off-road king, but the competition is heating up across town. It takes more than paint, tape, a lifted suspension, and a big set of fender flares to play in this league. Folks sat up and took notice when RAM trucks threw down the gloves with the 575-horsepower supercharged 6.2-liter Hemi V8-powered Ram Rebel TRX concept at the 2016 State Fair of Texas. Chevrolet countered at the Los Angeles Auto Show with a toughened up turbodiesel Colorado ZR2 kitted out with electronic locking differentials and trick adjustable Multimatic suspension. While the Ram Rebel is just a concept at this point, the Colorado ZR2 is slated to hit the lots in the spring of 2017.

On- or off-road, the 2017 Ford Raptor can tackle it all. While "plastics" was the most significant word in The Graduate, for the 2017 Raptor it has to be "aluminum." By using the lightweight metal, Ford has created a Raptor that weighs 500 lb. less than its predecessor.

And while the new Raptor has better suspension and more power, there is one big caveat—the 3.5-liter EcoBoost V6's preference for expensive premium fuel. You won’t get the factory-stated performance unless you pony up at the pump. The upside: Ford’s current EcoBoost engines are designed to run E15 fuel. We expect to see tuners offer high-octane tunes for E30 soon. 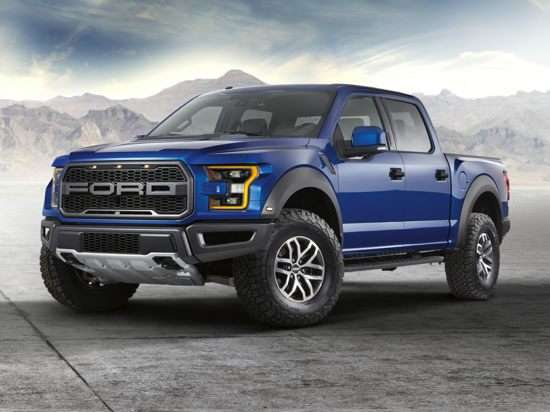