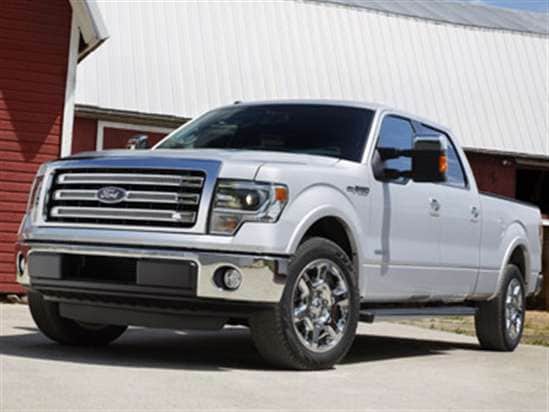 The 2013 Ford F-150 is sold in regular, extended, and crew cab body styles with a choice between three cargo bed lengths and 2-wheel or 4-wheel drive. The XL model is the base truck, while the new-for-2013 Limited is the top-of-the-line model. In between these two variants, Ford offers the F-150 in STX, XLT, FX2, FX4, Lariat, King Ranch, and Platinum trim levels. A factory-built, Baja-style off-road performance model called the SVT Raptor is also available.

According to the EPA, the 2013 Ford F-150 is expected to return between 11 mpg in the city for the SVT Raptor and 22 mpg on the highway with the 3.5-liter EcoBoost V-6 engine and 2WD. In combined driving, the F-150 is rated to get between 13 mpg and 18 mpg, depending on model and powertrain.

For 2013, the F-150 is offered with MyFord Touch, a touchscreen infotainment and navigation system. This version of MyFord Touch includes hard keys for audio and climate controls, making it easier to use for truck owners who wear gloves.

Additionally, all models except the base XL model are equipped with MyKey programmable safety features, and the 2013 F-150 is available with Sync AppLink voice-controlled mobile application technology. A Ford Work Solutions system is also optional, an in-dash computer with Tool Link tool tracking and inventory functions, and Crew Chief telematics and diagnostics technology.