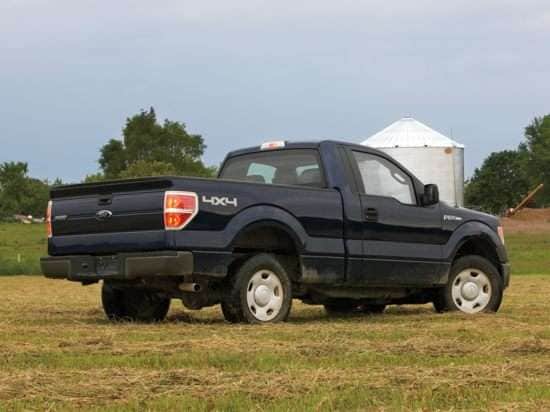 The 2009 Ford F-150 is a full-size pickup truck available in either two- or four-wheel drive with three cab options, three bed lengths and an amazing seven trim levels for a total of 35 distinct configurations. The trim levels vary greatly from the work-ready XL and off-road capable FX4 to the upscale King Ranch and obscenely luxurious (for a pickup) Platinum. The Ford F-150 has been the best-selling truck in North America for the last 30 years. Ford will launch the 2009 F-150 this fall to go head-to-head against the Chevrolet Silverado, GMC Sierra, Dodge Ram, Toyota Tundra and Nissan Titan.

Ford gave the F-150 a look that isn’t a huge departure from the previous model, while incorporating many design cues similar to other Ford Trucks. From the Expedition-like headlights and grille to the taillights and brushed metal tailgate appliqué similar to the upcoming Ford Flex, the F-150 is unmistakably Ford.

Like its predecessor, the 2009 F-150 features the big-rig styling in the front doors with the stepped down beltline for better visibility through the side mirrors. To further itself from some of the competition, Ford equipped the F-150 with the built-in tailgate step that was an instant success on the 2008 Super Duty. The upscale Platinum model offers automatic folding side steps and retractable cargo box side steps for easier access of items toward the front of the bed.

For commercial purposes, the regular cab and SuperCab F-150s will offer side-mounted storage compartments built into the bed that feature lockable, watertight doors an additional 26.3 cubic feet of safe and secure storage.

Among its seven different models, Ford offers a selection of 12 different styles of wheels ranging from 17-inch steel (XL) to 20-inch aluminum (Platinum. To further differentiate each model, Ford fits each truck with a unique grille that accentuates the truck’s design and purpose. On the XL, Ford uses a black plastic, rugged grille for a worksite-ready appearance, while the FX4 and STX models receive a blacked out grille with a body color surround for a sportier appearance. The XLT, Lariat and King Ranch all chrome grille with the latter of the two getting mesh grille inserts. While the other models use Ford’s three-bar grille setup made popular by the Ford Fusion, the F-150 Platinum gets its own unique grille design that uses a single bar across the middle and a mesh background.

From the driver’s seat, the all-new F-150 offers an instrument cluster similar to the Super Duty with two large gauges flanking a digital information readout and four smaller, rectangular gauges easily viewable along the upper edge of the cluster. The tall thin center stack integrates the stereo, HVAC and all other controls for a smooth, clean look. Ford’s popular SYNC in-car, voice activated communication system highlights the optional interior accessories that also include a 700-watt Sony surround sound system and reverse camera system.

With the rear bench seat folded up and out of the way, the F-150 offers a flat load floor – no hump through the middle of the floorboard. This allows larger, taller items to fit inside the cab that would normally have to be placed in the bed of the truck. The F-150 SuperCrew cab allows for a total of 57.6 cubic feet of cargo space behind the front seats.

Three engines will be available upon introduction: 5.4-liter 24-valve Triton V-8, 4.6-liter 24-valve V-8 or the 4.6-liter 16-valve V-8 (which features more horsepower and better fuel economy than the previous F-150’s V-6). While no V-6 engine is available, Ford has announced that 2010 F-150s will additionally offer a diesel engine as well as an EcoBoost turbocharged gasoline direct engine. Both engines offer improved power and better fuel economy from a smaller displacement. With integrated trailer brake controller and standard Trailer Sway Control, the F-150 makes towing easier and safer. No final numbers have been released, but Ford says the new F-150 “delivers the most towing capacity in the segment.”

The 2009 Ford F-150 has yet to be tested by the National Highway Traffic Safety Administration, but it will offer the following standard safety features: