Ford F-150 -- First Drive: One hundred years and it comes down to this: a small town, a big state and a truck that must climb a mountain between the expectations that will receive it and the reality of what it is.

This then, is Ford's shimmering hope for better days. The fact that America's maker of vehicles has chosen this vehicle, the new F-150, at this place and time - Texas is at the heart of Ford Truck Country -- says a lot about the company, what it hopes to achieve, and speaks directly to a rebirth that may have a lasting impact on the entire automotive industry.

The new 2004 F-150 is that good. It has to be. Succeed with the F-150, and renew confidence in Ford's product expertise. Fail, and drag down a pipeline full of new vehicles, poised for debut in the next two years. Like the swirling, lazy river that intersects the town of Gruene from the rest of Texas, this truck is the source of Ford's revival, and debuts at a critical time for the company. Just as Texans come to Gruene to drape themselves over patched inner tubes and float away from the stifling heat of summer, the success of this new F-150 is key to Ford's ability to withstand the heat from competitors who sensed that the old champ was vulnerable.

Granted, last year the F-150 accounted for 20% or more of Ford's total sales, and has been the truck segment leader for 26 years. Yet that 26th year was shaky, and the word was out - there was blood in the water. The F-150 was wimpy, slow and all around past its prime. The pressure was on, and competitors such as GM and Dodge began to chip away at Ford's loyal cadre of truck buyers through aggressive discounting and redesigns; there were also ominous noises from Nissan and Toyota about new full-size trucks, built to take a share of the U.S. truck business. Those noises have since turned into the Nissan Titan and the upcoming full-size Toyota Tundra - and they will take a share of the market, just like the Silverado and the Ram. The competition will not wilt at the sight of the new F-150, and will point to issues such as pricing, power and overall design as weaknesses.

Which is like saying that Texas is too big. It's still Texas, home of barbeque, bull-riding and all things western, where a truck has to meet a standard set in mud, highway miles and hauling power. If it works in Texas, it will work everywhere - which is why, according to Ford, they sell an F-Series pickup an average of every minute of every hour of every day. That makes it the perfect place to celebrate the revival of Ford's leading man as the company steps into the next centennial.

And my, what a revival. The 2004 Ford F-150 is loaded with class-leading innovations and a refined attention to detail not often seen in domestic vehicles. From the interior - which will surely have competing designers running for their sketch pads and vendor phone numbers - to the mechanical improvements, subtle design cues and improved torque, the F-150 is poised to continue its run of dominance over the competition.

The single, tinny loudspeaker blared and the gate swung open, expelling a rider on a healthy brown and white mottled bull. The bull heaved and hurled against the rider's grip, bucking and shaking, trying for all its might and muscle to remove the man on his back. After a few seconds of violent conflict, the rider was sent heels over head into the hard-packed red dirt, sprang to his feet and sprinted to the fence as the bull, still outraged over the impunity of the little man's attempt, twirled frantically and tried to finish the job. I watched, transfixed. Ford was lining up the journalists for another dog and pony show behind me, but right in front there was a rodeo going on - and no one knew it. Just the rider and bull, encircled by a rusted fence in the middle of a field of weeds.

This is Texas rodeo at the Lightning Ranch, stripped clean and presented fresh, a perfect place to talk about the F-150. Simple and clean in its design, presented fresh with an improved structure, the F-150's most significant improvements begin where no one is watching - underneath. Everything is wider - which creates a more aggressive look, and complements the new design. According to Ford data, the front track is 67.0 inches wide - an increase of 1.6 inches over the current F-150. The wider shoulders and beltline carry all the way through the box, with sharply cut design cues inherited from F-250.

It looks nice. It drives better. The wide track significantly improves the ride and handling, and the frame itself is approximately nine times stiffer in torsion and approximately 50-percent stiffer in bending than the 2003 version. This enables the new F-150 to make significant improvements in handling, ride and quietness. Ford engineers also improved the suspension, by using a coil-over-shock, long-spindle double wishbone front suspension with a cast aluminum lower control arm. A significant development - a first, in fact, for trucks - is the use of aluminum. This reduction in weight creates better ride and stability over rough roads. Another key to the F-150's ride and response improvements is the segment-first rear shock absorbers. Placed outside of the frame rails, the shocks reduce the amount the truck lean during lane changes and other maneuvers. This increased leverage enables the shocks to be tuned for a smoother ride.

It was the ride that made the difference on the way to Gruene from San Antonio. From interstate highways to backcountry roads, the F-150 was poised and in control. Road and wind noise was a faint murmur; conversation from back to front was easy, with no raised voices or strained necks. Most of all, the steering was superb, with very little wheel play and a real feel for the road. Again, according to Ford engineers, this improvement is due to new "gripping" bushings, which twist with the stabilizer bar and produce a more refined steering response. 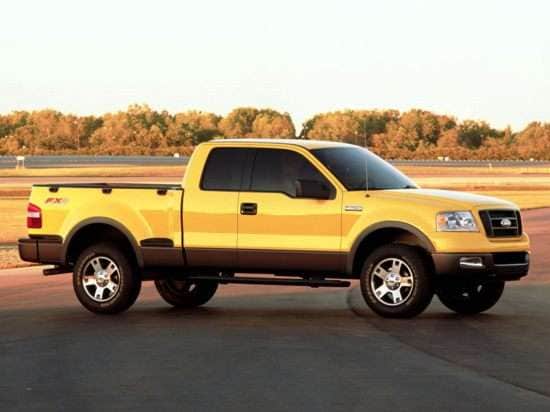