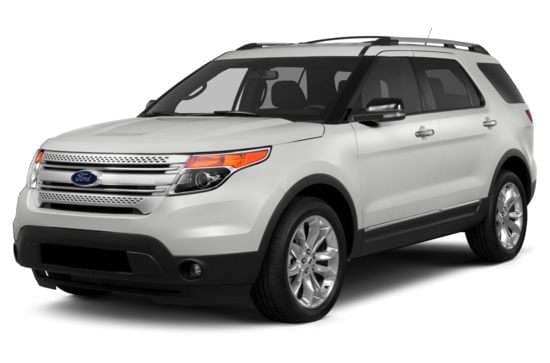 Changes for the 2015 Ford Explorer:

Four versions of the 2015 Explorer are on sale: Base, XLT, Limited, and Sport.

Most versions of the 2015 Explorer have a standard 290-horsepower, 3.5-liter V-6 engine. The Explorer Sport gets a twin-turbocharged, 3.5-liter EcoBoost V-6 good for 365 horsepower and 350 lb.-ft. of torque, the latter peaking at a low 3,500 rpm. Both engines are bolted to a 6-speed automatic transmission with SelectShift manual gear selection, and the Explorer Sport also has standard all-wheel drive.

A turbocharged, 2.0-liter EcoBoost 4-cylinder engine is optional for front-drive versions of the Explorer. It makes 240 horsepower and 270 lb.-ft., with torque peaking at 3,000 rpm. A 6-speed automatic without SelectShift capability is standard for the turbocharged Explorer, and AWD is not available with this engine.

The Explorer’s standard V-6 engine gets 20 mpg in combined driving with FWD, and 19 mpg with AWD. Upgrade to the Explorer Sport, and the EPA says you can expect to get 18 mpg. Alternatively, choose the smaller 2.0-liter EcoBoost 4-cylinder engine for 23 mpg.

Standard MyKey technology allows parents of young drivers to program speed warnings and limits, stereo volume limits, and to mute the stereo until the seat belts are buckled. All but the base Explorer include Sync smartphone connectivity with 911 Assist, which works to speed rescuers to the scene of an accident as long as a paired device is aboard the vehicle at the time of the collision.

According to the NHTSA, the 2015 Explorer gets a 5-star overall crash-test rating. The Insurance Institute for Highway Safety (IIHS) gives the Explorer top marks except in the small overlap frontal-impact test, in which the SUV receives a “Marginal” rating. Front crash prevention is rated as “Basic” by the IIHS.

Every Explorer is equipped with Curve Control, which helps the SUV get around a corner or curve if the driver is going too fast. A Terrain Management System is included with AWD models, featuring five different traction settings. A Hill Descent Control system is also included with AWD.

The Explorer is also available with optional Active Park Assist, which steers the SUV into a parallel parking space while the driver operates the pedals and transmission.