The name Explorer has been an entry in the automotive lexicon since 1990. Back then, the body-on-frame Ford made the Sport Utility Vehicle a mainstream machine, and there’s been no looking back since. Today, the fifth generation Ford Explorer has come a long way from its roots. In fact, the Explorer has gone the way of many of its competitors and switched to a car-based crossover platform. It’s also become quite a premium machine thanks to the available luxury amenities and technological goodies.

Still, some buyers are looking for more from their machines, and we’re not talking about fuel economy. We mean performance, and that’s something that’s been lacking from the Explorer lineup. Until now, that is, because Ford is bringing the 2013 Explorer Sport to a dealership near you, and it’s arriving with a twin-turbocharged V6 engine.

Performance, comfort, and style are doled out without a worry of “too much” in the minds of Ford designers and engineers. The 2013 Ford Explorer Sport is ready to do battle with the sportiest members of this segment… and one vehicle that might surprise you.

At first glance, it appears that pricing would be the Achilles Heel of the 2013 Explorer Sport. There’s just one version seeing as the Sport is a trim level branched off of the standard Explorer trim line. It’s also the most expensive Explorer, with a starting price of $40,720. That price can quickly rise close to $50,000 once you start throwing more options at it.

There’s no question that this is a very expensive Explorer. What you get for that price, and how it stacks up to the competition is where it begins to make more sense. Line up the Dodge Durango RT, Jeep Grand Cherokee SRT8, and, believe it or not, the Porsche Cayenne V6.

With the exception of the Dodge Durango RT, we’re comparing the three-row 2013 Explorer Sport to two-row vehicles. Why? Because we’re talking about performance crossover and sport utility vehicles. Both of the Chrysler products utilize V8 engines to produce their power, with the Durango running a 360-horsepower 5.7-liter V8 and the Grand Cherokee SRT8 more than making due with a 6.4-liter V8 that produces 470 horsepower. The Cayenne V6 is equipped with a 3.6-liter V6 that produces 300 horsepower.

Under the hood of the Explorer sits a twin-turbocharged V6 that produces 365 horsepower, and helps push the 4700-pound machine from 0-60 miles per hour in just 5.5 seconds. That’s a full second quicker than the Porsche, and just a few tenths behind the time put down by the Jeep. Of course, the Durango is slower and costs a few grand less.

Now, when you put the Explorer up against this group it’s here that the price point starts to make much more sense. The Ford is faster than the Porsche while also being heavier, and offers more room than the, admittedly, much sportier Grand Cherokee SRT8. However, the Porsche starts at nearly $50,000 and quickly gets way more expensive. Additionally, the Jeep will cost you at least $60,000.

Ford has gone to great lengths to ensure that everyone who sees the 2013 Explorer Sport knows exactly what they’re looking at. Up front there’s a wonderful contrast behind high-gloss and matte finish mesh in the grille, while the blacked-out treatment helps stretch the face into one seamless and menacing look. For the first time, the words “EXPLORER” stretch across the front of the hood.

Moving to the side, the dark 20-inch wheels feature the word “SPORT” cast right into the rollers, and the meaty tires look rather beefy because the wheels are a full half-inch wider than the ones found on the standard Explorer.

Around back, the Explorer Sport boasts a set of polished exhaust tips that work rather wonderfully for a visual pairing with the blacked out rear end. A Sport badge on the rear lets those behind the Explorer know that this particular crossover means business. The rear is finished with a roof spoiler that lends a very Range Rover-esque vibe to the exterior, and that’s a very good thing here because it further pushes the mind towards thoughts of premium and luxury machines.

Ford continues the Sport motif on the inside by way of a handful of stylish accent pieces. Immediately upon opening the doors, you’re greeted by lit nameplates. Contrasting stitching has been applied all over the place, and looks great on both the black interior as well as the optional Sienna version.

The front cabin space mirrors the treatment applied to the face of the Explorer Sport by wrapping around the occupants. Sport floor mats round out the look-at-me features, and the rest of the interior is filled with the standard upmarket Ford options. A Sony audio system with HD Radio pairs nicely with the eight-inch touchscreen and MyFord system.

The front seats are wonderfully padded and the power-adjustable thrones provide a more than ample space from which to pilot the Explorer Sport. The second row offers up decent room for nearly all passengers, and the available third row is best saved for short adults or children. You can also stuff tall children back there if they’re poorly behaved.

The heart and soul of the 2013 Ford Explorer Sport is undoubtedly found under the hood. EcoBoost is the name of the game, and we’re talking specifically about the 3.5-liter V6 unit applied here. Thanks to a pair of turbochargers, this six-cylinder mill pumps out 365 horsepower and 350 pound-feet of torque. All of that torque is available from 1,700 rpm up on through the rev range, which means the power band is abundant and nearly always there.

All of the power is sent to the paddle-shiftable six-speed automatic gearbox and on out to all four wheels. Ford has reworked the Terrain Management System to better make use of the added thrust. As a result, up to 50 percent of the power can be sent rearward. On top of that, the engineers fiddled with the final gear ratio, and changed it so that it’s easier to stay within the power band in all gears.

Still, despite all of that power, we’re talking about a V6 engine, which means that fuel economy should be a bit improved over a V8. No surprise here, as that is exactly the case. The 2013 Explorer Sport is rated to return 16 miles per gallon in the city and 22 miles per gallon out on the highway. Not too shabby for a nearly 5,000 pound, three-row crossover performance SUV with all-wheel-drive.

Ford has worked a bit of magic in terms of the engineering of the 2013 Explorer Sport. The body is stiffer, the wheels are wider, the brakes are bigger, and all of that works in concert with the engine and transmission to deliver an exciting driving experience. The first thing we noticed once we threw the beast into a few curves is that there’s very little body roll. That translates directly into driver confidence, which means we can push the Explorer Sport a bit harder and a bit faster than we initially believed. Should we get into a bit of trouble on a curve, all we have to do is apply the brakes and things get back in line quickly and smoothly.

The engine responds wonderfully to all inputs from our right foot, as well as the inputs from our hands on the paddles. When left alone, the transmission returns smooth shifts both up and down.  Still, there are times when we want to choose our own gear, and the cog swapper responds quickly to our demands. Pop the crossover down a gear mid corner and be prepared to be off on to the next turn as you would in the average sports car.

The 2013 Ford Explorer Sport isn’t as fast as the Jeep Grand Cherokee SRT8, but it’s also $20,000 cheaper. It is faster than a Porsche Cayenne V6, however, and that’s quite an achievement. Did we ever think we’d be comparing an Explorer to a Porsche? No… but not only can we do that here, we might be able to say that the Ford would be the winner. This comparison test might need to happen soon.

Just as Ford has instituted a slew of performance upgrades for the Explorer Sport, it’s also thrown a whole mess of safety system at it. In fact, many of the upgrades work as safety features as well. Bigger brakes lead to quicker stops, a stiffened body leads to greater confidence in turns, and wider wheels lead to greater levels of grip.

On top of that, the Ford Terrain Management System means that the driver can select the appropriate driving mode for the task at hand. If you run into mud, sand, rutted roads, or beautiful empty tarmac, you’re prepared for the trip.

There’s also a bit of safety wizardry happening in the cabin thanks to an industry first achievement. Ford has employed rear inflatable belts for the 2013 Explorer Sport. This means that there’s yet another layer of protection for all of the passengers inside the vehicle.

Before we lined up to drive the Explorer Sport, we expected to be treated to a tame driving experience and an exterior treated with meaningless badges.

How wrong we were.

The 2013 Explorer Sport is a true performance crossover suv that offers up nearly shocking levels of excitement. All of the changes under the skin pair perfectly with the wonderful 3.6-liter EcoBoost motor. Brakes, suspension, steering calibration, and the stiffened body produce a sports car-like driving sensation that will bring a smile to any enthusiast’s face.

It’s expensive, there’s no denying that, but it actually lines up perfectly with the vehicles that we believe it competes against. It’s faster and cheaper than the Porsche Cayenne, a few grand more expensive than the slower and less efficient Dodge Durango, and far cheaper than the supercar of the group that is the Jeep Grand Cherokee SRT8.

If you want near SRT8 levels of performance for less, than the 2013 Ford Explorer Sport is for you. Hell, if you just want to a roast Porsche Cayenne V6, it’s also up for the task.

Cons:
-Price seems high at first glance, which could scare some away. 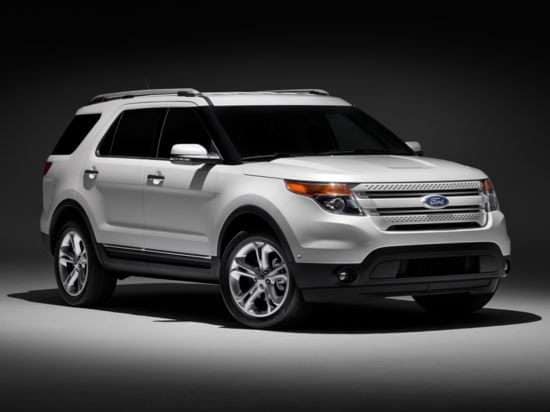